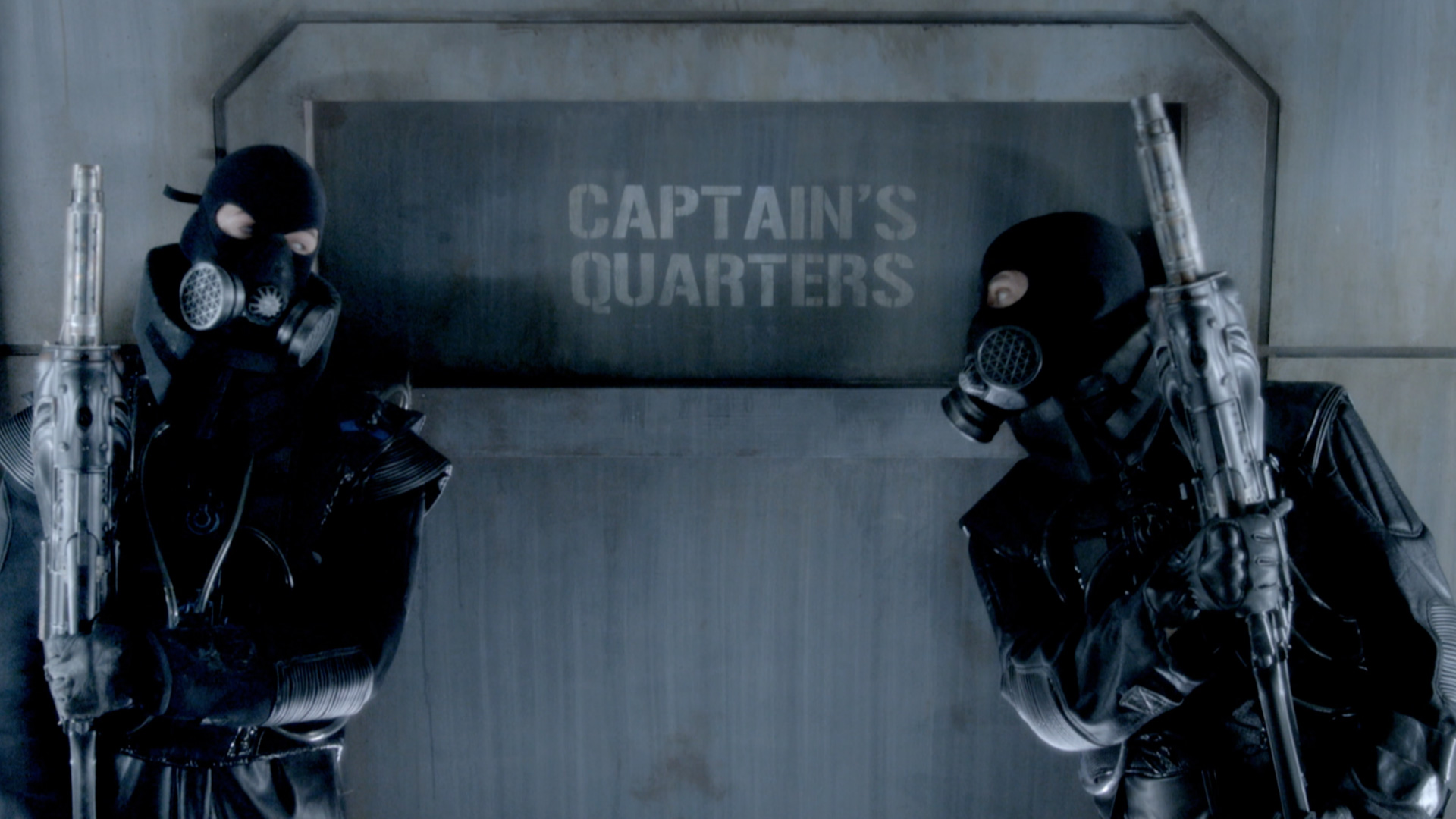 Whoever told you that nice guys finish last is a liar and they should be flogged. This week, Metal Hurlant Chronicles opens up its hour finale with an episode about a man who promptly announces that he’s having a bad day. Now, being seasoned MHC watchers, we know that nothing is as it seems. Stanley Summers (Dominique Pinon) returns and leads this one, entitled “Three Men on a Match.” Stanley plays an engineer on a starship, the Atlanta, that is in the middle of an explosion.

She dies, but at least we finally have an assertive female in a position of power (albeit she serves absolutely no purpose in the greater whole of this episode). The Atlanta’s captain (Yasmine Lafitte) uses her officers as her own personal boy toys in the privacy of her quarters. Awesome! So, lessons from MHC: women are either sex symbols, damsels in distress, or rapists. Fantastic! Thank you.

Stanley barely escapes in a pod that quickly abandons the rest of the ship, even though the pod holds eight people. He meets space commanders Kaskoff (Eriq Ebouaney) and Timarek (Craig Fairbrass), who explain to him that, in situations like this, it’s every man for himself. The men put in a request to a rescue ship and try to relax as they wait. Stanley browses through a copy of a Metal Hurlant comic and gets into an intense discussion with Timarek, who calls him “kiddo” although Stanley is clearly older than them both. Suddenly, there’s a crash and an alarm sounds, alerting the men that the oxygen on the ship is depleting. Timarek does the calculations and decides that there’s only enough air for two of them to make it to the rescue ship, Orpheon. Can you guess what happens?

Kaskoff and Timarek dump Stanley out of the ship and leave him to float about space. Stanley tries to communicate with them through the radio in his spacesuit, but there’s too much static, and the men don’t care much for what he has to say regardless. The two laugh at Stanley’s expense, traveling on until they encounter yet another problem on this tumultuous day. There’s less than an hour until they reach Orpheon, and Timarek realizes he miscalculated the rate of leakage. There’s no way that both men could survive on the dwindling air, so their solution: fight to the death. They rumble in the small space, probably contributing to the oxygen depletion, until Kaskoff kills Timarek.

His victory is short lived. There’s not enough oxygen for him either. Soon after murdering his comrade, Kaskoff dies from asphyxiation as his rescue countdown nears its end.

On Orpheon, the crew bags the bodies of Kaskoff and Timarek from the pod, and a voice tells them that he tried to tell them. Guess who? It truly is a good day for our Stanley because he walks away from this episode with his life and his freedom. The object that had crashed into their pod was none other than a tube of oxygen that kept Stanley inhaling until he reached safety. 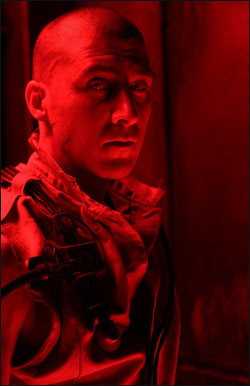 The last episode was actually a two-in-one special called “Red Light/Cold Hard Facts.” The protagonist is a prisoner (David Belle), trapped inside of a cell where a red light is emitted to subdue him. Through his narration we learn that people from the sky brought weapons to his planet, giving them to his people as well as their enemies. What resulted was an all-out war that nearly destroyed the entire population. He has no hope for survival or life. He only yearns to take one last look at the sky, or anything other than his prison and that horrible red light.

As the last act of heroism from the defeated young man, he plots to attack a guard. Using a pipe, he causes a disturbance and entices one (Cyrille Diabate) to his cell. The two fight and, after many wounds, the beast finally drops dead. The prisoner is out. He runs down the hall, and of course, by this time, the other guards know he’s escaped and are on the lookout for him.

The man runs out of the exit, and we learn that humans from Earth are the bad guys in this one. The strange-looking, foreign set of armor that cloaks the guards belongs to us. Fantastic. This is why we can’t have nice things. You see the mess we caused? At least the prisoner, with his red skin, yellow eyes, and black veins was able to see the colors of his world before the guards shot him down. Have you ever read “Harrison Bergeron” by Kurt Vonnegut? This short rings bells in my ears.

The next half of the episode fast-forwards us to the year 2312 on Earth. The world’s population has reached 57 billion and every major city has morphed into a large metropolis of concrete and machinery. At this point, my only thoughts were “pollution, pollution, pollution.” A team of archaeologists uncover a frozen storage of bodies in an old lab from the 21st century. At first glance, they all appear to be dead, but after a sweep in the sky from the Metal Hurlant, it appears that a man in one canister is actually alive.

Trez Trapoon (Guy Amram) gives his boss, Molan Drood (Jean-Yves Berteloot) the update on the mysterious frozen man. He tells him that the man has very little memory of the world he was born in and would not be able to comprehend their modern technological advances. Trez also includes that he fears the man may have brain damage because all he does is sit around and draw cartoons. Molan responds that unproductiveness cannot be tolerated in their civilization because they’re having a social meltdown. He then gives Trez the order to have the man killed. Trez noticeably looks regretful, but does as he’s told regardless. Wow, it must suck to wake up and then have your life taken away again.

In the man’s room (that looks more like a cell), guards enter and take him away from the drawing he was sketching at a table. It was a sketch of Mickey Mouse. 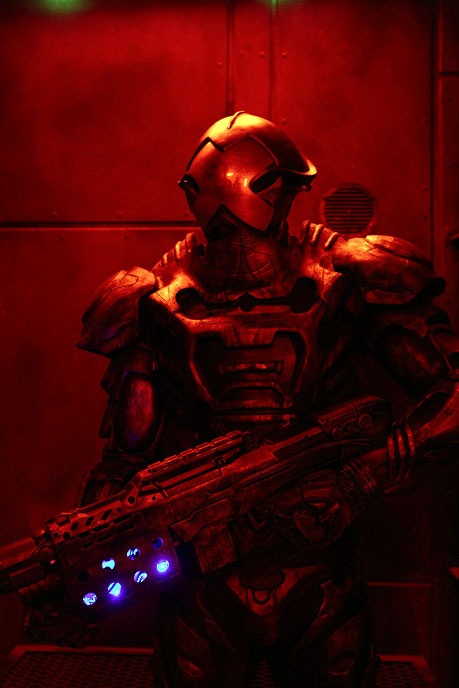 You have GOT to be kidding me. That dude’s Walt Disney? There’s a myth skating around that he was actually frozen, and his body is being kept somewhere at Disneyland. I wonder if this was to be Mr. Disney’s fate and, had he known it, would he have opted to be kept that way. MHC sure does love its ironies.

There’s no other way to say it, Metal Hurlant Chronicles brought it with these two episodes of the season finale. The anthology began airing on the Syfy network back in April, and proved that all good things must come to an end. The show had some hits and misses. If you check out my episode recaps, there were definitely some episodes that I could’ve lived and died without watching, but overall, not bad! The majority were ones that I did like,  and that surprised me. It makes me eager to see what else the creators could come up with. Like I said before, MHC is a mix of modern sci-fi with a feel of The Twilight Zone. I’m hoping the green light is flashing on a another season because I would like to see more innovative, introspective, and entertaining performances from this series. I think with some reworking and time this show could be really great.