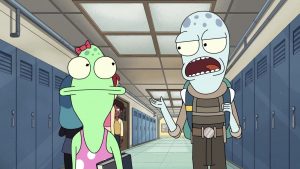 Knowing full well that Solar Opposites was made by some of the same team that worked on Rick and Morty gave me… expectations. And I was right in them. If you like Rick and Morty, then this is just more of the same nihilistic demented comedy.

But there are some differences, and highlighting them might help you decide if you want to try the new show or go to Rick and Morty if you haven’t already.

The first major difference is Solar Opposites is even more messed up than Rick and Morty moralistically and tastefully. It’s not as soul-crushing in its random moments of deep existential terror or sadness, but Solar is even more graphic and shocking.

Like, the gore is much more detailed, and somehow treated with even less concern for the people being killed. In the sister show, you get a sense that Rick doesn’t intentionally hurt people that don’t somewhat deserve it—even if the retribution is sometimes seriously over-severe. There’s a sense of evil getting destroyed often, even if a lot of innocents are collateral.

Not in Solar Opposites. 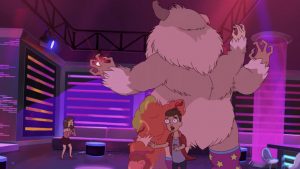 People are obliterated and mutilated with little regard. Within an episode, the body count is on the scale of a town. There never seems to be any blowback for it either, no legal retribution for criminal acts of any sort.

And then there’s the other content. The adult humor and just general shock humor. It can be messed up. Casual conversations can make you suddenly disgusted. Do not let children watch this show. Don’t let sensitive people watch this show.

It’s going to mess them up and possibly scar them. 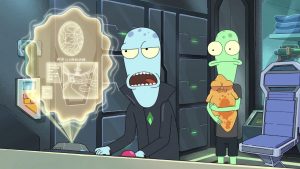 Like Rick and Morty, Solar Opposites has this sense of the absurd and heightened reality that sometimes makes it all worth it just by how brilliant or deeply funny it can be. It’s almost as if the constant bombardment of extreme content both weeds out and then preps the remaining viewers for a joke that suddenly lands when out of context it never would.

Like, a character who is established as psychic bothers to injure a famous football star to then clone his leg on top of his head so they can kick a snack machine to get candy. That’s a real joke in this show, and without the lead-up to it, it just sounds stupid.

But after it happened, I could not stop giggling. It was too strange, too obtuse, and too insane to not find amusing. That’s when the humor is at its peak. 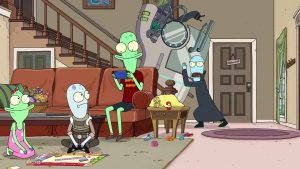 Solar Opposites Is Made With Tremendous Skill

And its storytelling is sometimes masterful, too. Both shows are best when it takes a messed-up science fiction concept and gives it way more thought (and implication) than most would. The B-Plot of Solar Opposites is a Fallout-like world inside linked terrariums full of people one alien shrunk for slighting him (and sometimes for no real reason.)

And that makes for fascinating visuals, creative sight gags, and engaging plot lines. The main plot also has a similar cleverness. You can tell the creators have a level of comfort with this show, and behind the gore and shock, they intensely understand good pacing and character-work.

Possibly even more so than Rick and Morty.

And its plot lets it go on forever, and it might just. The fandom is there; the appeal is proven. The animation style is now iconic. It’s never boring, occasionally uproariously funny, and just has its own style.

Solar Opposites is a show you might hate yourself for watching, but, if it resonates, you’ll watch it and laugh at it all the same. 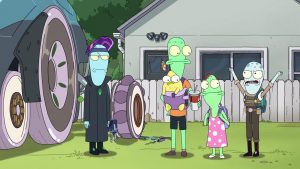