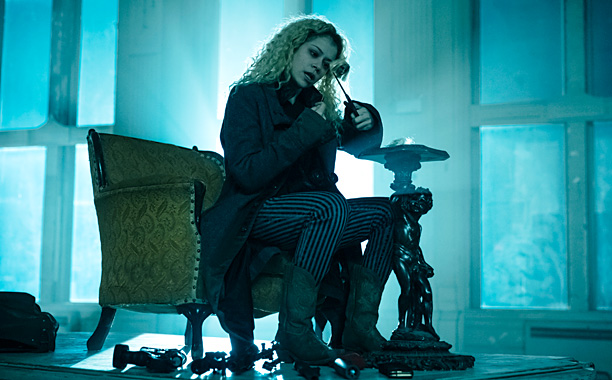 Today was the best day of my life. I am so happy with this episode. They didn’t throw me off a cliff, and when I cried, it was from tears of joy. Finally, we get an episode with LOTS of Helena (that’s why there are so many Helena pictures). But, before we get into her, let’s go to Rachel’s house!

Rachel Duncan took a bath in salt. She dressed in salt attire and retired to her kingdom of salt, metaphorically speaking of course. Well, it’s understandable. I wouldn’t be wearing my happy face either if I returned home to find my boy-toy dead and finger paintings with his blood all over my house (thank you, Helena. They’re beautiful, sweetie). An interesting tidbit that I learned is that Rachel knew that Daniel was her monitor. So, there goes my theory about Rachel believing she was self-aware, but really a pawn in Dr. Leekie’s schemes. I was clearly giving Grandpa Leekie too much credit. Rachel really is the H.B.I.C., and she promotes Sexy Paul as her monitor. It’s not as if he can say no, they still have those charges from his military days hanging over his head. Thus, a new slave head pops into the space left by Daniel. Honestly though, Sexy Paul, would it really be that bad to just go to jail for your crimes? I mean, at this point, it’s not worth it. You’re trapped regardless. At least if you went to jail, you’d still have your dignity.

Anyway, Dr. Leekie has been lying about the whole total transparency thing with Cosima. He’s been developing a new line of stem cells that could potentially save Cosima’s life. Rachel tells him to shut it down, but Papa Leekie wouldn’t dare deny Cos a potential cure. She’s the only clone that likes him. But who knows how long he can keep administering the treatment to her? 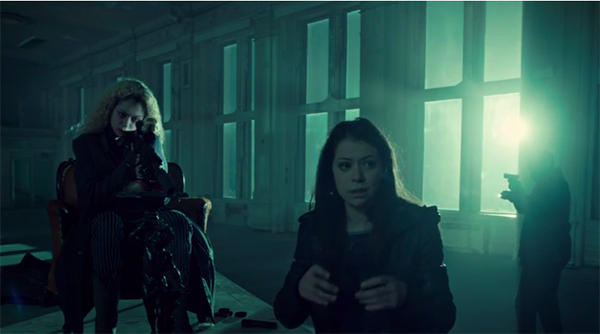 At Crazy Farm, the Prolethians have locked away Gracie. See, I learned her name! She’s the redhead that tried to kill Helena. They locked her in a concrete room until she admitted her wrongdoings and committed to helping them in their new version of Proletheism. She holds out for a long time, spending the majority of the episode in her cellar, even sewing her mouth shut in protest. It isn’t until after Ari, her father’s henchman, comforts her that she decides to give into her parents’ demands and gain her freedom. Gracie agrees to help catch Helena and bring her back to carry the newly forming embryo, or she’ll have to carry the child herself.

Black in clone territory, Sarah brings Helena to Felix’s. I mean, they all end up on his couch sooner of later. Fe isn’t exactly thrilled about meeting his new sister and vice versa. Everyone knows Helena dropped a few marbles somewhere, so how would you feel letting a killer crash at your place? Sarah makes it clear to Helena that Felix is family. He’s one of their “seestras” (I’m guessing that’s the way you conjugate Ukrainian), and she is to respect him. Sarah also crowns Helena with a new nickname, “Meathead,” effective immediately and used exclusively by Sarah and Fe. Helena isn’t a fan (I am, but we disagree on so many things. I tell her to keep a well balanced diet; she eats the fridge).

Under Sarah’s orders, Fe brings Helena to Art, hoping he can find out what the Prolethians did to Helena. Art is more than prepared for Helena’s trickery. He’s taken away all the sharp objects and potential weapons. He even bribes her with food. This is what he gets out of her:

What’s worse is that he also loses her. See, you can’t let your guard down with Helena, even if it’s just for a few minutes, silly Art. While Fe and Helena are away, Sarah skypes with Kira and Cal. Kira has started calling his “Daddy.” I swear, this is like Christmas for me. Sarah is her usual, cagey self with the details, but we know Cal is keeping Kira close by in the event that Sarah needs a quick getaway. Sarah clears out of the place, and Felix returns to clean up after his girls. His orders were to chaperone Helena, and maybe if he was there she wouldn’t have gotten away. However, Fe had to get ready for his hot date. Remember the guy from the morgue in season one? He’s back. The two get hot and heavy until the police burst through the doors, killing the mood. It’s all a show. Sexy Paul strolls in after them, and frames Felix with a gun. It was on the floor. In the words of Sarah, “You stupid twat.” WHO’S SIDE ARE YOU ON, PAUL? WHAT THE HELL? Damn, he’s fine though. Gah, so good-looking. I hate him now though, and I will cease referring to him as Sexy Paul until he gets back into my good graces.

Anyway, faced with an ultimatum that decides Fe’s freedom and hearing that Helena’s gone AWOL, Sarah finds Art handcuffed to the counter with a fortune teller riddle from Helena. Three places they’ve been, one they haven’t. Helena brings them to what looks like an abandoned warehouse to me (Art called it a “locker”) where she was kept by Maggie Chen. They find these pictures that suggest Rachel’s father, Ethan Duncan, is still alive. Helena calls him the Swan Man, an allusion to the mythological story Cosima told Sarah last episode about Zeus transforming into a swan in order to lay with Leda (I could never wrap my head around why she wanted to sleep with a swan). Slowly, these mysteries of Project LEDA are unfolding. Sarah and Art also find a headless doll with blonde hair cut off, telling them that Helena’s next target is Rachel. Wow, Helena’s been busy. The girl must be moving at the speed of light. I mean, she cut the doll’s hair. She drew pictures on paper, then folded the paper into a fortune teller. She stole a bike. She found an abandoned building across the street with a window peering directly into Rachel’s apartment. So busy. 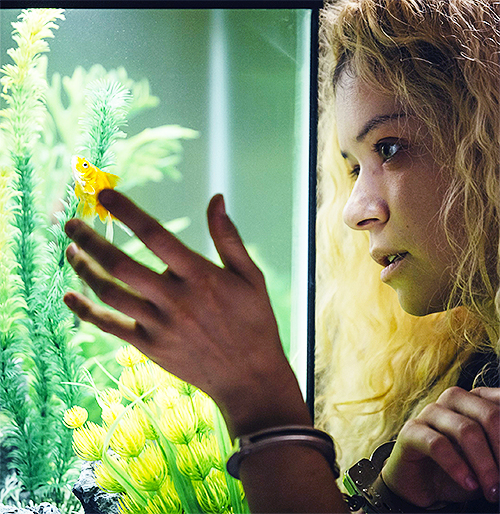 Art and Sarah find Helena with a gun (a very nice gun) pointed directly at Rachel. That’s not the good part. The good part is what Rachel is DOING and WHO she’s doing it with. In a weird, sadomasochist fashion, Rachel essentially has her way with Paul. Clearly, she is the H.B.I.C. in many ways, only this scene appears to be pretty annoying for them both. Even Rachel’s sex face looks pissed off, and Paul might as well be a cadaver. He’s basically Beyonce in an elevator (I joke, I joke). Ugh, I’m so disgusted. While I appreciate his nakedness, I wish it were under different circumstances.

Manson and Fawcett knew what they were doing when they chopped up the Paul/Rachel scene and merged it with the Sarah/ Helena scene because I probably would’ve fast forwarded if they weren’t together. Sarah convinced Helena not to kill Rachel and Paul. Wouldn’t life be so much easier if she had let her go through with it? I mean, can you imagine being in Helena’s world? Oh, he cheated on you, sis? Hold on, let me grab my sniper rifle. It’s in the trunk.

It’s always a pleasure seeing Helena and Sarah together because I spent so much time last season feeling really bad for Helena. All she wants is a family. Sarah even broke down, saying she thought she had lost her but couldn’t even tell people what she had lost. It was so touching. I hope Sarah’s being honest. She was really anti-Helena last season. I bet Art is wishing he had stayed home.

After Helena was talked out of her crazy, Sarah met up with Dr. Leekie. She had Cos give him the location earlier. In their meeting, he promises to keep giving Cos the medicine and pull his weight on Felix’s murder charges if Sarah finds Ethan Duncan. Sarah agrees, but tells him not to have them followed or she’ll sic Helena all over them. Too bad she didn’t see Paul lurking in the background. Rachel had him follow Leekie, thinking he’d make a deal with Sarah. Leekie tells Paul to report to him before Rachel because, if Sarah finds anything, it could be dangerous for everyone. Hm, that sounds good. Geez, who the hell is Paul even working for? Does he know?

By the way, Leekie said that all of the information about Project LEDA was destroyed. Did anyone hear an explosion off in the distance? That was the sound of someone ruining my expectations. So, you mean to tell me that the all of the data, including the original genome, is gone? So, the people that made the clones essentially know nothing about the clones? Fail, intergalactic fail.

Next week looks good! Rachel’s back, and it looks like Helena might have a boy-toy of her own(?)!