Guys…why did I decide to watch this movie? I mean, listen…it was on Hulu. You know, I was having one of those nights where I was just scrolling and scrolling. “Oooh, this looks interesting. Let’s click on it.” And what ensued was pure horror.

Not even the good kind of horror. This was bad. Just bad.

Clay Liford’s Earthling (2010) follows a group of people that bring the concept of aliens on Earth with a little different spin. Several people suddenly “wake up” and realize that they’re aliens. Complete with peeling skin and fainting spells, the protagonist, Judith, slowly unravels a hidden past that she never expected. Now, she has to choose between the life she’s always known and the mystery of one that she’s forgotten. 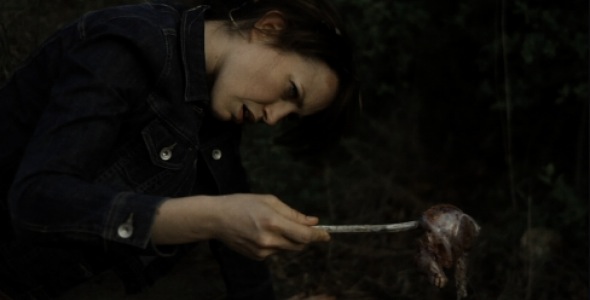 And that’s it. Some people die. There’s a pregnant child. There’s these knockoff slimy Slither (2006…a way better movie) aliens gushing around, and that’s it. While I didn’t completely fall asleep, I was pretty much bored out of my mind.

Is it possible to give something a rating of negative five stars? This film was like watching yourself die in slow motion.

Judith was as deadpan as a…well, a dead pan. It didn’t help that the angsty teen, played by Amelia Turner, gave too much angst and not enough depth. Even the “surprising” twist was lackluster. The film didn’t anchor me in with the suspense that it had hoped it achieved, rather drowning me in a sea of annoyance. Okay, I get it: humans are awesome and being an alien sucks. Does that mean that you have to suck so profusely for me to get the message? It seemed as though even the characters had no idea what they were talking about. Judith continued to be wrong about everything until the very end, and I completely missed/ didn’t care about anything that went on with Sean (Matt Socia), the astronaut.

Here’s a trailer though: