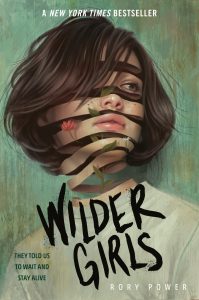 Wilder Girls is missing several things. The book has a lot of truly impressive aspects to it, and a heck of a hook—but doesn’t play with its toys nearly enough.

Its surrounding and superficial aspects are solid. The language: gorgeous and precise. The horror esthetic: earthy, blood-slick, and oppressive. But its narrative poignancy and impact are deprived for ambiguity’s sake.

This is so dramatic I would say every aspect of the plot could use more. More words, more scenes, more dialog. Increase its page count by maybe thirty percent, and I’d be happier. But much like the disease of the book, the problems are not easily removed from the host.

Let’s start with the characters. Wilder Girls uses the “multiple narrators” format, but the book proper doesn’t have perspectives from all its core three. We just jump between two. This choice, the frequency of shifts, and how one character’s internal monologue is handled feel experimental—and somewhat jarring. I can understand its inclusion, but it’s almost confusing in presentation.

The better result of this, though, is well-understood characters. Our main three have personalities that clash and intermingle. The deviations of who’s head were in deepens the narrative, not detracts. This is especially true because Rory Power has a real knack for using little to say a lot. Every additional detail we learn about a character, about their history, personality, and upbringing, adds more layers to interactions.

Except for the romance aspect. The book introduces a long-standing unaddressed crush between two main girls, hammers on it a lot, and then drops it almost entirely. I understand that life-or-death stakes leave little space for swooning, but it had so much weight. Wilder Girls is already about powerful feelings—both physical and emotional. It seemed tailored to explore budding romance. If the goal was to highlight that loss of potential as another tragedy, then it’s still not given enough sting.

But these complaints pale to the main divisiveness. If you like or hate this novel will probably come down to one aspect. In true cosmic horror fashion, Wilder Girls doesn’t satisfactorily clarify the threat. The Tox is a brilliant horror concept, no question. Its mutations and general effects remind me of Color Out of Space. But we ultimately don’t interact with it as much as you’d expect. It’s around, and a big part of the plot, but not explored with the expected bombast. Wilder Girls is arguably a survival horror book. Full of moments of low-to-the-ground tragedy, and moment-to-moment pain. Its characters make bad or ignorant choices, lack information, and barely understand what’s actively happening.

And this would be fine if the book didn’t seem eager to tell you secrets. If it didn’t keep sharply hinting at an upcoming plot twist. A newer dystopian novel—which Wilder Girls feels like the horror cousin of—would have these shocking moments before the climax. But it never comes. Gruesome truths are implied and left for the reader to piece together, but it lands with a duller impact.

This makes the ending awkward, begging for a sequel. The future is uncertain and character arcs remain hanging. All romance is relegated to subtext and implication. What becomes of all surviving characters is summarily uncertain. Even the strong body horror simmers down into ambiguity.

What it becomes in hindsight is not what it felt like at the offset. Wilder Girls is a gristly story of survival and personal stakes. It’s small-scale moments with a grand, unseen plot. We witness suffering in huge measure but never get closure on what it’ll mean. For those it works on—myself included—the book is disquieting and demands deep thought. For those that it doesn’t, it’ll feel frustrating and unfinished. Both are right. And both make the book hard to forget, and worth the time to see where any horror fan might land on that divide.