A couple is shown surviving a walker attack on their anniversary and discovering Hilltop the same day. Several of their anniversaries are shown leading to the day of the community fair as they and others head out to the Kingdom, but Alpha (played by Samantha Morton) murders the group on the road.

Ezekiel (played by Khary Payton) begins the fair, Carol (played by Melissa McBride) prepares to leave to search for Henry (Played by Matt Lintz) when he arrives with Daryl (played by Norman Reedus) and Michonne (played by Danai Gurira). Lydia (played by Cassady McClincy) causes Tara (played by Alanna Masterson) to worry the Whisperers will retaliate against Hilltop but everyone agrees Lydia should be granted asylum.

Ezekiel produces a treaty Michonne drew up long ago and each community leader signs all vowing to protect each other from the Whisperers. While everyone enjoys trading and game booths Michonne, Daryl and others prepare to go to Hilltop to defend against the Whisperers if they attack. Daryl leads the group but they keep it small so people in the fair won’t notice anything is wrong and continue to have fun. They come across the Highwaymen and they lead them to where the group from Hilltop were ambushed.

The couple was dead within the first three minutes of the episode did we need a montage of they’re anniversaries? They were a plot device and the montage scene and their deaths serve the same purpose without us sitting through all that useless backstory. Michonne and everyone are back together and happily enjoying each other and the fair, it’s nice to see them have this moment. We all know everything is going to come crashing down so they deserve at least five minutes of happiness. But once you get past the heartwarming family moments you remember it’s The Walking Dead so we have to figure out which character(s) are going to die. We checked in with pretty much any character who was given screen time this season, that never happens unless we’re about to lose at least one of them. 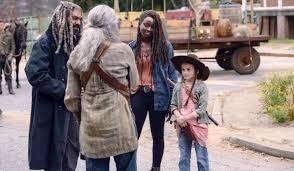 Reunited, and it feels so good.

Daryl, Michonne and Carol stay behind to follow tracks in case they’re alive and they’re joined by Yumiko (played by Eleanor Matsuura). That night they’re attacked by walkers including some of the newly turned from Hilltop, they fight off the walkers but are surrounded by Whisperers. Beta (played by Ryan Hurst) forces them to disarm and chastises Daryl for not giving up Lydia when he had the chance. In a flashback to when the group leaves the Kingdom, Alpha is shown walking through the fair using the clothes and scalped hair of the anniversary woman to blend in. Alpha is met by Ezekiel and passes herself off as someone from Alexandria. Lydia is told by some boys that Henry likes another girl and she runs off upset, Henry finds her and assures her it’s not true and promises to meet her at the movie premiering that night. As everyone settles in to watch a movie, once it starts Alpha takes the seat next to a startled Lydia.

Splitting up is the most cliché thing in this genre, and yet somehow they manage to do it over and over. It would have been more original if Daryl looked at the camera and told us they were going to be ambushed so stay tuned. But anyway now the Whisperers are taking their revenge against the communities (made slightly easier by the ‘lets split up gang’ mentality). Watching Alpha stroll through the fair was like that scene where Hannibal Lecter strolls through that marketplace stalking his next victim. Even though Lydia is new to living in civilization again you’d think she know what bullying is, especially given who her mother is. It’s funny to see adults so excited about watching a cartoon but Alpha is going to turn it into a horror movie, one I can’t wait to watch.

Alpha enters the clearing and claims Lydia is no longer her concern (Lydia refused to leave with Alpha), at dawn Alpha shows Daryl a large horde of walkers herded by Whisperers. She tells Daryl the next time anyone crosses her land the horde will cross theirs and says she’s marked the territory with a border. Alpha tells Daryl that she doesn’t believe he can protect Lydia but hopes she’s wrong. Alpha sheds a tear over losing Lydia and kills a Whisperer who witnesses it. They make their way back at dawn and find Siddiq (played by Avi Nash) tied up, he leads them to pikes with reanimated heads, among them Tara, Henry and Enid (played by Katelyn Nacon).

Siddiq tells the communities the next day that he was spared to deliver Alpha’s message, but instead he tells them that everyone fought and protected each other until the end, they died fighting as a family. Sometime later Daryl and Lydia visit the site to mourn their losses. 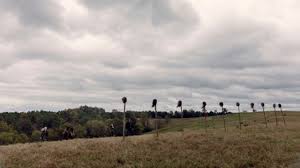 The line has been drawn.

Alpha loves Lydia but she clearly loves power more, Lydia defied her twice and made her look weak so Alpha made her mark to both the communities and her people. There were many background characters on the pikes we were probably meant to know or care about but only the three mentioned stood out, all main characters in different capacities. Tara has been a major character for years and is the biggest loss, Henry had his romance with Lydia, Enid however was always in the background and her loss isn’t much of one in terms of missing her character. Tara will be missed because she was around so long and Henry’s death will factor into Carol and Ezekiel’s stories moving forward. Watching their last moments as they went down fighting was an emotionally poignant scene. These deaths will both permanently reunite the communities and fuel their drive to take the Whisperers down next season.

“The crossing over the river may be gone but we rebuilt a bridge nonetheless.”

Carol is the most emotionally beat up character on the show, this is the fourth child she’s had to bury.

“I’ve seen how you live. I’ve walked your streets. It’s a joke. Your communities are a shrine to a long dead world.”

You can’t call Alpha weak. Crazy, cold and ruthless but not weak.