Alpha (played by Samantha Morton) has her Whisperers gather at the Hilltop claiming they come in peace and just want Lydia (played by Cassady McClinsy Lauren Ridloff). Daryl (played by Norman Reedus) tells her to leave and Alpha summons more Whisperers from the woods.

Daryl goes outside to speak with Alpha an threatens to kill them when Alpha reveals some of the Whisperers have babies and they’ve captured Alden (played by) and Luke (played by) and demands a trade for her daughter. The decision is made to make a trade but Tara (played by Alanna Masterson) finds Lydia’s cell empty; Henry (played by Matt Lintz) let her out to keep her being given to Alpha. Ezekiel (played by Khary Payton) and Carol (played by Melissa McBride) lead a hunting party for elk, Ezekiel convinces the group to make a pit stop by a theater to get a projector for the inter-community fair.

While Carol sees it as a risky waste of time Ezekiel wants thinks it’ll be worth it especially for the children who’ve never seen a movie. Alpha directs the Whisperers to distract the actual walkers that begin to appear. When the Whisperer with the baby can’t keep the child quiet and attracts the walkers, Alpha casually signals for the child to be left for the dead. Luke uses sign language to tell Connie (Played by) who was hiding in a cornfield to rescue the baby, she grabs the child and begins running from Whisperers and walkers. 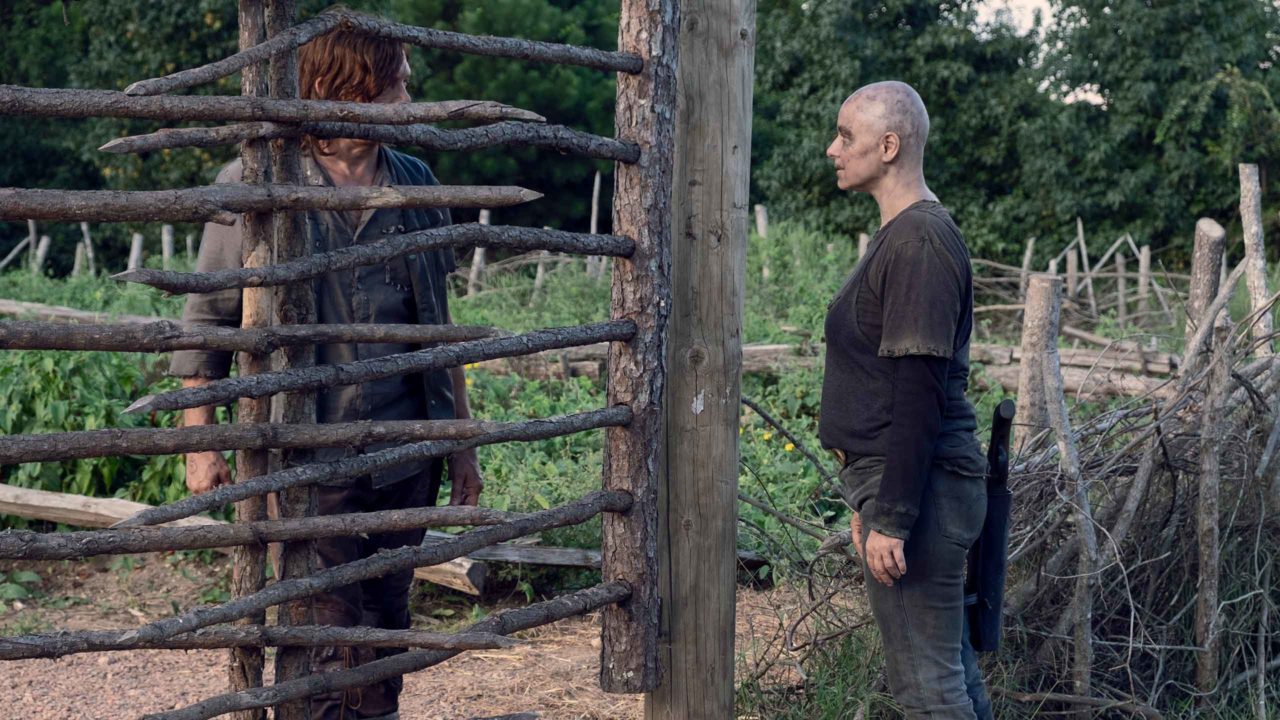 The first confrontation with the Whisperers was amazing; it was just a standoff between the two groups but the nuances from Alpha’s character made it great to watch. Alpha refers to her people as ‘animals’ and she’s very animalistic in her movements and the almost inhuman expression in her eyes. Even her pursuit of Lydia comes off more as someone wanting their property back than a mother wanting her daughter. The biggest shock was her casual indifference to letting her subordinate allow her baby to die because ‘natural selection’ only lets the strong live. Alpha clearly has no boundaries and that will make her a dynamic villain for this season.

Connie is cornered and nearly devoured but is saved by Daryl and others, who snuck out after realizing Henry left with Lydia. Meanwhile Carol floats the idea of asking Hilltop to take them in should things at the Kingdom get bad. Trapped walkers being to break out of the theater and they lose the bulb they managed to find. Ezekiel decides they should leave but Carol convinces them to kill the walkers and get what they came for. Henry and Lydia are hiding out in a house and Lydia wonders if it means Alpha cares but Henry says she doesn’t’.

Enid (played by Katelyn Nacon) finds them and begs Henry to give Lydia up so they can save Alden and Luke. Lydia comes out and decides to go back with her people because she misses them, but says she’ll miss Henry too. Daryl makes the trade an it goes smoothly but notes Alpha striking Lydia when she refers to her as mom instead of Alpha. 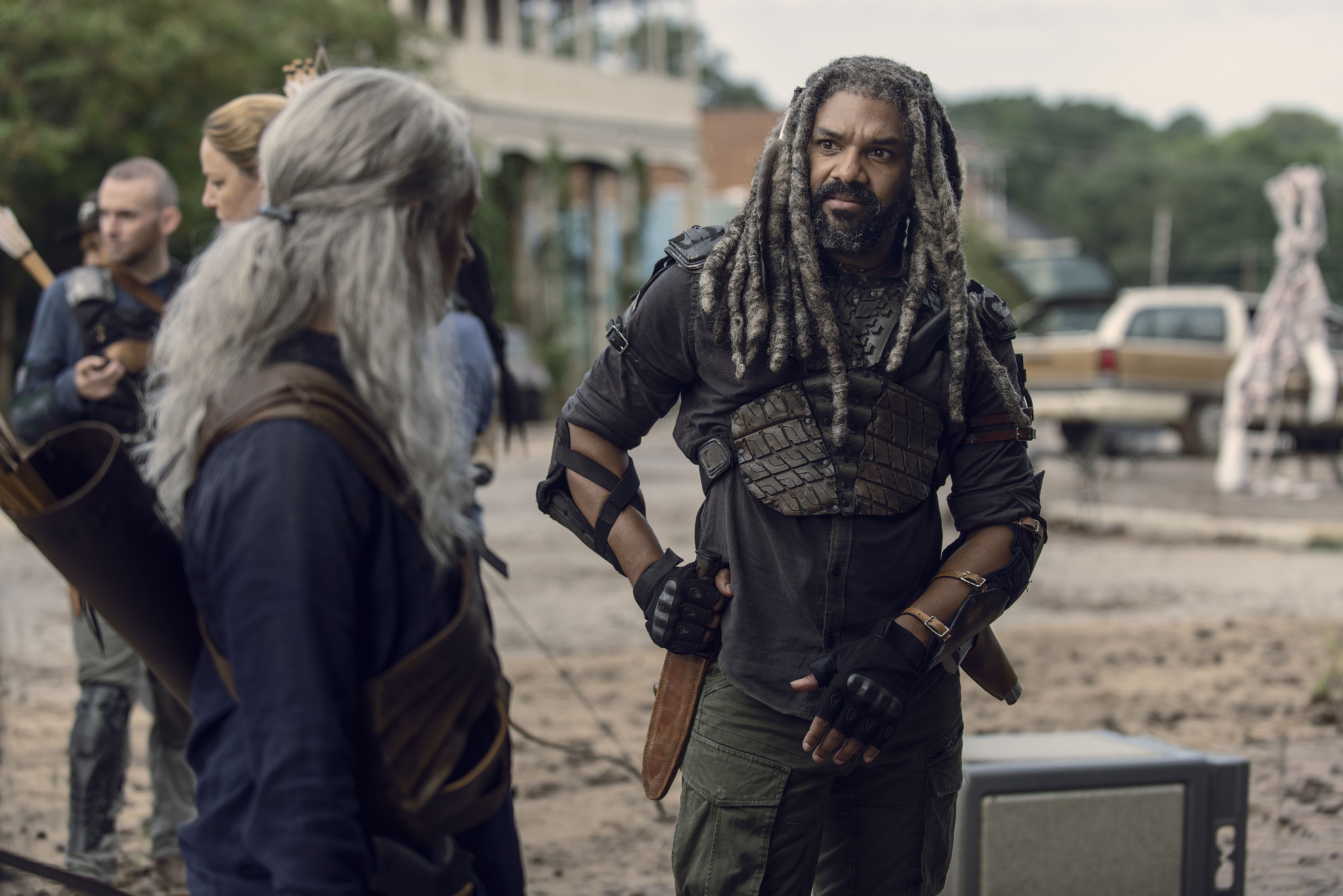 Trip to the movies.

Connie hasn’t really been given any focus but her daring rescue was visually spectacular especially when you consider she can’t hear. Having the sound muted helped underscore the danger of that and made the scene more thrilling to watch. Carol was willing to take on dozens of walkers for that bulb but she’s got her foot halfway out the Kingdom. If things are looking that bad movies really shouldn’t be their biggest priority. Henry clearly likes Lydia and Daryl is sympathetic due to his own abusive past but in the end they can’t sacrifice two of their people. Lydia has a Stockholm syndrome love for her mother; Alpha is clearly dangerous but she’s Lydia’s mother and in her mind Alpha’s actions signal love. But given that Alpha hits Lydia just for calling her mom that’s a toxic relationship Lydia needs to be freed from.

Henry asks Daryl how he can live with sending Lydia back to her abusive mother but Daryl says the world isn’t always right or fair. everyone in Hilltop and the Kingdom settle in happily for the night, the baby Connie saved adopted by a family in Hilltop. Henry leaves a note saying he’s going after Lydia and Daryl goes after him, despite his objections Connie goes with him.-

The pseudo happy ending is cut short with Henry taking off, but this should give us a more in-depth look at how the Whisperers live. Connie being so determined to go with Daryl came out of nowhere but after such a big episode I want to learn more about her.

“To live with the dead means to live in silence. If the mother can’t quiet the child, then the dead will. Natural selection.”

Alpha’s people must be careful not to even sprain an ankle given her zero tolerance for weakness.