In flashbacks, Wish Hook/Rogers (played by Colin O’Donoghue) comforts a young Alice/Tilly (played by Rose Reynolds) still trapped in her tower by Gothel/Eloise (played by Emma Booth) and vows to find a way to free her. In the present Rogers and Rumpelstiltskin/Gold/Weaver (played by Robert Carlyle) continue to investigate the deaths in Hyperion Heights.

Wish Hook goes to a captured Rumple for help in exchange for freeing him, Rumple says he needs Maui’s Fishhook that belongs to Captain Ahab (played by Chad Rook). Wish Hook tracks down Ahab but he refuses to give it away. They play a game of dice for it and Wish Hook wins, when Ahab accuses Wish Hook of going soft he claims the weapon is to kill Rumple. In the present, Lucy (played by Allison Fernandez) is desperate to keep Cinderella/Jacinda (played by Dania Ramirez) and Henry (played by Andrew J. West), knowing True Love’s kiss will kill Henry. Eloise comes to the police station to talk with Rogers about the murders but is only willing to offer information if he gives her one of his paintings. Drizella/Ivy (played by Adelaide Kane) struggles to deal with Lady Tremaine/Victoria’s (played by Gabrielle Anwar) death and Henry suggests she make up with her remaining family. Tilly tries to keep Rogers from showing Eloise the painting but he brushes her off. 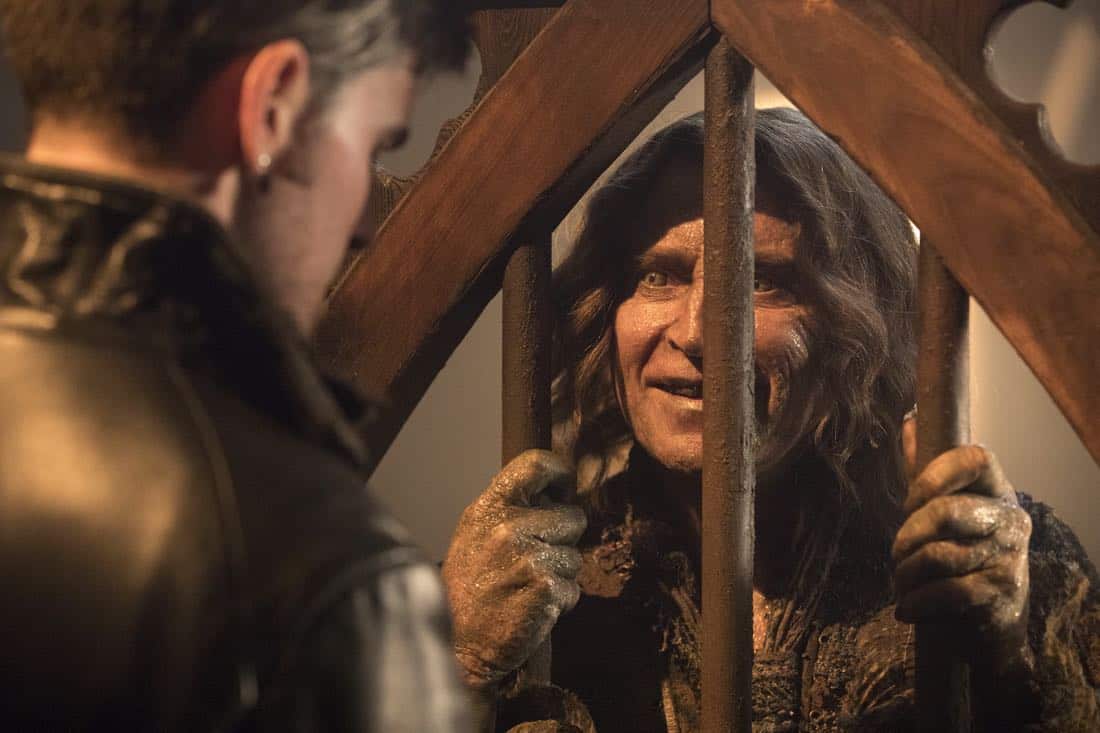 It’s hard to tell if that’s the Rumple from the original storyline because all the time traveling and different worlds have muddied things. Captain Ahab is the latest fictional character to cross into the Once universe but he didn’t make much of an entrance. He and Wish Hook had a ‘dramatic’ dice game over the Fishhook, I mean their pirates they should have at least had a sword fight. Lucy has been in the background for the last few episodes but her story here was actually very compelling, the emotional struggle of keeping her parents apart despite wanting her family together. Because Weaver and Eloise have their memories and Rogers does not it’s like watching two separate investigations. It’s more annoying than interesting because until Rogers remembers who he is everything is just going in circles.

Wish Hook goes back to Rumple but is confronted by Ahab and challenges Wish Hook to a public duel to prove who’s a better captain. The next day they meet and Wish Hook manages to shoot Ahab while only being nicked but feels guilty. Wish Hook goes to visit Alice but when they try to embrace but it causes him pain, he’s been cursed so they can never touch again. Gothel appears and reveals she poisoned the bullet in Ahab’s gun, hoping that Wish Hook’s pride would goad him into accepting the duel and she takes the Fishhook to ensure Alice remains trapped. In the present, Rogers continues trying to get answers from Eloise about the murders but she just keeps asking about the painting; a ship on the water. Eloise drops hints about Roger’s former life and tells him to follow his heart to find the killer. Weaver thinks they’re being distracted and they go to the hospital where the last victim is but find her dead and Eloise there with a bloody knife, she ignores their pleas and jumps out the window and escapes; they go to Tilly’s hideout and find the cult symbol but Rogers refuses to believe she’s the killer. 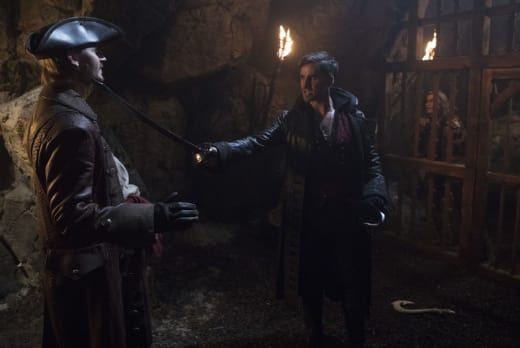 You’re not a real pirate!

The animosity between Wish Hook and Ahab was born out of Ahab feeling superior to him and wanting to prove it. It made no sense why Wish Hook would put aside saving his only daughter to save face with a guy he just met. If Wish Hook and Ahab had some kind of history and he forced Wish Hook into a fight that would at least make sense. Maybe the lesson was supposed to be now Wish Hook learned to be a better father but he already was until his meaningless need to save face. Meanwhile in the present Rogers and Eloise had a kind of Hannibal Lector and Clarice Starling vibe going on. Rogers could take a lesson from Clarice because he made it too easy for Eloise to have that woman killed. There’s no point wondering if Tilly killed her because it’s way too obvious and clearly something to make the investigation more intense. But with only a few episodes left these characters need to wake up soon, these cursed storylines are not interesting enough to carry the rest of the season.

Ivy visits Jacinda and they slowly begin to open up to each other; Jacinda gives Ivy a childhood doll and Ivy resolves to finish what Victoria started. Ivy goes to Henry for help finding Anastasia (played by Yael Yurman) but obviously doesn’t tell him the truth. Lucy goes to Regina (played by Lana Parrilla) for help and Regina lets Lucy know she’s awake and they work together to save Henry and Jacinda.

Ivy has turned over a new leaf, although her attitude definitely leaves a lot to be desired. Their mission to save Anastasia will probably take a while since like Rogers, Henry has no idea who he is. But Regina and Lucy seem poised to change all that and she even took Henry’s habit of making up operation names, that’s kind of adorable.

“Deep down, you might not realize it, but I think you could be the hero I need.”

They never explained why the Fishhook was magical, I guess after a while the writers figured why bother all we need to know is it has magic.

“You do realize I don’t serve shots of strawberry milkshake?”

I would go to a bar owned by Regina it looks fun.