Lucy (played by Allison Fernandez) tells Regina (played by Lana Parrilla) that True Love’s kiss didn’t break the curse. An ominous storm forms over Hyperion Heights and Gothel/Eloise (played by Emma Booth) reveals her plan to purge humanity but offers Regina and her family safety if Regina joins the coven but Regina turns her down flat.

In the past, Regina sees young Henry (played by Jared Gilmore) off to his senior year of high school and is disappointed he doesn’t want to attend college in Storybrooke, but seeing he wants to travel she gives him her blessing. In the present, Rumpelstiltskin/Gold/Weaver (played by Robert Carlyle) gives Regina magic to help restore adult Henry’s (played by Andrew J. West) memories in hopes that will make True Love’s kiss work. As the coven casts their curse Wish Hook/Rogers (played by Colin O’Donoghue) tries to free Alice/Tilly (played by Rose Reynolds) but their curse keeps them separated so he goes for help. He goes to Weaver who says that magic is real and offers to help him save Tilly and they bring in Robin/Margot (played by Tiera Skovbye) to help. Regina visits Henry and spikes his coffee with the magic but nothing happens and he she isn’t able to convince him of the truth. Cinderella/Jacinda (played by Dania Ramirez) and Tiana/Sabine (played by Mekia Cox) go to Dr. Facilier/Samdi (played by Daniel Francis) when Sabine can’t find Prince Naveen/Drew (played by Jeff Pierre). 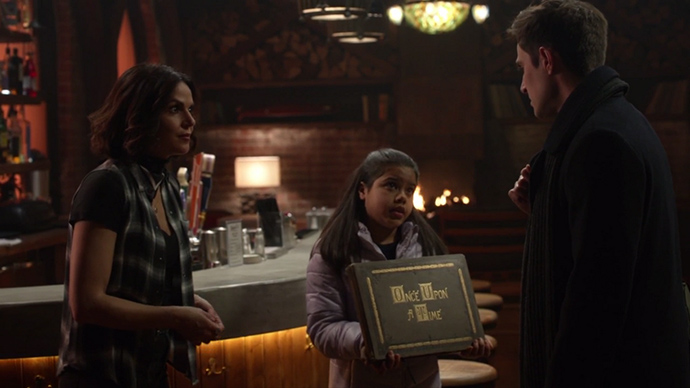 Henry needs a wake up call.

When I try to picture UC Storybrooke I can’t help but imagine it like a Hogwarts castle, if that were the case I wouldn’t want to go anywhere else for college. Now that Gothel has put her plan in motion it has brought some much needed forward momentum to the present storyline, and a thunderstorm is a pretty sneaky way of doing it. Weaver’s convenient potion didn’t work but that would have been so anticlimactic. It’s clear based on the way the episode is presented people are going to wake up, or at the very least start believing when they see magic like Rogers did. Waking up Henry has to be a grand and dramatic gesture after a season long journey of trying to do so. Side note it’s kind of ridiculous that after seeing all that Weaver still had to say magic existed and Rogers was still kind of doubtful. Jacinda and Sabine’s trip to Samdi’s seems like a pointless side story but it could help finally determine if he’s a flawed antihero or just a villain who played a long game.

In the past, Henry second guesses leaving Storybrooke since he can’t tell people outside of there about his adventures. In the present, Regina and Lucy find the storybook hoping it will give Henry his memories but again nothing happens, Lucy runs off and Regina tries desperately to prove it’s all real. Henry questions why nobody else from his books are there and Regina says that Gothel’s curse also brought them back in time; still not believing Henry leaves. Weaver, Rogers and Margot go back to Tilly but she not only rebuffs Margot but shrinks them all as the other witches disappear as the spell is nearly complete. Jacinda and Sabine find Drew tied up at Samdi’s and he uses a voodoo doll to lock them up too. Henry is unable to console a distraught Lucy and while looking at adoption files calls a number that connects him to his younger self and his memories return. Henry doesn’t tell his younger self who he is but tells him not to be afraid to leave home, and happily reunites with Lucy before going to help Regina who has gone to fight Gothel. Regina is easily overpowered by Gothel and when Henry kisses the unconscious Regina the curse breaks and frees Tilly. 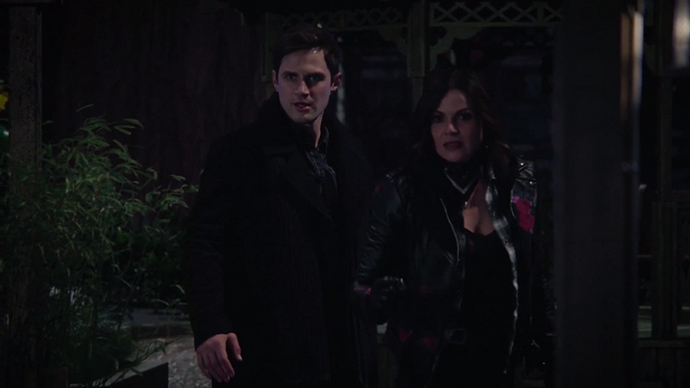 It must suck to have so many fun adventures but never be able to tell anyone without being considered crazy. Samdi officially seems to be on the villain side of things, I wish we could have seen whether Jacinda and Sabine figured out he used magic or came up with a ‘rational’ explanation. Tilly had to be under mind control because why else would someone voluntarily turn themselves into a small plant? The reveal that everyone was taken back in time was glossed over pretty quickly; there were never any hints about it before despite Regina stating it very matter of fact. What time period are they in and why did Gothel take them back in time; these are questions we’ll never know the answers to which is frustrating. However Henry calling his younger self from the flashbacks was a great reveal and that plot device linked past and present in a fresh way. It may have taken longer than necessary to break the curse which wasn’t great for the flow of the story but the way they broke it makes up for that (a little).

Regina still isn’t able to bring down Gothel but Weaver arrives with Tilly, although scared Rogers and Margot rally around Tilly to give her courage. Tilly admonishes Gothel for choosing hate over love and uses her magic to turn Gothel into a tree. Jacinda and Sabine escape but Samdi slips away, Jacinda runs off to find Henry and Lucy. Amidst the happy reunions Weaver discovers his mementoes of Belle (played by Emile de Ravin) missing. He confronts Samdi but is unable to kill him; instead the Rumple from the wish realm kills Samdi with the Dark One Dagger and says he and Weaver need to get ‘better acquainted’.

Gothel was brought down pretty quickly which was kind of a letdown for someone who was the main antagonist most of the season. For a moment it seemed Samdi would take on that role but then we lost him as well. It’s a shame we won’t get any closure on the Regina/Samdi relationship; I think if the show had gotten another season we would have. However that death was softened by the reveal of a second Rumple who’s ready to cause some trouble. In a way it’s fitting that the Dark One himself would be the main villain in the series finale. The original curse (and the story of the series) started with him so it’s kind of like starting the final chapter of the book.

“You want to ruin me the way the world ruined you. You chose hate, but I choose love.”

It would be so cool to call my younger self and give him some advice, or even just to say hi.

“Home isn’t a place. It’s the people in it, and they’ll always be with you.”

It’s the first half of the finale next week, let’s see if these people finally get their happy endings.