Rumpelstiltskin/ Gold/Weaver (played by Robert Carlyle) mourns Belle (played by Emilie de Ravin) when he’s visited by Dr. Facilier/Samdi (played by Daniel Francis). Facilier tries to steal Rumple’s powers but fails, when Rumple attacks Facilier claims he can hear Belle who says he must find the Guardian soon because there’s still darkness inside him.

Rumple finds Alice/Tilly (played by Rose Reynolds) to test if she’s the Guardian but is stopped by Wish Hook/Rogers (played by Colin O’Donoghue). But when Rumple notices his skin starting to get covered in scales he worries the Dark One magic is taking over. Rumple visits her that night and offers to cure the curse between her and Wish Hook in exchange for her help. In the present, Hansel/Jack/Nick (played by Nathan Parsons) is found dead Weaver realizes Samdi was behind it and has stolen the Dark One Dagger. He goes to Regina (played by Lana Parrilla) but she doesn’t believe could have done it and refuses to give Weaver the potion to heal Henry (played by Andrew J. West) so he can use it’s magic. Regina asks Samdi if he stole the Dagger and he says no, once she leaves Weave confronts Samdi at gunpoint but Samdi denies having the Dagger and forces Weaver to leave with magic. Rogers investigates his death and is joined by Henry who is still haunted by some of the things Nick said to him. 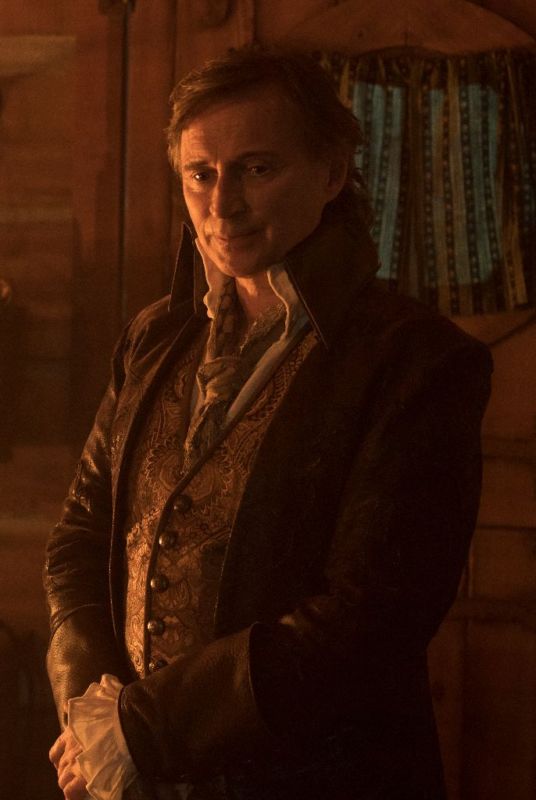 Trying to be a better man (again).

Rumple/Weaver is really hobbled by this rule of being good to be reunited with Belle; there has to be exceptions or loopholes that don’t require him to be so neutered. Alice being the Guardian works well into the story given that her mother is a witch and she’s an established character. Samdi on the other hand is clearly set up as a villain but then he has a clear bond with Regina that tries to give him more depth. The setup is will Samdi choose his relationship with Regina or power but this is a running storyline we’ve had with Belle and Gold and Samdi isn’t a character I’m as invested in as Gold. Since their past hasn’t been explored it doesn’t we can’t get invested in a Samdi redemption plot or a happy reunion with Regina. Rogers and Henry’s investigation is (hopefully) going to be the catalyst that brings their memories back or at the very least puts them on that path because realistically there’s no way to explain away how Nick died.

Alice and Rumple confront Samdi and Alice takes Samdi’s heart, Rumple says to break the curse she must crush his heart, Alice refuses and Rumple takes that as proof she’s the Guardian. Alice uses her powers to take the Dagger and the darkness is sucked out of Rumple but before she can fully destroy it Rumple stops her. Rumple couldn’t bear to put the burden of immortality on Alice and decides to find another way to free himself. In the present, Rogers and Henry search Nick’s apartment and they find Prince Naveen/Drew (played by Jeff Pierre) inside, he runs but is caught by Rogers. Drew tells him Samdi killed Nick and was looking for protection but refrains from saying the whole truth as Rogers is still cursed. Tilly goes on a date with Robin/Margot (played by Tiera Skovbye) but a loud buzzing inside her head forces her to cut it short. Weaver sneaks into Regina’s bar and steals her potion to create a locater spell to find his Dagger. Weaver finds Tilly and realizes the buzzing is the Dagger and finds it inside her backpack, she doesn’t know how it got there but once he takes it the buzzing stops. 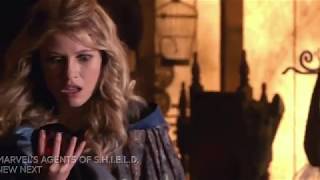 Alice passed the test and in the process gave us a heart snatching, been a while since we’ve seen that. When Rumple stopped Alice I fully expected it was because once again he couldn’t bear to give up his power. Instead Rumple finally did something selfless (although who really thinks of immortality as a burden?) So far Drew has been one of the more useless characters to the story but he finally did something useful. Well assuming his conversation leads Rogers to the truth about everything otherwise he remains an unimportant side character. I’m confused by stealing Regina’s magic doesn’t Weaver endanger his afterlife with Belle? The way people made it sound if he was anything less than a saint he would never see her again. After all that the Dagger was safe with the Guardian the whole time, now Tilly shoudlnt hear any ringing unless she has a night of hard partying. Samdi wasn’t behind it this time but it doesn’t mean he’s good, he probably just didn’t get the chance to steal it.

Wish Hook talks with Rumple (now fully reverted to his old appearance and mannerisms) and thanks him for what he did for Alice. In the present, Regina confronts Weaver about stealing her magic to save Henry and is furious that he jeopardized Henry’s life for nothing and declares herself done with him. Rogers reads a medical report that says Nick was stabbed from the inside which leaves him confused. Henry goes to Cinderella/Jacinda (played by Dania Ramirez) and shows her the reports that says he is Lucy’s (played by Allison Fernandez) real father and he wonders what else she was right about.

Ironic that Rumple ended up doing the right thing while Weaver decided to be selfish. Hopefully Regina doesn’t stay mad too long because she and Weaver have been one of the most dynamic pairs in the series. If Rogers somehow finds a way to rationalize being stabbed from the inside than the writers are just straining to find ways to keep his character in the dark. For some reason Henry now believes the medical report but it at least got the ball rolling for him to believe Lucy.

“Let it all out. After all, there’s no greater pain than being separated from true love.”

If immortality is such a curse I wonder who Rumple will decide is unlucky enough to take his Dagger so he can move on with Belle.

“You honestly think a pincushion is going to work on me?”

With the potion gone Henry and Jacinda will have to hold off on that kiss.