Undone pulls off the truly difficult task of making a story about being unmoored in time comprehensive and uses it to deliver storytelling and mystery in a way that’s deeply satisfying for a person willing to binge it.

But, sadly, for those who first watch it, that’s not the thing they are going to be paying attention to for most of their viewing. They are going to be looking, wondering, utterly mystified by the animation style. Because this cartoon has more than voice actors, it has humans put into the animation—which is both the best and worst television decision I’ve seen in a while. 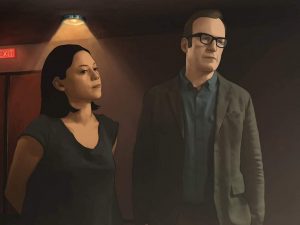 I use the word mystifying, specifically, because it’s attention-grabbing and boggles the mind when you have long shots looking right at human faces or bodies. If nothing else, it makes the show distinct—but also sometimes vastly ugly. Full-on, uncanny, disturbing, hard-to-look-at ugly. There’s one shot that comes to mind where it looks like they rendered a man out of putty and then covered him in plastic wrap.

But then, in moments where time is being fluctuated, where reality is shifting and bending in on itself, the reason its animation seems a lot clearer. I cannot imagine how hard it would be to render certain scenes in CGI without it looking goofy. 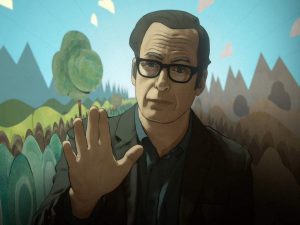 Undone Feels Like Going Down A New Rabbit Hole

And by the time the show goes deep into its time-traveling shenanigans, the true craftsmanship comes across. They manage a parallel universe time loop, order of event shifting, prescience bootstrap paradox triple-somersault of a time-travel moment that makes things like Doctor Who and Groundhog Day seem limited, and yet it’s presented in a way—and quickly enough within one episode—so that you don’t forget organic order of events, you don’t get lost.

It turns out the best way to do a story that takes an idea I first saw in Arrival and present it with the surreal nature of Alice or Wizard of Oz and the dense plotting of Primer is to set it around an emotionally understandable tale. To keep the scope small.

Any other show likely would have butchered that.

Instead, we got Undone. A rare treat. A wild ride. And, if the first three episodes are anything to go off of, a ride infinitely worth taking.