Let’s get ready for tonight with a look back at last week’s episode!

What is it about dolls and the creepy feelings they invoke? Is it their eternally frozen facial expressions or their soulless eyes? I had a doll that squinted when you squeezed it as a child—it really just looked like it was constipated, but I digress. I’m going with the eyes. Yeah, those are creepy.

Jill stole the creepy Jesus baby from the Nativity display and Kevin doesn’t really seem to give two sh*ts about it. I don’t understand Jill’s mood swings, and I’m beginning to think that her friend, Aimee, isn’t actually the bad influence after all.

Well, I was right! Christine’s pregnant, and if all of this did happen because of God, Christine must be carrying the Antichrist or something. Or Holy Wayne is the Antichrist and now she’s carrying “Rosemary’s baby” (which I guess would technically make her child still the Antichrist, but again I digress). Either way, this baby is not a good thing.

I’m wondering what’s going on with the bullseyes. I didn’t notice it at first, but Tom and Christine’s are opposite in color pattern. Is that significant? I get that it’s so the maker can find you or whatever, but I would think that the color pattern would all be the same.

Laurie has finally served up some divorce papers to Kevin and he is seriously not happy. The Mayor was right, this guy just needs a win.

I think that the lighter Jill gave to Laurie is extremely significant. The fact that she went back and retrieved it (?) only shows that she is not fully ready to let go of everything. I still don’t know what the GR’s full purpose is, but I don’t think that Laurie is as committed as we thought.

Pulling the ol’ bait and switch, while everyone was at the fundraiser ready to arrest the GR protesters, the rest were out burgling homes. Photographs, they took every single person’s photographs.

I wonder if the fact that the protesters were five yards away from school property will come back to bite Kevin in the ass. This guy really does need a win, yeah.

One of the best parts of this episode is when Kevin discovers Matt bringing a baby doll to the display, and then Kevin just throws the original out of his truck. He really didn’t give a damn about it, did he? 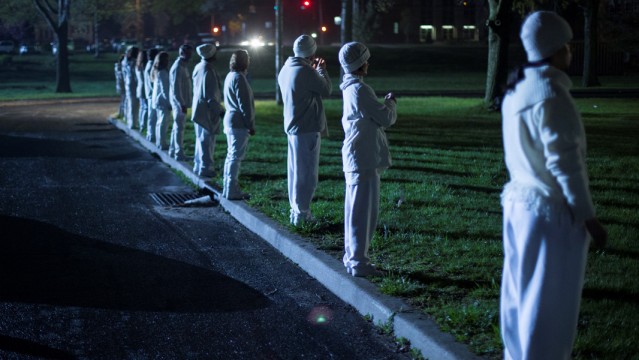