Raya and The Last Dragon Seems Quite Curious

I’m late to the party for the Raya and the Last Dragon trailer. The newest Disney Princess movie is coming out in only a few days. But, even this late, I have things to say, opinions to give. Sure, it’s good animation, voice work, and such, but let’s get into the other interesting stuff.

The starting one being this is the first of the Princess movies in a long time to be a pure fantasy story. Sure, Frozen and Moana both have magic and non-human intelligent beings, but they still took place in locations on Earth. This time, we’ve got the fictional land of Kumandra, where dragons exist, alongside what looks like magic stones, and four warring factions.

And that’s cool and all, but it makes one aspect of the trailer stand out like a sore thumb: the dialogue. Especially the dragon, but it’s not unique to the creature. A lot of the trailer sounds great, full of dramatic one-liners and philosophical fantasy nation stuff, but we also get “Really? A con-baby?” and the lines about group projects. 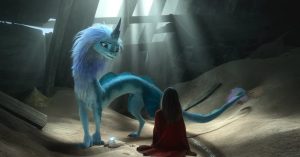 Like, I cannot express how jarring it is to see this creature move around with such attention to body shape and claws and then have them talk like an old drunk mom out of a cringey sitcom. I know we all loved Genie and Mushu, but it’s not a trick that will always work.

This is admittedly a weird thing to harp on, but noticing that issue just made more and more of the ill-suiting comedy aspects obvious and annoying. The baby, the shape-change thing, just ruins the flow. This is like two different movie’s trailers mashed into one. The middle parts with apocalyptic deserts, intense sword/fistfights (when have you ever seen a Disney Princess have battle rage before?!), and almost thriller-like pacing are so strong. This is maybe the first time I’ve seen powerful action scenes from Disney since The Incredibles (2)—and I’m all for it. 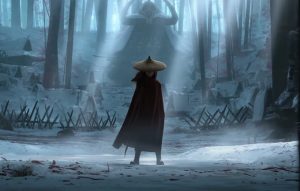 Raya and The Last Dragon Will Look Awesome

But I can’t tell who this movie is meant to please. It’s Disney, so it’s obviously for families and all ages, but the tone is so wild it might please no one but amuse most.

Now, there’s no doubt I’ll watch it—if only to see what the heck this movie’s plot really is and to witness masterfully animated sword fights—but I’m dreading a sucker punch. I’m dreading a misfire. I really hope the trailer is just oddly cut. Possibly, they put all the kiddy stuff where they did to assure parent’s the film is appropriate. Maybe that’s all it is. Maybe Raya can still be a stellar new fantasy creation. 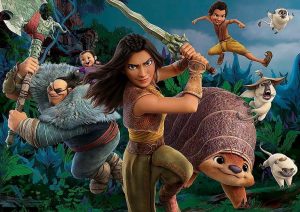