Coming off of their pop culture-filled run of Young Avengers—a comic almost annoyingly hyperaware of its societal relevancy and rather fond of fourth-wall smashing—Kieron Gillen and Jamie McKelvie have begun a series that’s just as flashy but hopefully less stuck playing its youth card all the time. After months of hype and one positive preview after another, I have been looking forward to getting my hands on Gillen, McKelvie, Matthew Wilson, and Clayton Cowles’ The Wicked + The Divine to try a taste for myself. This first issue both met my expectations and flouted them.

Gillen and McKelvie first truly revealed their dynamic duo powers to the world with their semi-nostalgic urban fantasy series, Phonogram, in which music is actually magic. Gillen’s writing is always based on very human feelings and often self-reflective: he has no qualms about using his stories to explore questions in his own life or those of others close to him. Phonogram was both a self-reflective and niche story, with allusions to musical eras and bands flying fast in its cynical monologue, and yet its emotional honesty gave even the most musically-ignorant reader something to latch onto. It was also just a fantastic concept, and fortunately one that McKelvie had the skills to represent visually.

The Wicked + The Divine has left the detailed name-dropping and outright cynicism behind, but it expands on the theme of musicians as the living icons of an era by conflating deities with pop stars. The conceit is that every ninety years, twelve gods reincarnate by taking the form of beautiful young people. They have crazy powers, loads of charisma, and all the trappings that come with being worshiped. However, they only have two years to burn as brightly as they can and then they’re gone, dead, maybe forgotten. The goddesses and gods (though only goddesses have been introduced so far) range from Lucifer to Amaterasu, incorporating archetypes and mythological tidbits from many cultures. It’s a daring sort of story in that it banks on pulling myth into our celebrity-obsessed society without the figures totally losing their value. The touchstones of the pop star life make the idea of goddesses on Earth more understandable perhaps, but one wonders if it runs the risk of cheapening the concept as well. 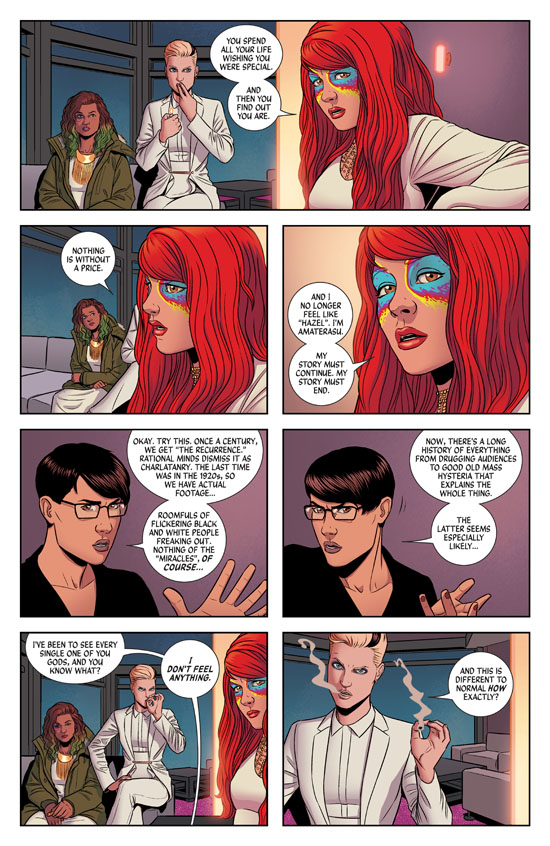 Laura and Luci(fer) listen as Amaterasu tries to explain the undefinable. Art by Jamie McKelvie. Colors by Matthew Wilson.

And yet… Look, this is Gillen and McKelvie and they should know what they’re doing. And it seems like what they’re trying to do is capture an emotion as much as tell a cool story. By giving the narrating role to a regular human, Laura, they seem set on exploring what it’s like to both want and maybe experience a moment in which we feel like we are close to being someone more than human. They’re trying to tap into that rush we get when maybe, just for a little while, we’re the most respected in the room, the most stunning at the party, the best on the sports field, the wittiest at the table. It’s that moment when all eyes are on us and we feel as if we can do no wrong, that moment when we’re beautifully invincible.

Trying to capture something as ungraspable and euphoric as that in a 2D medium seems like an impossible goal, but it explains why so much of Wicked + Divine is centered on its look, its brand, its hype. In this case, the style may be a very key element of the substance. Just as a pop star’s personal style is intrinsically part of who he or she is perceived to be, the style of Wicked + Divine must act as another layer of characterization for, if you will, the story’s own persona.

It’s still only one element though. It’s clear that this series is meant to be one heck of a party but as Gillen says in his afterword to Issue #1, it’s “the ultimate party at the end of the world.” It’s this “end of the world” bit that keeps the series anchored. I didn’t expect (at least not this quickly) that these goddesses would reveal curious vulnerabilities. Even more than the death sentence hanging over their heads, I found their current troubles engrossing.

Issue #1’s cliffhanger ending highlights the fact (even more than the doubting reporter character) that these goddesses do not have everything under control. Their reliance on the structure of the world, even as they begin to push its boundaries, is probably what makes them the most intriguing. They’re right on the cusp of a great many things—adulthood, stardom, godhood—and it looks like everyone experiences growing pains. That previously mentioned feeling of supernatural invincibility is nearly always linked to youth. Supernatural powers or not, the youth of these goddesses comes with its own larger-than-life brand of folly. Even with only two years to reign (or rage, or whatever), these twelve deities may have some serious conflict to deal with among themselves as well as with the rest of the world. If it isn’t easy being a queen or king, it must be far more difficult being a pop star deity.

The Wicked + The Divine #1 is out now from Image Comics. You can hopefully find it at your local comic book store, or online via Image Comics or Comixology.