So, this is not a Christmas movie. But it represents family dynamics super well and has many of the same themes you would expect in a Christmas movie. It’s also fantastic, and I want more people to see it. So, with all that in mind, here’s an older review. 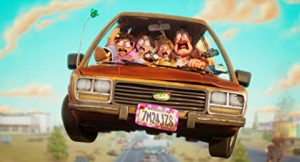 The Mitchells vs the Machines Is So Impressive

Let me just get out of the way that Connected was a wonderful title for a movie that blends family drama and a nuanced take on technology in human society. The Mitchells vs the Machines is just not as good a title. It’s not nearly as punchy.

And if that minor nitpick is one of my only major complaints about this movie, then that should already be an emphatic seal of quality.

The Movie Doesn’t Just Go Down One Plot Road

First off, the biggest thing about this movie is that it’s secretly three movies blended into a somehow coherent work. That isn’t obvious at first blush, and I wouldn’t blame a viewer for feeling whiplash as the plot moves throughout its various aspects. I’ll cover each section in turn.

The first section is the most important: a classic family drama story. The plot of a young artist who doesn’t get along with their more down-to-earth and practical father is well-worn but done here with an absurd amount of heart. Our main character, Katie Mitchell (voiced perfectly by Abbi Jacobson), has an extended flashback montage that will make almost anyone empathize with her. She’s delightful and engaging and sarcastic but most of all genuine. 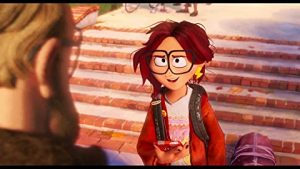 A Loveable Core Cast Holds Everything Together

But she’s only one-fourth of a great main cast. If the family members were not rendered with grace and verisimilitude, then this plot would fall apart in minutes. Thankfully, it doesn’t miss a step. Rick, the father, through frequent scenes of bonding with his daughter, and interacting with his wife, becomes what might have been a stereotypical caricature into a complicated man. You do get a sense of him trying to be the best father he can be—and see how he is succeeding in surprising ways. It’s the interactions between him and Katie that will drive watchers to tears and feelings of intense nostalgia.

The other two, the son and the mother, are less notable. This is primarily from a lack of time spent with them. Linda, the mom, is mostly in the background, but her mini-plot arc of dealing with the effects of social media, perceptions of normalcy, and the merits of genuineness are as poignant and smart as it’s understated. Aaron, the son, is just a quirky, entertaining character who’s got heart in spades and produces several laugh-out-loud moments. It’s not his story, but it’s good he’s here to round out the cast. 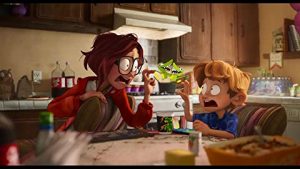 The Mitchells vs the Machines Gets Family Bonds

This interconnectivity, this familiar exploration, would have been enough to carry a movie. But The Mitchells vs the Machines still has two more things to cover. The remaining plot threads are much more interconnected. There’s the pure satire plot and the robot apocalypse.

And it’s here we meet one of my criticisms. I’ve mentioned it before. The full three plotlines do interlock and complement each other, but the latter two come out of nowhere. As an example, early in the movie, the mom, sister, and brother all have a normal scene together and then the dad arrives. Then computer screens come out like they were waiting for a cue. It’s a sloppy moment. Nowhere has it even been hinted before this that they escape into individual screens. Interactions involved screens, sure, but it was communal and organic to the plot. I’m not saying this isn’t a realistic moment, I’m saying it’s not been adequately established. 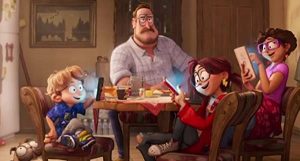 The Technology/Satire Plotline Comes In Abruptly

But if the introduction was sloppy, the follow-through is masterful. There are so many moments where the complications and nuances of technology and how they affect people are shown with thoughtful consideration. Instead of a blanket condemnation like a lesser film might, it talks about how technology allows artists, like Katie, to make things they never could. It mentions how technology makes for connections between people that have never been in the same physical space. How it is only bad when used poorly by people—when used to harm. Frankly, I didn’t expect a movie that makes one of the most biting and hyperbolic commentaries on how badly people crave Wi-Fi could still have moments of real consideration and play the satire fairly. 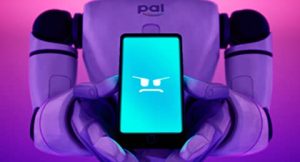 The Mitchells vs the Machines Manages Nuance

And then, finally, we get to the apocalypse. It’s rendered with extreme darkness if you consider it fully. The movie multiple times has to put in tiny jokes to even attempt to undercut how brutally efficient this robot takeover is. The villain here is utterly perfect and funny (and animated with way more effort than needed for a simple face on a screen) and yet further layers the satire. It, again, does come somewhat out of nowhere, as it does not have much to do with the emotional core of the movie. It does, however, make for a lot of action-packed and glorious moments of explosions and fast car chases. I won’t dare spoil it, but the scene in the mall alone makes the entire section worth the effort. Ultimately though, its function is mostly just a catalyst for the better parts of the film. The family drama is allowed to expand bigger because of the danger pushing it forward. 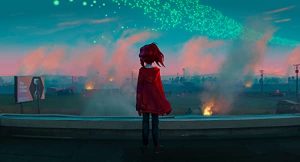 The Robot Plot Spurs On The Emotional Moments

It does do one other thing, though. A lot of this movie could have been live-action—but thank god it wasn’t. The animation is on a whole other level. This movie is a soul-lifting visual treat. The human animation—though a little hard to get used to—makes for expressive moments of physical acting that’s charming and impressive. But it’s the background animation where The Mitchells vs the Machines gets into majesty. The scenes (and I do mean every scene) have so much thought put into the background details. You could feasibly watch this movie repeatedly and not see all the tiny details of rooms, of the street signs, of the little extra flares that go into Katie’s animated sketches and videos. The visual team put passion, pure artistic joy, into this movie, and it lends such a sense of reality and breadth of Americana it sweeps the viewer into the narrative.

The Mitchells vs the Machines may have seemed like just a movie wanting to make fun of technology, but it’s so much more. This is a movie made by masters, who understand both deep storytelling and chaotic fun and brings both in equal measure. It’s a ludicrously beautiful, witty, and uplifting movie about the connection, the sacrifices, and the love that can exist in a family. 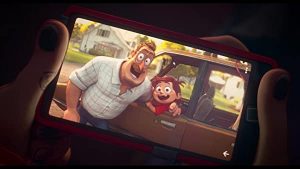