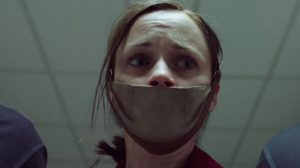 The Handmaid’s Tale Shatters You, Sorry

I’m not sure I can recommend The Handmaid’s Tale. It’s amazing, fantastic, brilliantly acted, scripted, and is one of the best shows I have seen in maybe decades. Gut churning and yet riveting, this show is—no hyperbole—a masterpiece of tension.

However, it’s also nearly impossible to sit through an episode. I very nearly fled the room at one point to get away from the screen. It was an act of will to get myself through the three episodes I usually dedicate to a show. 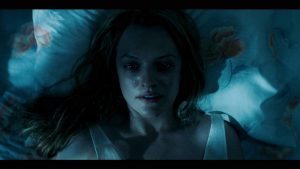 The Handmaid’s Tale Is Actually The Darkest Show

And that’s a hard pill to swallow. Because I don’t think I can go back as much as this is one of the best-acted things on television. There’s a scene where the camera remains fixed the entire time on one spot, never moves, and there is barely any action besides dialogue—but it’s so well-crafted, so many layers of subtlety in every action and moment, so much implication, that it’s mesmerizing.

I have never seen a character communicate entire thoughts non-verbally, repeatedly throughout the show, and with such nuance.

But I’ve also never seen a show make a dystopia feel this real. You usually don’t get to see the fall of society, to get a good idea—a real and tangible sense—of how a dystopia formed. The Handmaid’s Tale shows it from a ground level, at the injustice of it all even before the truly horrific starts happening, and those are perhaps the best parts of the entire show.

But maybe that’s because the other scenes are so layered in inhuman acts and monstrous violations of free-will, autonomy, and even basic decency, that watching people gunned down in the streets in an episode is not even the most horrific thing presented. 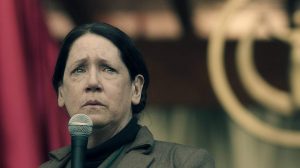 The Handmaid’s Tale Kicks You While You’re Down

That may be my only critique of the show, and it’s not even a real criticism: it’s too intense, too mind-breaking. They somehow never make it exhausting, but that only makes it worse. Each blow of darkness successfully hits right in the stomach and it’s relentless. Any other, weaker show would eventually make it comical just how horrific it all is, but The Handmaid’s Tale manages to never leave the realm of reality. While it may seem absurd at first, as you watch events unfold, it becomes eerier and eerier how realistically the dystopia forms. Sure, the result is something so hellish that you could only imagine it as a horror movie concept, but each twist of the knife inside the gut of freedom and morality and treating people as human beings and not cattle feels natural in its progression. There are politically charged shows that preach, and then there’s The Handmaid’s Tale. In only a few scenes, it might just sway a mind politically by presentation alone.

Other critics have pointed out that this show is important, and it is. It’s successfully fulfilling the function of dystopian media: to show us a dark version of some aspect of ourselves and our society and dare us to even try and not see that eventuality should we not be careful.

I wish I could say every person should see The Handmaid’s Tale, once they are old enough to handle it, but I don’t want to cause nightmares and genuine anxiety.

I leave it to you to decide if you can withstand The Handmaid’s Tale. And don’t take that decision lightly. 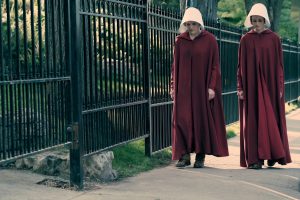