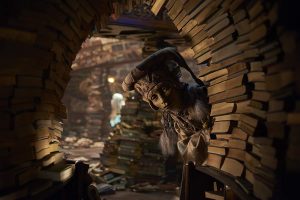 The Dark Crystal: Age of Resistance is a triumph of alternative presentation. The puppetry and practical effects are so intrinsic to the show that it’s impossible to not notice it every second of watching. I cannot imagine the work it took to create not only the various characters but also the massive, beautiful creatures and locations.

And that helps immensely with making this generic high fantasy story still unique from its contemporaries. The races and species are not only creative, but they are also completely alien-looking—since they aren’t (at least most) even humans in suits. These are not elves and dwarves with medieval-level advancement, but a new complex ecosystem, Flintstone-style usage of creatures, and straight-up magic and unique biology. The second that I learned only the females of the main species could fly, but all of them could share memories with close touch, they had my attention. 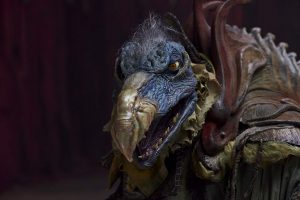 The Dark Crystal Is Full Of Truly Amazing Designs

And then there are the villains. Towering, amazingly designed vulture creatures that are canonically literal extraterrestrials—adding a delicious sci-fi aspect that just deepens the lore. These aliens are by far my favorite part of the show, not only because the puppetry for them is amazing but also because they have actors doing such deliciously slimy voices. Despite being ostensibly a corrupt aristocracy, they feel unique and look so memorable that I found myself thinking back on them the most.

All of this together is what saves Dark Crystal. It has novel levels of world-building done mostly effortlessly, molded to a unique aesthetic to overcome its greatest flaw: it’s such a generic plot. Like, noticeably so. You’ve read this basic plot overview when you were ten if you were at all a fantasy fan. 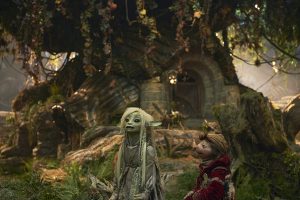 The Dark Crystal Has A Very Generic Fantasy Plot

Sure, the exact nature of the crisis and the implied slow creep of the evil from the villains in later episodes complicate matters, (I assume—three-episode rule and all) it’s ultimately a simple group of heroes going on a quest to save the world from an evil emperor. They even used the “you were chosen” line with one of the more likable characters.

Now, I’m not saying being predictable is a bad thing, not in this genre, not with this much creativity. In fact, if the show had more of a unique plot, it might have been too “out there” for a general audience. For someone who takes this show up randomly, it could be jarring as it is, with all the puppets and dark elements introduced early. From a marketing perspective, being able to understand the basic plot makes sense—and it frees up mental space for all the delicious subtlety of the vibrant world.

With all that laid out, I feel like you, dear reader, already have an idea if you’re going to want to watch this—by its very nature, it’s pretty polarizing—but I recommend trying it, even if you’re not a fan of high fantasy, even if you feel like a show of puppets might be too weird. I haven’t seen the movie this came from, but I don’t think that’s required to wholeheartedly say that this show is a masterpiece of creativity and worth a look at the very least. I want more puppet movies like this. The art form is fascinating, and this is a great introduction to its applicability.