What: An undersea mining operation comes across the wreckage of an old, Soviet mining vessel. When they come back from investigating, the crew unwittingly brings aboard a creature that hunts them down one by one.

Who: Peter Weller (Robocop) stars as the head of the mining operation. He’s awesome, as always. Other familiar faces from popular 80s and 90s films round out the principal cast, such as Richard Crenna (Colonel Trautman from the Rambo films), Ernie Hudson (Ghostbusters), Lisa Eilbacher (Beverly Hills Cop), Daniel Stern (Home Alone) and Hector Elizondo (Pretty Woman). If you ask me, The Expendables has nothing on Leviathan, as all the now obscure actors from the 80s are properly represented in a picture of their own here. The film was directed by George Cosmatos, who’s perhaps best remembered as the journeyman director who may not have directed many of his films despite receiving name credit for them.

When: Released in the spring of 1989, Leviathan grossed a respectable $15 million in the United States. It was part of a year that featured many aquatic-based science fiction adventures, most notable of all these being James Cameron’s The Abyss. 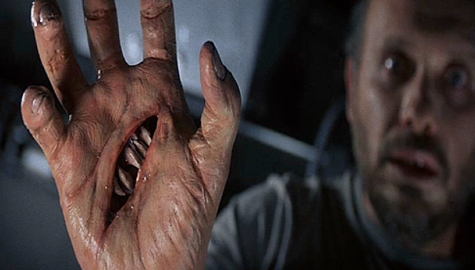 Why You Should Check It Out: Leviathan belongs to a sub-genre of science fiction that is sorely missed from the cinematic landscape these days. It is unpretentious, obviously inexpensive (but not too cheap as to be laughable) and filled with entertaining performances from actors who know exactly what kind of movie they’re in. It doesn’t take itself too seriously and it boasts the most seemingly noncommittal one-liner ever spoken by Peter Weller (I scoured the net for a link, but couldn’t find one. Just rest assured it takes place during the climactic showdown).

Why You Should Maybe Skip It: If you haven’t seen The Abyss, you have no business seeing this movie instead. Leviathan is far less ambitious and not worth your time, even though it is half the running of The Abyss. Also, the final moment of Leviathan is a head-scratcher, considering it makes our hero look less than admirable even after his moment of victory.

In a Nutshell: For those who enjoy their creature features quick and mindless without insulting your intelligence, Leviathan fits the bill.