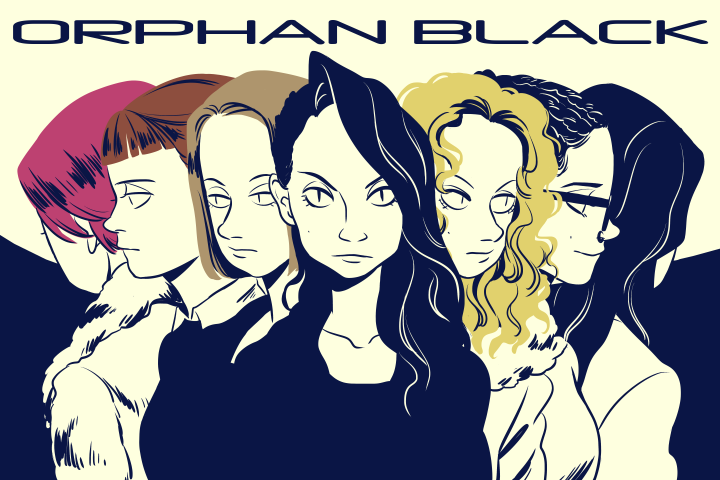 Click to find where I got this cool artwork! Doesn’t it look like an OB manga cover?

This show should honestly be four hours long. In fact, Saturday should just be Orphan Day, and one episode should last for 24 hours. Let’s get down to business because so much happened, SO MUCH.

Alison was definitely not the main focus this week, so let’s start there. They’ve locked her up! They’ve put her away! Far from her pills, Alison is “vacationing”  in a land where the only drink she will be having is water and maybe some juice. She’s in rehab. After her dramatic exit last week (one that she doesn’t even remember), Donnie has put her in a center. Now, Alison may have co-signed on this, but like I said, she doesn’t remember anything after the curtains went up. While I love a good ole drunk Alison, it’s probably in her best interest to get herself together. Donnie had the nerve to threaten to take the kids away if she didn’t stay for the duration of the treatment. 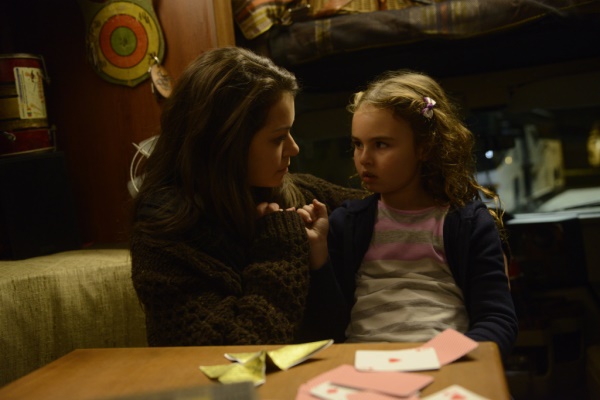 Well, bye Donnie. What are you going to do? Divorce her? Seriously? How is that a bad thing? Maybe they’ll bring in another monitor for her—one that looks like Sexy Man Paul, who we haven’t seen since the premiere and is coming back (without a shirt and hopefully pants) next week. I mean, what kind of passive aggressive threat was that? Take her kids, man. They don’t get a lot of camera time anyway. I don’t even know their names. Sometimes I forget they exist. We only care about Kira on this show.

Speaking of Kira, they’re on the run again. I knew Sarah wouldn’t die from the car accident because that would be like killing Hercules in a Hercules movie. What I wanted to know was who drove the truck that hit them.

It was Cal. Okay, so he’s not completely useless. This is only his second episode, so we’re still trying to see who he is and how he fits into the puzzle. While ramming a truck into someone wouldn’t be my first move, it was some quick thinking. I mean, what would you do in that situation? Sarah presumes Daniel died from the impact and takes his phone to text Rachel. They hide his car with some branches. (It always looks like such a joke when people hide cars with branches because, I mean, I can still see it. How do you effectively hide A CAR with some leaves? I’ve never seen that work.)

After scooping up Kira, they make their getaway in Cal’s RV. I have no idea where he’s taking them. I could be wrong, but I remember him brushing off the question by asking Sarah more about the Dyads. That makes me a tad suspicious (TRUST NO ONE), but Sarah doesn’t look worried, and I trust her with my soul. She uses a laptop on the camper and skypes Cosima (Cal must’ve hooked up some really good Wi-Fi).

There’s a glimpse of Cos watching Jenn’s videos again. Why do I feel like it isn’t Alison, but actually Cos who’s the most emotional one out of all the clones? I think she just hides it better, but think about it! Cos is the one hung up over a chick. Cos is the one watching depressing videos on repeat because she knows she could die soon. Alison’s method is probably just to avoid everything. What’s Alison doing? Drinking. Just drinking and moving. She’s always doing something, keeping herself busy. We hardly ever see Cos doing anything. While Alison is always seconds away from falling apart, Cos always looks like everything’s copacetic, and that’s the problem. People think Cosima can handle everything, but what if she can’t?

Anyway, Sarah leaves Cal with Kira, needing to find out more about Project LEDA and Mrs. S’s (doesn’t that look weird) involvement. At the still disheveled home of Mrs. S, she finds Fe, who helps her search the place. They discover a newspaper clipping with Rachel’s parents, Susan and Ethan Duncan, on it, something about six scientists dying in a lab explosion. Sarah thinks that the people in the picture of Project LEDA were Susan and Ethan. I always thought it was Mrs. S and a young Dr. Leekie. Sarah sends Fe to Cosima with the newfound information, and she heads off to Rachel’s place. Still using Daniel’s phone, she knows Rachel’s address and that she’s away on business. Time to do some major snooping at Rachel’s.

I’m assuming Mrs. S hasn’t been home yet because she’s extraordinarily busy being a badass and getting it in (a hallway, ladies and gentlemen, a hallway). Carlton is the man that gave Sarah to Mrs. S with the instructions to “go black,” so she meets up with him, hoping that she can do some digging about Project LEDA herself. He tells her he doesn’t know anything, just that someone named Kasov was a “ferryman.” Well, thanks for nothing, Carl. I wonder if he’ll be back as Siobhan’s (I just wanted to try her name out once) love interest. He doesn’t seem good with divulging info, but he might be good at something else.

Apparently, Rachel is an actual person. Calm down, I was shocked as well. It’s just that she always has that I-Eat-Small-Children face. 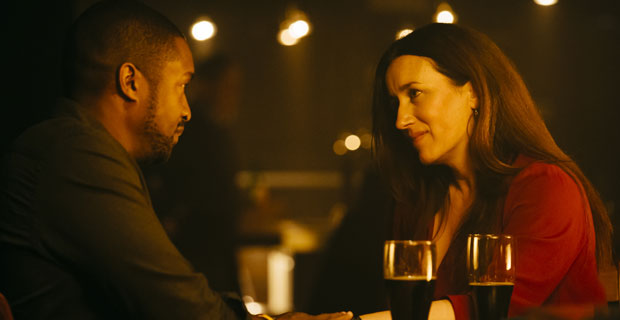 Sarah plays an old video of Rachel playing with her parents in the leaves. That kid does not look like an emotionless jerk. I wonder what her story is. It looks like we’ll be seeing more of Rachel next week, too.

Do you remember a few articles ago, when I told you that crazy people are harder to kill? Guess who comes stumblin’ in? Daniel.

Intent to find out what Sarah knows about Project LEDA, he knocks her out and ties her up in the shower. Apparently, he’s been spelunking with Rachel (even has his own space in the closet), and he’s her monitor, working for Leekie. Hm. I wonder if Rachel knows that. Cos assumed that Rachel was raised to be self-aware and that might have contributed to her haughty attitude, but we don’t know for sure. Anyway, this definitely bucks Rachel off of her high horse because she’s being monitored like everyone else. I guess Leekie is pulling a few strings.

Daniel’s plan was to torture Sarah into giving him information, but things don’t go in that direction. He manages one cut before he hears the music.

Then, he gets stabbed to death.

It’s like Kira said. Sarah has a guardian angel, and her name is Helena (Manning). Helena’s crazy behind saved her seestra’s life (again). She broke free from those Prolethian weirdos, and she’s just been following Sarah since she got away.

The girl, that redhead, the creepy Prolethian guy’s daughter whose name I should find out, tried to kill Helena. It’s bad enough that these people had been drugging her, but this kid tried to smother her with a pillow. I knew the second she turned around, it was over. You cannot, I repeat, you cannot, kill Helena. What is a pillow going to do? Absolutely nothing. Needless to say, Helena helped the girl take a nice long nap, and she ran. 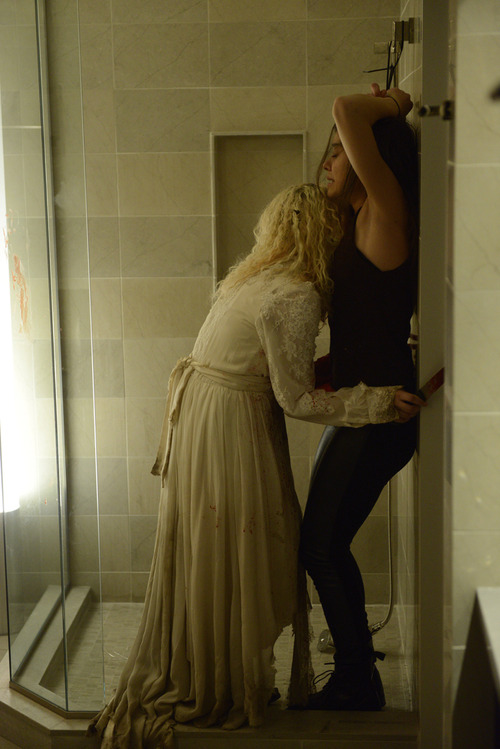 Before I get back to Sarah, can we just talk about the uselessness of Art? Why didn’t he go after Helena? I mean, he definitely bought her some time to get away, but he could’ve done more. I thought the Prolethians were going to kill him, to be honest. They very well could have and gotten away with it.

Anyway, THIS ENDING GAVE ME MY SOUL BACK.

Sarah and Helena HUG (heartfelt on Helena’s end, but probably terrifying on Sarah’s). The most important bit from this is that Helena asks Sarah for help. It’s blurry, but Helena remembers those Prolethians poking around inside of her, and she knows they took something.

We know, specifically, that they must have taken an egg from her, artificially inseminated it (probably with the head Crazy’s love juice), and now there’s a fetus forming. I’m more okay with this than what I was thinking. I was expecting something far worse from The Debauchery. I thought Helena was going to get pregnant the old fashioned way, except drugged, and would start to believe all that “family” crap as they turned her against the clones again. So, while it’s horrible and shocking and yes, we’re going into the forest, guns blazing to blow those hoes up, it could’ve been worse.

I wonder how many eggs they took? There’s always a chance the fetus won’t develop, but can you imagine next season if it didn’t? What kind of mom would Helena be?

I’m just happy she got away from those crazies, and she’s finally back with Sarah because I really want there to be something between them. Helena wants a family, and she has the capacity to love, but it’s hard to get in Sarah’s good graces. Also, Helena is crazy and a murderer, so yeah, the hesitation is understandable. I just want everyone to be a big happy family. Helena’s the only one that’s really related to Sarah and Kira anyway.  What’s one more aunt?