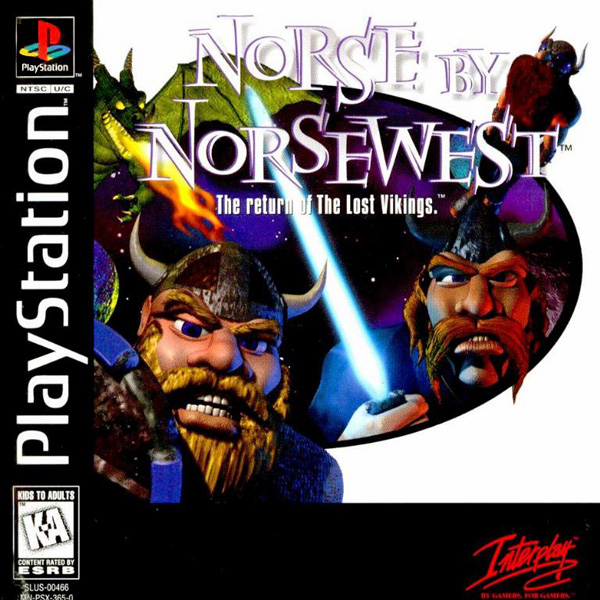 Return of the Lost Vikings came out in 1997.  It is a puzzle game in which the players try to guide Eric, Baleog, and Olaf, along with Fang and Scorch back to their own time.  The interesting part of the game is that each character has a certain set of abilities that must be used in conjunction with the others to complete the level.

Each level has the player try to find three objects and bring them to an end point, whether that be a witch, a sorceress  a time machine, etc.  For example, Olaf has a shield that stops enemy attacks and fire, he can fart to get a little bit of lift and break blocks beneath him, he can change his size to become very small, and by holding his shield above his head he can glide.  He cannot jump, which is one of his biggest drawbacks.  Of course, there are characters that can jump, like Eric.

This game is very well done.  I had a blast playing it with my brother as a kid and while it is difficult, it isn’t hard to the point that it becomes incredibly frustrating and tedious.  The levels are built so that each character you have is just as important as the others and that teamwork feeling is one of the game’s strong points.

Return of the Lost Vikings uses a password save method, which can be a double edged sword.  It allows you to play whatever level you want at any time, but if you lose whatever you write the passwords on then you will obviously have to start all over.

The absolute best thing about this game though isn’t the gameplay.  It’s the hilarious dialogue.  The use of voice overs is very interesting for a 1997 game, but it certainly adds to the humor of the game.  Olaf is an absolute idiot.  The reason the three vikings really get into trouble in the first place is because Olaf confuses a lever that says “do not touch” to say “doughnuts”.  The dialogue is snappy, quick, and funnier than a lot of sitcoms today,  well over a decade later.

I highly recommend checking this game out if you have it buried somewhere, or have an easy way to get it.  I’m typically a puzzle game hater.  The addition of puzzles even turned me away from The Legend of Zelda games.  This game however, won me over.  I enjoyed every second of playing it and I have a lot of great memories figuring out the puzzles with my brother.  Play it and perhaps you can make some of your own.