Even before we get the Disney logo, there’s a neat little animation sequence that kicks off Tomorrowland in intriguing fashion. In just a couple of minutes, we get the basic gist of what the titular place is without spelling everything out, even if it is just an excuse to give us voiceover narration, something I usually abhor. It’s enough to get us into the mindset for the type of adventure Tomorrowland wants to take us on, but the movie pushes its luck with an unneeded framing device and an oddly protracted prologue sequence. It speaks to the pacing issues plaguing Tomorrowland, a disarmingly optimistic family film that runs about thirty minutes too long and, sadly, doesn’t evoke quite enough wonder to stand alongside its lofty idealism.

Britt Robertson stars as Casey, a smart, resourceful teenager at her wit’s end with the way the world around her operates. Everyone’s too busy focusing on the problems going on in the world (typified by a montage of extremely negative high school lectures) with seemingly no one else around but her to ask, “Well, how can we fix it?” When she comes under the possession of a “magical” pin that transports her to a strange, idyllic world known as Tomorrowland, Casey finds herself on the run for her life. Aided by Frank Walker, once a young boy who, living in Tomorrowland, grew up to become a grumpy George Clooney, and Athena (Raffey Cassidy), a mysterious girl trying to fulfill her lifelong purpose, Casey must get to the bottom of this world only a few “exponential deviations” away from our own if she’s going to be able to save both from destruction. 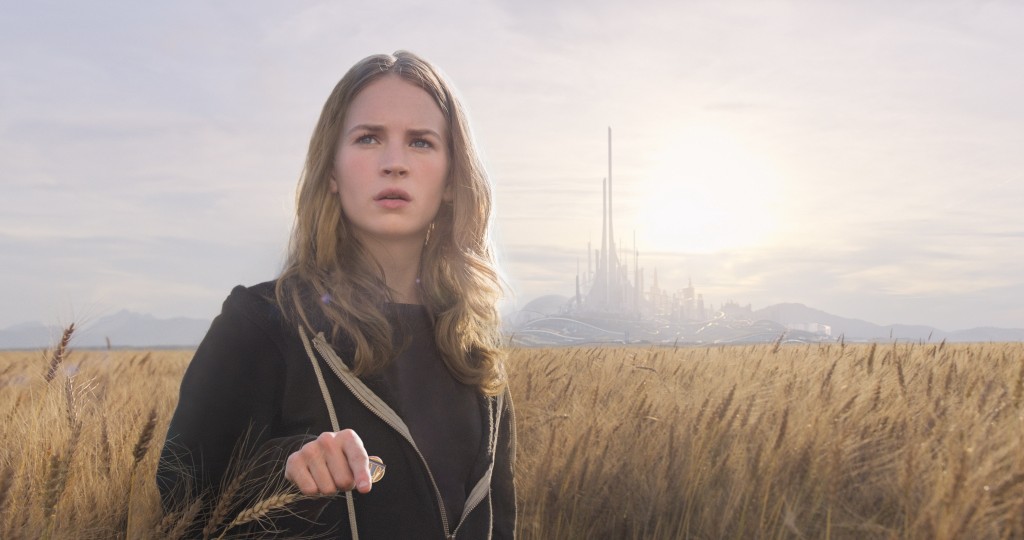 Above all things, Tomorrowland is admirable. For a movie based on a theme park attraction that sometimes operates as a corporate shill promoting future Disney movies, that’s a hell of an accomplishment. Director Brad Bird (the guy who directed the music video for the Bart Simpson rap song and then went on to direct a couple movies for some company called Pixar) makes a strong case for the whole “if everyone were just a little more positive” message at the film’s core in a way that surprisingly doesn’t come across as condescending towards the intended younger demographic. Reminiscent of family movies with children/teenagers in peril from the eighties (the earlier works of Spielberg and something like WarGames comes to mind), the message is incredibility simplified and painted in broad strokes, but it doesn’t feel condescending.

Having said all that, it’s a little distressing this movie about optimism that explicitly decries our wanton need for mass destruction in mainstream movies resorts to a big ole explosion, and not anyone’s intellect, to save the day. Even WarGames, a similar movie about the threats of extinction facing the human race, didn’t resort to anything so clichéd to resolve its central conflict.

At a hundred and thirty minutes, the whole thing starts to drag in the midsection, never fully recovering. Even as the movie unfolds, it’s easy to pick whole sequences that could have been severely trimmed to secure a leaner runtime, especially those showing George Clooney’s character as an adventurous tyke. The flashback sequence, too long to the point of delaying the actual story from starting for a good fifteen to twenty minutes, makes the whole enterprise feel more convoluted than it has any right to be.

Despite endearing performances from all three leads, solid direction, and family appeal, Tomorrowland fails to live up to all its potential under the weight of some questionable pacing and an ending that threatens to cheapen the overall message.

If you enjoyed N. Demmy’s fight for the future, you can find other such pieces right HERE and his earlier articles and reviews over HERE.