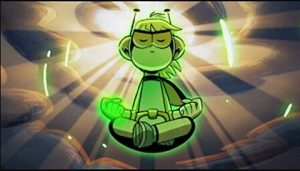 This Show Wears Its Many Influences on Its Sleeve

Kid Cosmic seems like the natural offspring of a few shows, and a few pieces of very prominent media. It wears those influences on its sleeve—so much so your enjoyment might depend on how willing you are to play along with the show’s specific inspirations.

Foremost, the thing impossible to not notice is the art style. I’ve seen only one other show do something similar—though I doubt it’s also an influence—and that’s Hilda. In that show, they use it to emphasize the fantasy aspects and give it an almost fairytale-like vibe. Here, Kid Cosmic evokes thick Americana and Golden-Age comics.

This brings us neatly into just how cheesy comic book/superhero style this show is by design. The villains call themselves evil, and everyone is on board fast with throwing around science-fiction terms. And then there’s the obvious one: the five rings of power. There’s no escaping the Marvel comparison there. 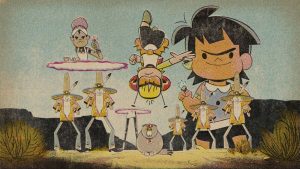 You Will Know A Lot Of This Show’s Plot Already

But imagery and pastiche are not everything. How is the story? How are the characters? Well, everything is rather solid in Kid Cosmic. Having Craig McCracken around, there’s just a level of breezy competence when it comes to making children’s cartoons. It’s got such assuredness that it can make elongated jokes and yet also establish plot points quickly. There’s a sense of play that makes it a lot of fun to watch.

But, on the somewhat negative side, I’d argue that’s all it is: fun and style, and not much new. This is Ben 10 meets Justice League. Sure, the show has a rather unique location. It’s almost entirely within a desert town where there appear to be only like five buildings, but that’s not enough to deviate from the cliché. The powers, likewise, are interesting in their choices—self-cloning and size-manipulation being the more curious ones—but they are just a team of superheroes learning to be better. 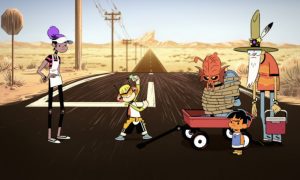 Kid Cosmic Does Little New With Its Characters

Similarly, except for Grandpa G, who’s at least kind of kooky in his total acceptance of what’s happening, the characters are stock. “Kid,” the high-flying hero, is snarky, funny, energetic, and obsessed with comics. A classic kid protagonist. Jo, our other main, is wise beyond her years but is mostly just a responsible teenager. And then there’s Rosa, though she’s a well-done character, she’s also the “little child is secretly absurdly powerful and competent” joke done with zero innovation.

I don’t mean these to be deal-breakers. For kids not yet desensitized to this exact plot structure, or adults who want to see the tropes played straight but gracefully, Kid Cosmic is charming. It’s breezy. I’m happy it exists. I feel like it will become a nostalgic property to the newest generation. It has that element to it. I won’t be continuing the series past what I watched for the review, but don’t let that deter you from trying it. 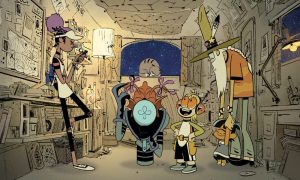