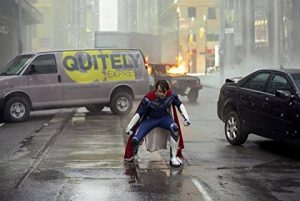 Jupiter’s Legacy Is Actually Difficult To Sit Through

I’ll admit I took three or four days to finish my three-episode watch of Jupiter’s Legacy. This was partially due to scheduling issues, but also because this is one of the most uneven, disjointed, awkward superhero series I’ve ever had the displeasure of slogging through.

Like, where do I even begin with this mess? I suppose with an explanation of what I mean by “disjointed.” Jupiter’s Legacy claims to be a series about the familial relations of a superhero team, full of drama and the stress of trying to live up to a demanding father figure. And, for a few minutes, it’s partially that. But then the series hops around between so many moving parts—and timelines—that it becomes about three shows in one. The Mitchells vs the Machines makes multiple plot ideas converging work, but Jupiter’s Legacy is nowhere near that competent. 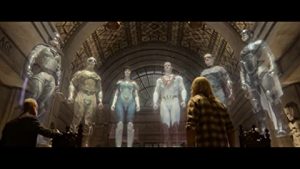 This Show Is Just A Awful Mess of Disparate Ideas

And what’s especially funny is the section without superheroes is by far the best part. The main plot is an absolute mess. The actors have strong emotional moments—the dialogue is genuinely well done—but then they have a fight scene. I’ve seen micro-budget shows/movies with a better understanding of how to do a superhero fight scene. Attempts in Jupiter’s Legacy are horribly shot, badly paced, and hilariously fake looking. The costumes look bad. The choreography is sloppy. The energy blasts evoke a Youtuber’s first foray into visual effects. It reeks of action figures being tossed around in a blender, with some attached to fishing lines to simulate flight. 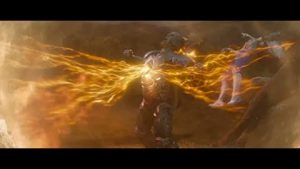 The First Fights In Jupiter’s Legacy Are Laughable

It’s awful. The only good use of “science fiction” is number two of our three-part mismatch. That instance comes up in a now-familiar side plot: the heist squad. I didn’t expect to see it so soon after Shadow and Bone, but here we are. Sadly, only one of the character’s “powers” in Jupiter’s group is presented in any interesting way. But credit where credit is due, the teleporting rod used by Hutch is a cool—and overpowered—weapon that leads to one of the better scenes.

But I’ve danced around it long enough, what’s the good part of the show? Well, it’s the historical drama about a stock market crash, naturally. Showcasing remarkably vibrant costumes and lighting, spacious locations, and solid acting from everyone involved, it’s like a different show. With limited screen-time, they commit to a story about wealth, friendship, and the domino effect of tragedy. These scenes deal with heavy topics, and may even be hard for some to watch, but they’re moments of competent storytelling and presentation. It’s supposed to be—at least from what I can tell—a windup to introducing superpowers to the world, but the amount I saw of it has real merit. It’s a shame the whole show wasn’t about this. 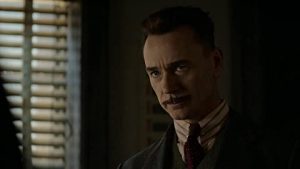 A Better Show Somehow Ended Up In Flashbacks

Oddly, though, that’s not the only time Jupiter’s Legacy pulls away from a good idea. The Code (a moralistic rule set used by the superheroes, including no killing) is also mishandled.

With how loaded a topic it is, you’d think they’d explore it constantly. You’d think every scene would touch on it from a new angle. If the show stuck to a discussion of the relationship between superpowers and lethal force, it could’ve been a masterpiece. Not only would it be challenging television, but it would put it on the same level as Invincible in terms of exploring superheroes in a new, relevant, fresh way. The only way to combat superhero fatigue is to lean hard into something worth discussing or something inherently genre breaking. Yes, it would be extremely politically charged and there’d be pushback, but at least the show would be worth thinking about beyond the time it’ll take me to write this article.

As it stands, Jupiter’s Legacy is not a good show. Its stronger moments fail to outweigh its baffling choices. It wastes its ideas, and thus the audience’s time. If you want to watch it, just read the think-pieces it generates. They’ll be more invested in making a coherent artistic statement. 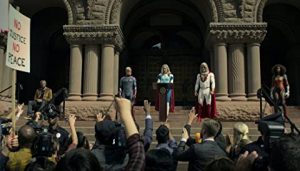