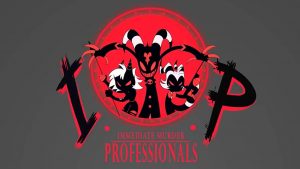 Helluva Boss Does Not Fill The Space Left For It

Helluva Boss is no Hazbin Hotel. It does not even come close. But does that mean I hate the show? No—I don’t even actively dislike it. There are redeeming aspects to this internet series, but it’s also got a lot of the bad parts of Hazbin, with a lot less of the charm.

Let me explain. I’ll start with the positives. For one, the worldbuilding has always been amazing. This version of Hell is fun and interesting. The premise for Helluva Boss is built atop it, and thus solid. Using a native species to Hell easily makes this show feel different from its sister series while still grounding it in the same concepts and themes.

And then there are the standouts. The animation. The voice acting. The singing. The first is just as fluid and snappy as it was in Hazbin. A lot of very detailed and interesting designs of monsters and demons move around the scenes like they are alive—and that’s just impressive. The expressions and the flow of it all are worth the price of admission. 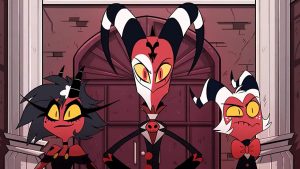 And then there’s the voice acting. I mean, you involve Zim’s voice actor in a project, and you’ve already got me to watch your show—but everyone here has range, emotion, and often wonderful singing voices. It’s a delight whenever characters break into song—it almost makes you forget how it’s being sung by characters who are heinous sociopaths.

And with that ending two words, we can switch over to the problem with watching this show: the awfulness of the demons. I’m not including Moxxie and Millie in that criticism. I didn’t know I wanted an imp murder-couple hopelessly in love with each other, but they are the reincarnation of Morticia and Gomez Addams and that’s a genius move. 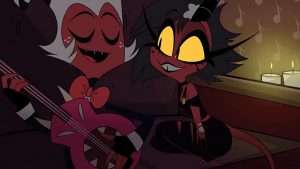 Helluva Boss Has Such An Adorable Couple In It

No, it’s the other characters. The ones who spray cusses and swears and sexual terms with the rapid-fire spit of a machine gun. I know this story takes place in HELL and that all the characters were sinners, or are born of a terrible, horrible, awful place, but that does not mean we, the audience, have to deal with this dialogue. Cussing is fine by me—but here it’s constant. If the swearing was funny, then it would add something. But it becomes white noise whenever it’s not obnoxious.

And then there’s the empathy aspect of things. Like, again, I don’t need the characters to be good people, but I do need to connect to them. If something bad happens to Moxxie, then I care. I care because he’s a fun character who has relatable moments. But, at least until episode three, Loona is unlikable, and Blitzo is absolutely the worst. He’s not fun, not enjoyable, and highlights all the show’s issues. His voice actor is doing a great job regarding delivery, but he’s written in such a way to be unredeemable and annoying. 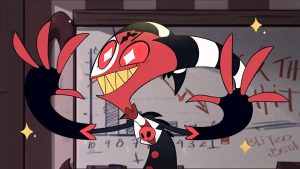 Like, if Blitzo were on screen a lot less, and the plot did not move with him, I would like this show a lot more. No matter how awful, most of the other demons we meet are at least fun in their evil or have a defined goal. But Blitzo is just empty.

Now, it’s rare for me to be unable to overlook immorality and adult content, but Helluva Boss manages it. If a few issues and a few characters could be smoothed out, then it would become something great. Helluva Boss would be a dark sitcom that carries its audience along on amazing songs and shows off a wonderful setting. The animation is there; the core is there—it just needs to mellow out. I’m still riding the goodwill from Hazbin Hotel, but that may be the only thing keeping me interested enough to check in each time an episode goes live. 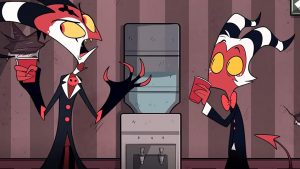