Logan (played by Matt Frewer) has taken over the warehouse, but his group is angry over not finding something and threaten to kill him if they don’t. Meanwhile, Morgan played by Lennie James) and Grace (played by Karen David) find Alicia (played by Alycia Debnam-Carey) and put her in a decontamination shower although Alicia worries that she’ll still get sick.

Morgan spots a horde of walkers and they try to lure them away from the plane. They attempt to use the siren to distract them, but it abruptly stops. An explosion follows and their car gets stuck forcing them to run as the walker’s double back. June (played by Jenna Elfman) worries about John (played by Garrett Dillahunt) who’s working to get back with Dwight (played by Austin Amelio). Meanwhile, Sarah (played by Mo Collins) finds Logan just as his group is leaving the warehouse. Sarah tries to appeal to Logan to help them light up the runway when the others try to land that night, but Logan staunchly refuses to stick his neck out for anyone but him. John and Dwight get within radio range but there’s a chance they won’t get back in time; he refuses to say where they are and makes June promise to leave with or without him. 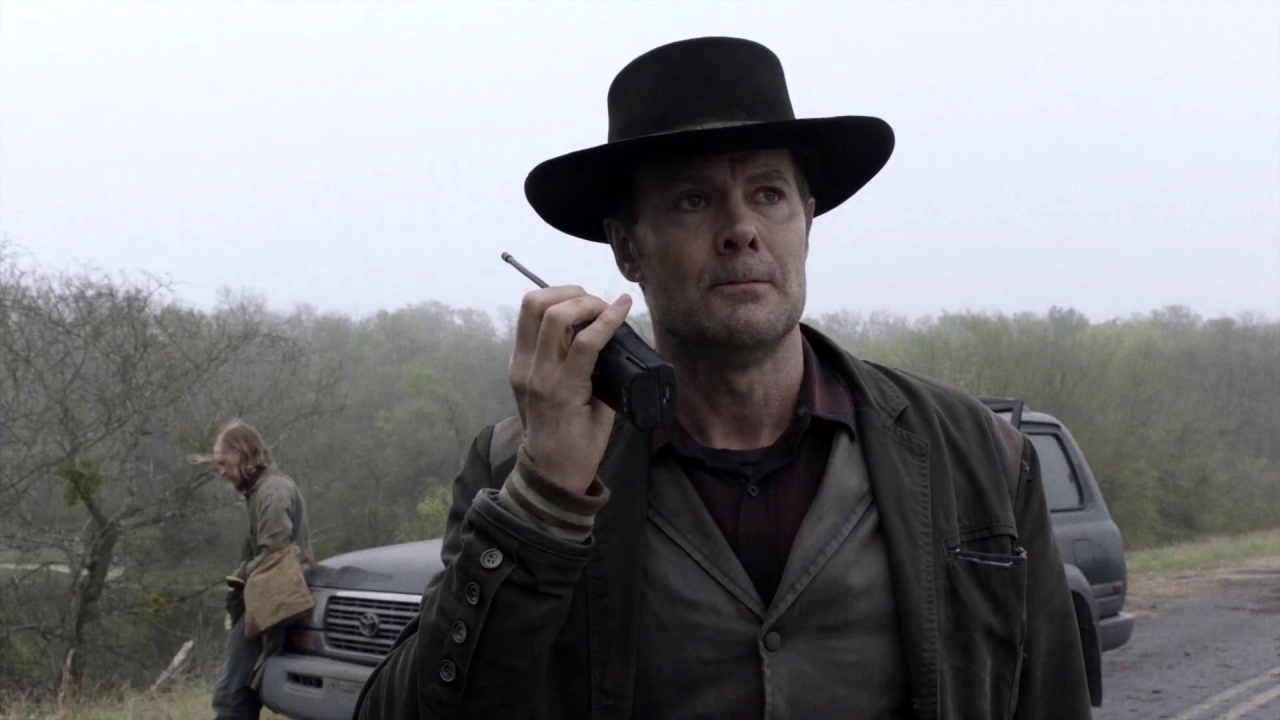 Will they or won’t they make it?

Alicia’s fine; there was a brief exposure scare for dramatic effect, but any chance of her dying got literally washed away, she’s too big a character to kill off, at least at this point. I fully expect her exposure to be brought up once or twice but never be a major plot point after that. It’s a disappointment to see the buildup with Logan amount to nothing after shaping up to be a showdown in the second half of the season. Meanwhile, John and June, our resident Romeo and Juliet continue finding themselves torn away from each other. It wouldn’t be a finale without drama and the two separated lovers is good drama. But considering Dwight lost his happily ever after (at least for now) someone must get one and it’ll be them.

Daniel (played by Ruben Blades) finds Sarah and Wendell (played by Daryl Mitchell) with something to help them land the plane. Morgan, Alicia, and Grace make it to the plane but with the walkers right on their heels. Morgan and a few others slow the walkers down but a cloud of radioactive dust blows towards the plane; just before they leave Dwight and John drive up in a car and everyone boards the plane, they take off and just avoid the dust cloud. Alicia wonders what they’re next move is; Morgan says they’ll continue helping people while continuing to live for themselves, too. John takes the opportunity to propose to June using a makeshift ring and she enthusiastically says yes. That night, Daniel, Sarah, and Wendell use Christmas lights as a landing strip, unfortunately, Wendell is attacked while gassing the generator and the lights go out. He just manages to get them on before the plane crashes and they make a bumpy but safe landing. 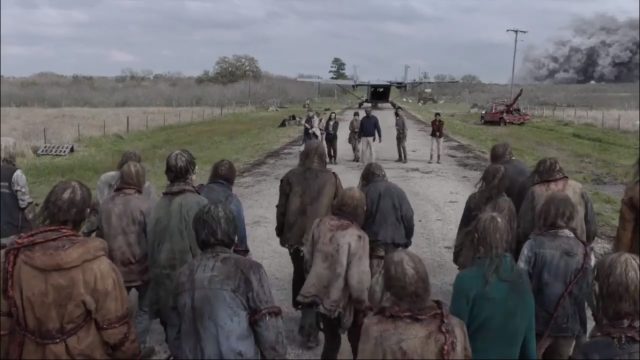 Overbooking is a real problem.

It’s Christmas in July (or whatever month it is in the show) and instead of another Lost style plane crash, we got a miracle. That was a great fake-out with Wendell; saying his goodbyes to die a hero but instead he gets to live a hero, usually, those monologues mean that character is out the door. There were the expected close calls with walkers and the race to beat the reactor, but I’m disappointed we didn’t get an epic explosion as they flew off to the mountains. Maybe it wasn’t in the budget, but it would have been a great visual while everyone was flying to safety. Alicia and Morgan are going to live for themselves, Alicia more because she’s worried she’s sick (she’s not though). John and June are officially engaged, so we’ll get to see how people throw a wedding during the apocalypse. Somehow, it’ll involve walkers and danger, because this is The Walking Dead.

Everyone enjoys happy reunions all around and introductions are made, Morgan gets a call on the radio from a woman asking for help, but they get cut off. Logan arrives and gets a less than warm welcoming. Logan was searching for the location of a gas supply but didn’t find it at the warehouse. Turns out Morgan and the others have the location and Logan knows how to get to it. He explains that he has things to make up for as well and wants to help, and they’ll need it if they want to keep helping people or his (former?) group may beat them to it.

The group had about ten minutes of happiness before it was back to business. I don’t know why, but I’m convinced the woman on the radio was Sherry. Stranger things have happened and also what other stories could they make for Dwight? Logan decided to turn over a new leaf but only because his crew kicked him out (and kicked his ass). There’ll probably be a brief fight with these no-name people but that’s a weak way to end the episode.

“You okay?” “A nuclear plant is melting down but I did just have a hot shower so there’s that.”

This must be the last time any of these people gets on a plane.

“From the moment I laid eyes on you I knew I’d found my reason to live. I want you to always have a reason to, whether I’m there or not.”

How long will they be a happy family together? Getting split up has become the norm for this group.