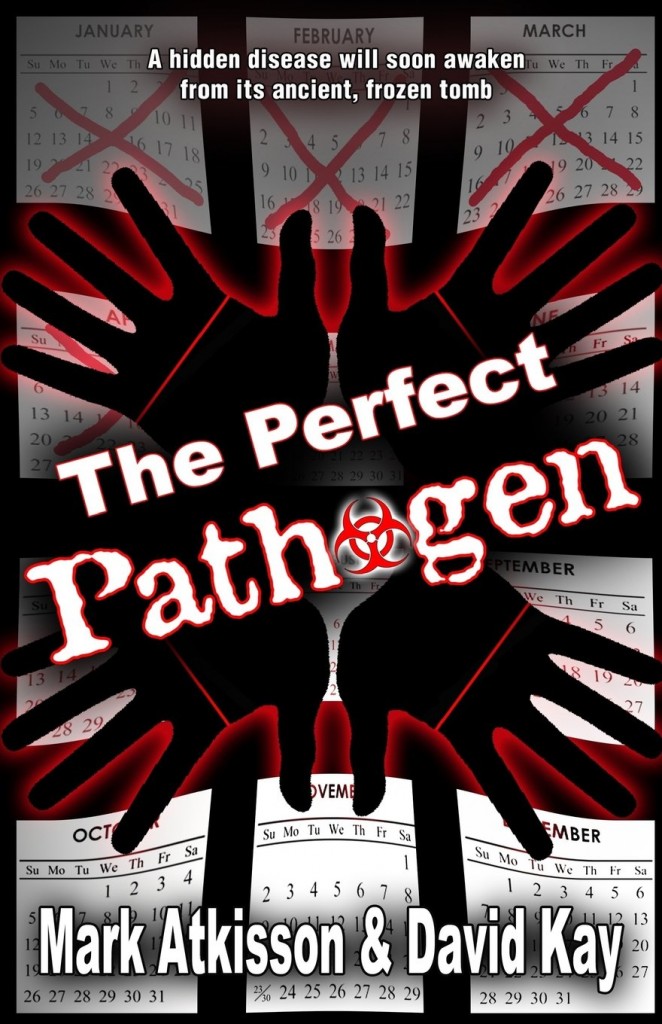 There is a part of me that is curious to know how the sci-fi publishing community is currently marketing books that have to do with pandemics right now.  One isn’t sure whether they may quietly put them on the back burner in favor of dealing with nanotech or something less pertinent, or whether they will charge full steam ahead. In the case of The Perfect Pathogen, it appears that the timing is entirely coincidental. The book also has the advantage of revolving around the effects of global warming along with that mysterious disease, keeping it from being too uncomfortably apt.

The Perfect Pathogen is the creation of two first-time writers, Mark Atkisson and David Kay, who have both worked in the United States federal government for many years. It’s apparent from what I was able to read of the novel—the first six chapters—that they definitely know how bureaucracy works, and can realistically depict team dynamics and how people have to balance work and family. The more purely scientific aspects of the story so far have managed to peak my interest as well. Apparently, the story will pull in climate change and link it to something that is killing off the elder portions of the population. But it’s one of those books that gives you little pieces of information slowly and that, one hopes, plants details ahead of time that will pay off later.

To be honest, the characters are not very developed even six short chapters in. But they are likable enough, and other reviewers have said that by the time you need to be emotionally connected to them, you are. This fits the slow-burn sort of style the book has in terms of plot, so I would not be too surprised if this were true for its characters as well. The story is told from two main points of view, and chapters seem to alternate from following Dr. Katie McMann, an aging specialist, to her husband, Rob, founder of a training center for youth with special needs.  Even though one assumes Katie will take the lead in this story, I found Rob more interesting simply because his goals were obviously personal. Once the plot really gets rolling, and the pieces were already coming together as of chapter five, Katie should hopefully take center stage. I’m pretty sure the subplot will feed into the plot, as it often does in neatly structured thrillers, so the duo can probably help each other out. I wasn’t able to read far enough to know whether the tension ramps up appropriately, but an increasing death toll usually has a way of making the stakes pretty clear.

The book already has a sequel in the works, and other reviewers who read to the end mentioned that they were glad that is the case. This is a first-time book, and a self-published one at that, so kudos to the writers for their work ethic and plugging away at their story. There is definitely room for growth, but I think they have the potential to have a nice trilogy of they keep it up.

If you enjoyed B.K.’s preview, you can find the rest of her work right HERE on Sci-Fi Bloggers. You can also follow her on Twitter @kobayashiXmaru.