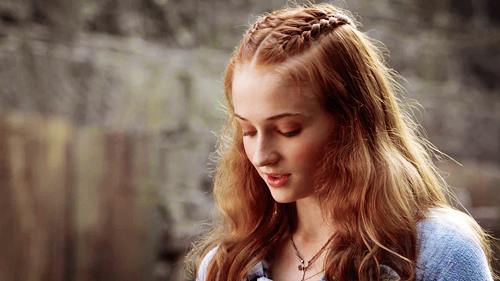 “Sansa was a lady at three, always so courteous and eager to please. She loved nothing so well as tales of knightly valor. Men would say she had my look, but she will grow into a woman far more beautiful than I ever was, you can see that. I often sent away her maid so I could brush her hair myself. She had auburn hair, lighter than mine, and so thick and soft… the red in it would catch the light of the torches and shine like copper.”

In mourning of the lack of Game of Thrones this past weekend, let’s talk about one of the more controversial characters in Westeros: Sansa Stark. It seems that everyone has an opinion about Sansa—she’s stupid or she’s smart—and while Sansa’s not my favorite character, she deserves some respect.

“It’s her fault Lady died!” I didn’t like Sansa yet at this point, but I definitely didn’t think that it was her fault. She didn’t flat out lie for Joffrey after Nymeria bit him, but she didn’t clear Arya’s name either. When the books began, Sansa was eleven years old. (I’m not sure how old everyone is in the show, so we’re going by the books.) Sansa was an eleven year-old girl with a crush on the man who would inherit the Seven Kingdoms. To her, there was a misunderstanding (because she didn’t KNOW that he was psycho yet) that led her little sister and her crush to fight. When Robert sentenced her wolf to death, she finally fought until her father sent her away.

“She was mean to Arya!” Arya is her sister, but that doesn’t mean that they have to be alike. My sister and I are two years apart and we are polar opposites and we do not get along if you keep us cooped up together for long. Yes, Arya is a badass, vengeance-seeking little tomboy that kills people. Sansa is a lady who was raised to believe that she was beautiful (which she is) and that she would marry a valiant man and have a fairy tale life. At eleven, that is what she was taught, that is what she dreamt of. I thought I wanted to get married and have kids at eleven too, and I’ve definitely changed!

“It’s her fault Ned’s dead!” She TRIED to save her father! She pleaded with Joffery and Cersei for her father’s life, and when he agreed she thought that she’d done right. Until they cut off his head right in front of her. 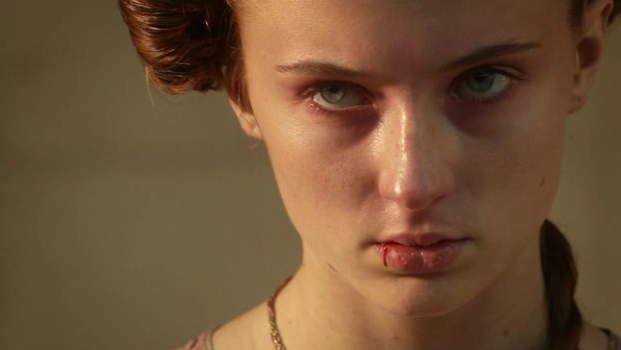 “She’s so stupid!” You try being a little girl in the literal lion’s den. She learned quickly that to keep herself from frequent beatings she should always agree with everything Joffery said and make him feel important. I wouldn’t be able to do it. I have a hard time being nice to customers at my job. Imagine feeding a whiny little Bitch-king’s ego constantly while he’s threatening to have you beaten in front of a crowd.

“She should have run away with the Hound!” I mean, she’s literally holding a doll in this scene, perhaps to remind viewers that she’s so young! She’s terrified of the Hound, she’s seen him cut someone’s intestines out. Plus, do you know how high the chances of getting caught were? I wouldn’t have gone. Plus, in the books, he was being a bit rapey.

Also, I’d like to point out, that in the books he made her sing to him. He later told Arya that he and Sansa got along swimmingly and that she’d even sang for him before. Until one night, in a pretty upsetting scene, he confessed to Arya that he had FORCED her to sing to him.

“But she’s mean to Tyrion!” Okay, okay. Let’s think about this for a second. The people that Sansa mistakenly trusted: Joffery (basically a Lannister) and Cersei (also a Lannister). They acted like they were on her side and then used her, betrayed her, and hurt her. Why in the hell would she trust Tyrion Lannister? Not only is he a Lannister, but she was FORCED to marry this man. And, in the books, she didn’t get a warning either. Nope. They were fitting her for a dress, and then brought her to the hall and performed the wedding. She literally found out as she walked down the aisle.

Yeah, he was being nice to her. No, he wouldn’t force her to sleep with him. This didn’t mean anything to her. She’d been used far too many times to fall for that. Just because we, the audience, know that Tyrion is awesome doesn’t mean that she currently shares our views.

So then she goes to the Vale, meets her mother’s sister and thinks that everything’s going to work out. And then what does Aunt Lysa do? She threatens to throw her out the Moon Door because her creepy old pretend father forced her to kiss him. How is this her fault? How is any of this her fault? 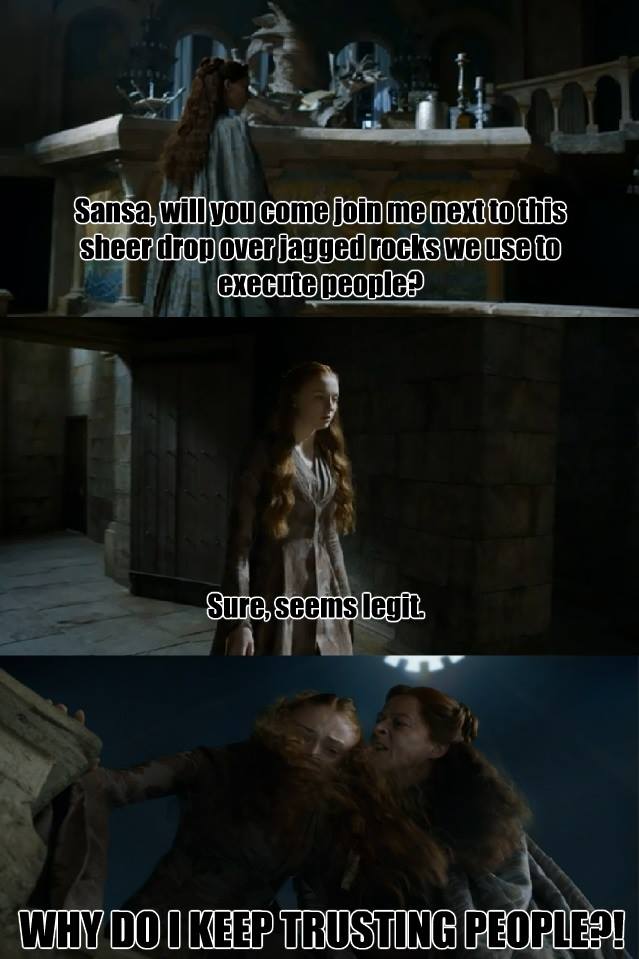 Sansa Stark is constantly getting the crappy deal and then being blamed for it because, in the beginning, she was a shallow little girl. I’ve been told that my Sansa supporting ways make me an anti-feminist, Twilight loving, non-book reading idiot. Wow, that’s harsh and inaccurate.

My predictions for Sansa Stark? Lady of the Vale and Winterfell. She will be a fair and just ruler who now knows how to play the Game of Thrones—win or die.