Michonne (played by Danai Gurira) sits at a the destroyed bridge where Rick (played by Andrew Lincoln) ‘died’ and talks about how even though she still struggles with losing him, she hasn’t given up hope. A search party is out for Judith (played by Cailey Fleming) and she finds them with the strangers she saved, the others are reluctant to bring them back but Judith refuses to leave them.

Carol (played by Melissa McBride) is living happily in the Kingdom (but doesn’t accept the title of ‘Queen’) but deals with constant hiccups in the infrastructure. She and Ezekiel (played by Khary Payton) also deal with their adopted son Henry (played by Matt Lintz) leaves home to join Hilltop. The new arrivals led by Magna (played by Nadia Hilker) are in awe of Alexandria but receive a less than warm welcome. The group decides to have a council meeting and vote on their fate the next day. They’re questioned about who they were before, where they’ve lived and what they did to survive.

Michonne is still skeptical and reveals Magna used to be in prison and finds a knife hidden in her pants. Some people like Gabriel (played by Seth Gilliam) think their good people and want them to stay, and Gabriel has the idea of branching out to find more people. Rosita (played by Christian Serratos) offers to help and it’s’ revealed they’re in a relationship. While heading to Hilltop, Carol and Henry hear a woman calling for help but it turns out to be a trap set up by former Saviors. 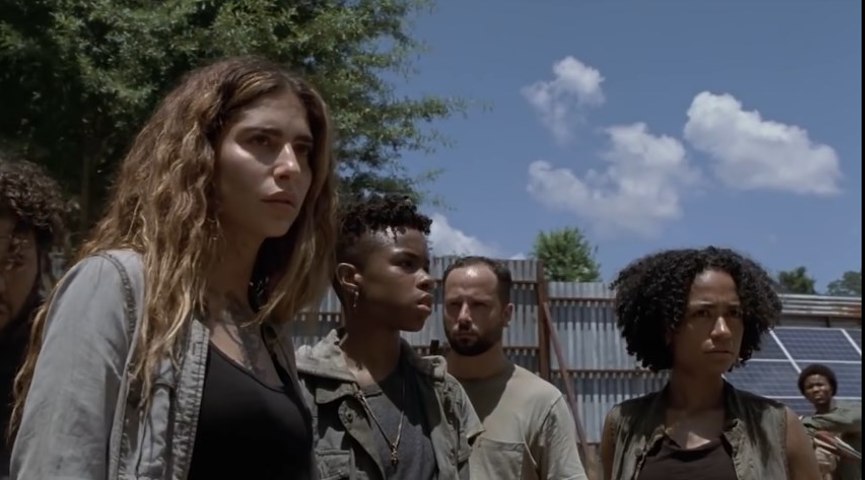 Although it’s been years Rick’s memory is alive at least for Michonne who’s taken up her old habit of talking to the dead. While Michonne is struggling everyone else seems to be getting by, it’s surreal to see Carol looking so matronly and living such a normal life. With such a huge time jump there’s we’re playing catch up, Magna’s group isn’t welcomed because something bad happened to the group somewhere along the way; likely a hostile group of people. There’s a lot thrown at us and I’d like to learn more about things like what happened to the Saviors but there’s a lot of interesting stories set up.

Magna is the most fleshed out of her group but overall there’s intrigue with them all, I’m particularly interested in seeing how someone who’s deaf can manage day to day life in the apocalypse. Judith is a main point of interest because until now she was a character on the periphery and more of a plot device than anything, but now she’s grown into a character I want to know more about.

Rosita and Eugene (played by Josh McDermitt) head out to plant a transmitter so Gabriel can try to radio people. Jed (played by Ryhs Coiro) leads the Saviors, who have been living outside since the Sanctuary has gone under. Because Carol spared Jed once he allows them to live, Henry tries to attack when Jed tries to take Carol’s wedding ring but he’s easily subdued. Judith is doing homework while getting help from Negan (played by Jeffrey Dean Morgan) and they talk about Michonne’s decision to make Magna’s group leave. Negan thinks Michonne’s cautions is warranted given how dangerous people can be but Judith disagrees.

Rosita and Eugene encounter a herd of walkers but Eugene injures his knee which slows their escape. Magna wants to fight if they’re evicted but Luke (played by Dan Fogler) and the others don’t want to resort to violence. That night Henry questions why Carol didn’t fight and she says it was to protect him, but later she sneaks into their camp and douses the Saviors with gasoline. Jed wakes up and Carol tells him some of the things they had belonged to people who never returned to the Kingdom, for that and threatening her son she burns them alive. 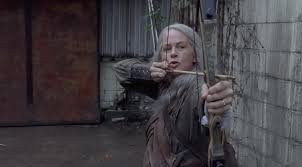 Rosita and Eugene were probably wishing they could run into new people while they were busy running from all those walkers. Judith’s relationship with Negan looks complex; it doesn’t look like she cares for him but Judith goes out of her way to talk to him. My theory is because Rick fought so hard to keep him alive Judith feels some kind of connection with him. Hopefully we’ll see more of Negan because he’s been underused so far this season. Magna’s group looks to be out the door but I doubt they’ll be leaving because their characters have been set up too well to just be gone after one episode.

Most of the Saviors resorted to a life of stealing because they were too afraid (or proud) to migrate to other communities. Jed still feels a sense of honor towards Carol for sparing him but seeing Jed threaten her son, Carol did not extend that same courtesy. For anyone who thought Carol’s new look meant she lost her fighting spirit it was literally lit up tonight. As great as it is to see Carol in wedded bliss it’s much better to see her as a badass fighter.

Magna prepares to sneak into Michonne’s house to attack but notices she has a young son, instead she knocks on her door and hands over her weapon. She says she’s done terrible things but Michonne says they all have to have lived so long. Michonne spots Judith sitting on the stairs with Rick’s old revolver and Judith says Rick would have wanted her to save those people and is worried because she’s starting to forget his voice. Carol and Henry come across Daryl (played by Norman Reedus) who’s been living as a nomad. Just as Magna and her group are ready to leave Michonne offers to take them to Hilltop to see if they will take them in. Rosita and Eugene cover themselves in mud to hide from the walkers and as they walk past several talk, saying they can’t let them escape.

Magna has a heart and Michonne has a son; can’t wait to see Rick Grimes Jr. grow up to be a gun slinger like his dad. Magna’s admission and Judith’s approval were enough to convince Michonne to at least not throw Magna and the others out onto the street. It’s also a bit heartbreaking to hear Judith is starting to forget Rick. The big shock of the episode is hearing walkers talk but obviously their not suddenly getting smarter. The Whisperers have been teased for months and it looks like they’ve finally arrived. That would make everyone’s nervous attitudes around Magna and her group when you’re dealing with creepy walker people.

Daryl must be taking things especially hard to be living in self-imposed isolation.

“Around all this darkness, there are flashes of life. Tiny beacons that shine out, calling to us.”

Gabriel is really killing it with the ladies this season.