Rick (played by Andrew Lincoln) hallucinates seeing himself from the hospital at the onset of the outbreak, then wakes up to see the walker horde bearing down on him. He frees himself from the rebar he fell on last episode and badly wounded just makes it onto his horse and makes it to an abandoned cabin

While just barely keeping ahead of the walkers Rick hallucinates seeing Shane (played by Jon Bernthal) watching the scene of the accident that put him in the hospital before the outbreak. Shane reminds Rick of some of his more violent acts and says that’s what it takes to survive; to be like Shane. Rick refuses and wakes up and just escapes from the horde of walkers who just showed up and gets back on his horse. Michonne (played by Danai Gurira) learns Maggie (played by Lauren Cohan) is in Alexandria and stops her from getting to Negan’s (played by Jeffrey Dean Morgan) cell.

Michonne tries to talk Maggie down but she wants revenge for losing her husband and raising her child alone. She needs to see Negan die and says Michonne would have killed him if it was her; unable to rebut Michonne lets her in. Maggie demands Negan get on his knees but he rehashes Glenn’s (played by Steven Yeun) death to taunt her. He demands that Maggie kill him before breaking into tears begging to be killed, he wants to be with his dead wife but can’t kill himself and can’t bear his imprisonment. Maggie declares him worse than dead and locks him up. 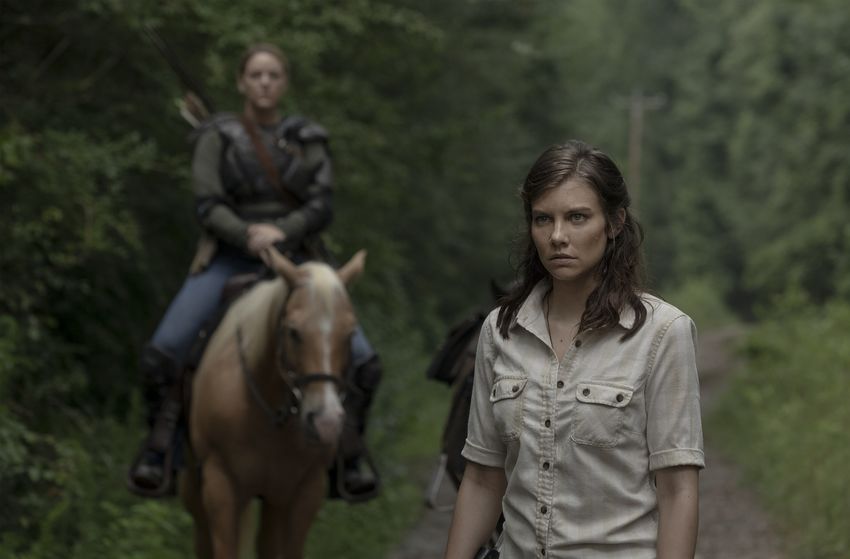 Woman on a mission.

No other character on this show has gotten such a grand sendoff and nobody else likely will. Rick just saved himself but there is a finality to his journey, it doesn’t feel like a ‘will he survive’ story as much as a ‘how will he go out’ story. But whatever happens there are lots of great character moments, like getting to see Shane again and watching them casually banter about his murder and how Rick led everyone was fun.

Maggie finally makes it to Alexandria and her rage and grief are palpable. It seems like almost no time has passed since Rick spared Negan but for Maggie it’s been over a year of trying to live with it and move on but not being able to. There’s nothing MIchonne can do or say but seeing how broken Negan became gave Maggie the closure she needed. She wanted to kill Negan but all she saw was a broken man tired of living but too scared to kill himself. This is a satisfying conclusion to Maggie’s current story arc but with news that Lauren Cohan is also leaving the show could Maggie’s happiness be short lived?

Maggie leaves Negan’s cell when she and Michonne get word of trouble by the bridge. Meanwhile Rick is slowly bleeding out and passes out on the horse, next picturing himself on Herschel’s (played by Scott Wilson) farm. Rick tries to apologize about his death and what Maggie lost but Herschel says it will make her stronger. Rick says he can find his family there but Herschel tells him to wake up, Rick briefly wakes up before passing out on the horse. Rick finds himself in a field full of the bodies of everyone he loves. Sasha (played by Sonequa Martin-Green) rises and tells Rick he ‘did his part’ like she did.

Rick wakes up on the ground having fallen off his horse, he’s on the bridge with walkers surrounding him. Rick looks done for when he’s rescued by the group and comforted by Michonne but he realizes this is also a hallucination. Rick is on the bridge when Daryl (played by Norman Reedus) kills a walker from across the river. Michonne leads the others to attack the walkers from behind but Rick doesn’t want them to die for him; spotting a box of dynamite he shoots it killing himself and destroying the bridge. 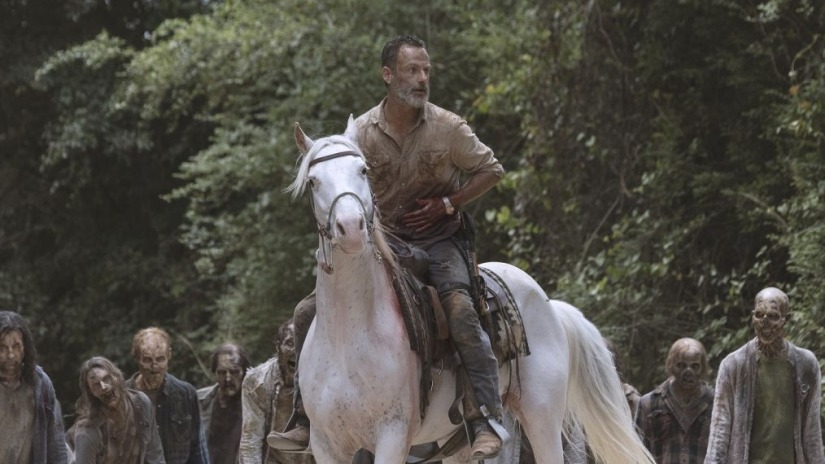 Rick has his goodbye tour throughout the episode as he keeps passing out, and aside from the thrill of seeing someone like Herschel the scenes all clearly telegraph Rick’s death. The most blatant clue was Sasha referencing her own suicide to help save the group which was clearly on Rick’s mind on the bridge. The episode followed the usual pattern; someone is nearly killed by walkers and the group rides in at the last moment to save the day. Rick gets his brief happy ending but the brutal reality is you can’t always make it in time, although having everyone witness Rick’s sacrifice makes it that much more powerful. He’s been with most of these people since the beginning of the series and they are all there to witness his heroic end. It’s definitely a great way to end Rick’s story and if you’re going to die better to do it with a literal bang. But before anyone breaks out a tissues and mourns Rick Grimes there’s one final twist ahead.

Jadis/Anne (played by Pollyanna Mcintosh) contacts the people from the helicopter and after confirming she has an ‘A’ asks to be picked up. Anne hears over the radio what happened and spots Rick on the river bank injured but alive, the helicopter arrives and she declares she has a ‘B’ and asks them to save Rick. Rick wakes up in the helicopter with Anne as they head to an unknown location. The scene shifts to a group of people surrounded by walkers and losing the fight. Shots ring out and they run to the woods and see a young girl wearing Rick’s sheriff hat who identifies herself as Judith Grimes (played by Cailey Fleming).

Anne is finally going to wherever she’s been trying to get to and is taking a surprise guest; after teasing Rick’s death all season we get the ultimate twist where he survives. The only downside is because Rick is still leaving the show we’ll be stuck wondering where his story will go for who knows how long. But in the present (or technically future) life goes on and Judith is all grown up and rocking the sheriff’s hat. Such a significant time jump means we don’t’ get to see the immediate aftermath of Rick’s ‘death’ given he was such a significant person in their lives. But it should be a major story arc explored as we see how everyone has adjusted to a Rick free world.

“I came to kill Negan. And you’re already worse than dead. That settles it.”

If an explosion can’t kill Rick Grimes what can?

“It feels like its ending.” “Little things do end. But it’s not the end of everything.”

It’ll be fun to see how everyone changed and Judith is now an actual character.