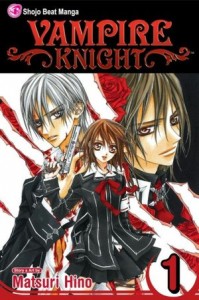 Vampire Knight is a manga written and drawn by Matsuri Hino.  It originally premiered in 2005 and is currently on-going.  It is a fantastical piece of shojo manga, although a two season 26 episode anime version has been made as well.

First off, Matsuri Hino’s art is fantastic.  Her style is very pretty to look at.  While reading it I found myself stopping to just look at the well crafted pictures.  Manga drawing styles can be a bit hit or miss but Vampire Knight presents a very…  romanticized style I would say, while still maintaining a realistic feel to it.  Most notably, her drawings of the main character, Yuki Cross, are incredible.  Yuki’s expressions and actions are just beautifully drawn.

Art aside, the story follows Yuki Cross and the mysterious Zero, who are the only two members of the school’s disciplinary committee.  Their main job is to keep the normal students in the day class away from those in the night class.  Yuki, Zero, and the headmaster are the only ones who know that all of the students in the night class are vampires.  There is an uneasy truce at the academy, an idea that came into being because of the headmaster, who wants vampires and humans to live in peace.  It’s up to Yuki and Zero to keep that from falling apart.

This story is intriguing to read.  The characters are well done, each one being distinct from the others.  Kuran Kaname is a pureblood vampire, the only one at the academy.  His relationship with Zero is one of the most interesting for me.  This mutual hate respect that neither will admit is fascinating to read.  Yuki and Zero’s relationship is probably my favorite.  There is the mystery to Zero, and Yuki’s desire to break down his walls and get close to him.  Her desire to help him clashing with his desire to be left alone lends itself to some wonderful moments, which Matsuri Hino’s art is able to capture flawlessly.

Vampire Knight reads extremely quickly, (like most manga) and it keeps my attention at all times.  There is never a dull moment or a point where I don’t care what’s happening.  The story brings a certain tension between the humans and vampires and doesn’t drop it throughout the entire story.  I would recommend it to any manga  or vampire fans.  If you don’t enjoy reading, check out the anime version, which I enjoyed as well.