Following its mediocre predecessor, The Huntsman: Winter’s War has amped up the cast list in the hopes of luring fans this April. The trailer was released by Universal Pictures this week. Take a look.

After the lackluster success of Snow White and the Huntsman and the disastrous public relations disaster that was director Rupert Sanders cheating on his wife with lead actress Kristen Stewart, who was also in a high-profile relationship, it seemed like the studio would not move forward with the planned sequel. However, both Sanders and Stewart were booted and the movie has become more focused on Charlize Theron and Chris Hemsworth’s characters from the previous installment.

Emily Blunt joins the cast as the Ice Queen Freya who seeks vengeance against her evil sister, Ravenna (Theron) after she kills her daughter once learning she will no longer be the fairest in the land. Freya enlists the help of young children and turns them into hardened fighters including the Huntsman (Hemsworth), though banishes him once she learns he has fallen in love with another warrior in her army, played by Jessica Chastain. It’s sure to be a dark, twisted and mystical fight to the death. 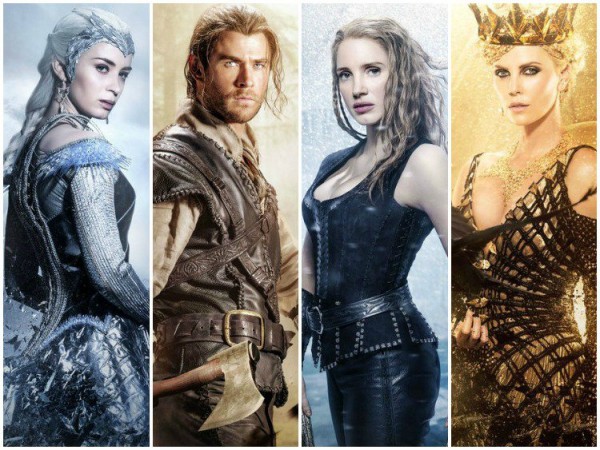 The additions to the cast are certainly intriguing. Theron, Blunt, Chastain and Hemsworth are headliners in their own right and seeing them together on screen will be a treat. Also joining the big names are The Hunger Games’ Sam Claflin, Merlin’s Colin Morgan and from the great Cornetto Trilogy, Nick Frost.

The trailer promises a lot of action, CGI and the swaying of Hemsworth’s luscious locks. The film was directed by former Snow White and the Huntsman visual effects specialist Cedric Nicolas-Troyan and the screenplay was written by Craig Mazin, Evan Spiliotopoulos and Frank Darabont. You can pick sides for the Winter’s War when the film is released on April 22nd.

If you enjoyed Carly’s hunt, you can find the rest of her work right HERE on Sci-Fi Bloggers. You can also follow her on Twitter @MrsCarlyRodgers.