It’s been awhile since we’ve seen any new footage from Zach Snyder’s Batman v Superman: Dawn of Justice. After a leaked teaser and an underwhelming official trailer now comes the might-show-a-little-too-much trailer. Check out trailer number two which debuted on Jimmy Kimmel Live this week.

It seems that Clark Kent and Bruce Wayne don’t like one another right from the get-go and Lex Luther can’t stir the pot enough. It seems as though the two superheroes don’t agree on what is generally acceptable heroic behavior. Batman thinks the otherworldly hero needs to be kept in check because he poses a massive threat to humankind, but Superman thinks Batman just might be another thug in Gotham. All Lex sees is an opportunity to pit the two against each other while plotting a way to gain power over Metropolis.

The trailer has garnered a fair amount of criticism for showing too much. The trailer does sort of lay out the film in, potentially, chronological order by showing the meeting of two powers and the establishment of their conflict, the major action sequences that occur because of that conflict and the eventual resolution of the two coming together to take on a greater threat alongside Gal Gadot’s Wonder Woman. To be fair, we know there will be a Justice League film so if you thought Batman and Superman were actually going to kill each other then you’re not really paying much attention. Another big complaint is the way Jesse Eisenberg plays Lex Luthor. Eisenberg’s character is eccentric and twisted and a little more like Jim Carrey’s Riddler than the classic Luthor. Then we saw the big bad… The rumors are trumors, you guys, Doomsday is here. Also, is Batman holding a gun?! Would you have liked to see less? 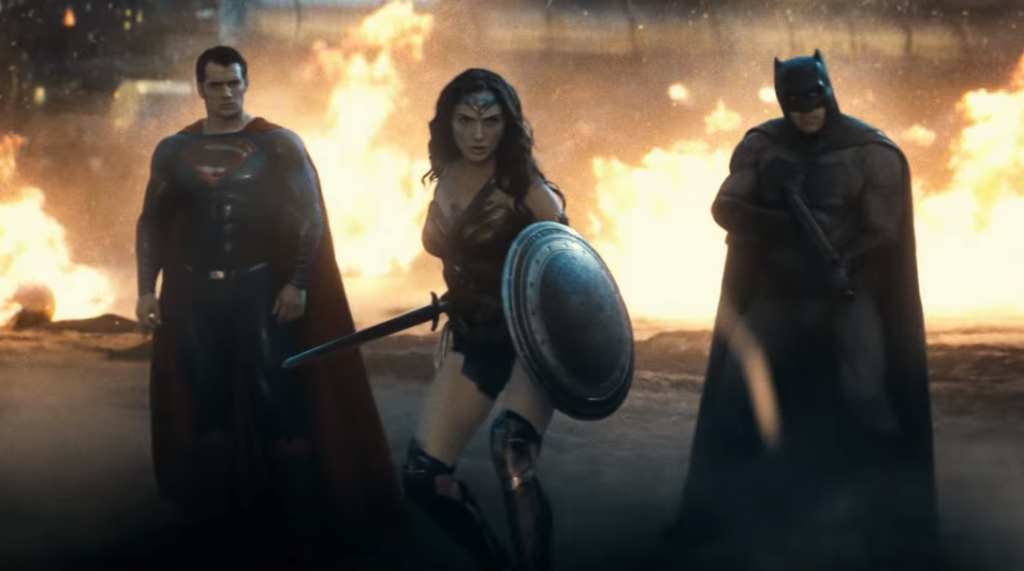 A few things were left to the imagination like Aquaman, The Flash and Cyborg and their appearances and it’s likely that Snyder, hopefully, left some killer action sequences out of the teaser.

It’s still a fun couple of minutes of DC action and the shot of the three heroes amidst dust and destruction was all kinds of awesome. It will be interesting to see how the trio battles Doomsday and what kind of set up we will see for Justice League: Part One set for release on November 17th, 2017.

If you enjoyed Carly’s reasonable assessment of a TERRIBLE TRAILER (uh…yeah…Editor here…yeah…), you can find the rest of her work right HERE on Sci-Fi Bloggers. You can also follow her on Twitter @MrsCarlyRodgers.