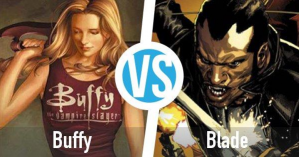 As soon as I said it, you know who you thought would win. If you know the stories, that is. For some it might just be a geeky fighting mash up, but for my wife, my friends Adam and Ren, and I, it has become an intelligent symposium at the best of times and a heated shouting match at others.

It started out innocently enough. My wife Amanda had never seen the Blade movies, so my friends Adam and Ren came over one evening to join us as we started to make our way through all three. Now, being an avid fan of Buffy the Vampire Slayer, Amanda began pointing out the differences between the two slayers, and ended up stating that she thought Buffy was the better of the two.

And it was on.

Adam, who’d never got into BtVS as a child (or an adult, like I did), pitted himself against the three of us. He was pro Blade, you see.

The debate heated up quickly. The efficiency of each slayer was discussed at length. Strength and stamina were stacked up side-by-side for comparison. Who would look better in a chunky heel was not discussed, but everyone was thinking about it, I’m sure.

Silver, garlic, sunlight (whether or not the sunlight in BtVS had anything to do with UV light as it did in Blade, with a more magical or demon-related alternative for the sunlight’s effect being proposed), we discussed it all. Blade’s sword. Mr. Pointy (Buffy’s stake). How well Blade would do in Buffy’s world. How well Buffy would do in Blade’s world with and without Blade’s weapons.

And then, as often enough happens, it led to deeper waters. We discussed the internet’s treatment of this very question, and the implications. Do so many people on the internet think Blade would win because he’s, essentially, a man (I’m just going to call this right now…Buffy, Blade, and Gender Equality, coming soon to a college campus near you!)? I don’t think any of us thought that, but you should read some of the comments out there. Sexist, vulgar comments that have no place in a civilized, geeky discussion. Trollish comments about how Buffy couldn’t win, because she was a woman and her place was…you guessed it…in the kitchen.

Deeper still we delved as we discussed the psychology of vampires and the effects of stepping into another fandom’s universe. The mortal dread that still, despite their immortality, plagues vampires about dying and about the afterlife was discussed. Many of the vampires in both worlds are seen fleeing to save themselves and stave off coming face-to-face with those big questions. Would something come over Blade if he were to step into Buffy’s ‘verse? Would that mortal dread fill him as he entered a universe entirely different from his own, wherein to die would actually mean, as a demon, entering into some kind of tortured hell (just like Angel did when he died after getting his soul….oh, whoops, SPOILERS!).

We floated around in the shallow end again for a while, of course. Comparing arbitrary stats and comparing the comic book vs. movie adaptations of each of the characters, but it seemed to come down to three things: an overall draw in the competition between them, a deeper appreciation for both of the characters, and, ultimately, an increased appreciation for the participants in said debate.

Because that’s what’s so great about science fiction and fantasy. They draw you in with their immersive worlds, awesome characters, and general bad-ass-edness. And once you’re drawn in, they lead you, spellbound, into conversations with other watchers, readers; with other fans. With other Trekkers, with other Rebels. With other wizards and witches, still waiting on their acceptance letters.

And once we’re together, sure we’ll argue, but it’s really for love. A mutual love of awesome things. Isn’t that what it’s all about?

What are some of your most hotly-debated issues in science fiction or fantasy fandom? Comment below, and fight it out amongst yourselves!

Image source can be found here .

This piece was written by our contributor and author Collin Pearman. His novel, A Timeless Abandon, was reviewed by our site and is available online today.