When I attend comic cons, I try my best to plan my way into panels but I always hit the artists alley and creator’s booths. My comics pull list may be a wee bit eclectic—some superhero, some supernatural, some that defy genres—but the consistent elements are a good story and a distinct artistic style. And I love me some comics art. My current lack of empty wall space attests to this fact.

When I went to NYCC last fall and saw Rogan Josh’s work, under the name modHero, I quickly became a fan. Even months later, I really wanted to know more about this artist’s strong aesthetic sense and love of superheroes. That same man was kind enough to agree to an informal interview via email.

B.K.: I really like your modHero byline (“A design experiment  overcome with fanboy hormones and ret-conned into ‘Art.’”), but could you give us a bit more on your origin story? What was it that finally spurred you on to make your first portrait/piece of a superhero art?

J.S.: I had been a graphic designer for many years, doing pretty standard corporate stuff while designing rock posters and creating comics and zines in my spare time. I had always loved superhero comics and had read them since forever, but had never really tried working in that genre, partially because breaking in to the field of mainstream comics seemed really daunting, and partially because my formal training at school was in more traditional artmaking (not sequential art or illustration) and the skills I’d build as a graphic designer didn’t really seem to apply. 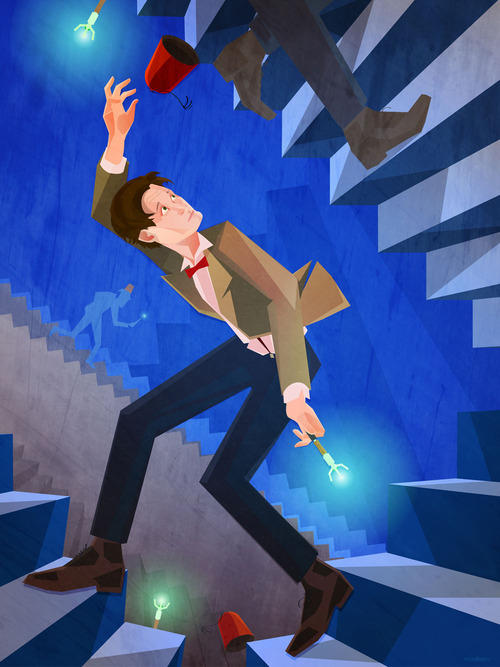 A few years ago, when the economy was really bad, I was out of work, zoning out on the internet a lot. I was impressed by artists making fan posters for their favorite films using a minimalist approach. I wanted to try something similar, but wasn’t sure what to do. I’m not that big a film buff. I do, however have a vast, and heretofore useless wealth of knowledge about comics. So, I put it to work. At first, I figured I would make holiday gifts for friends. Then, maybe sell a couple on Etsy. I had no idea that I’d still be doing this, hundreds of prints later.

On the tech/process side, I also approached the series as away to get comfortable with Adobe Illustrator as an art-making tool. I had used it for years as a design tool, but wanted to practice with it creatively and develop my illustration skills.

B.K.: You have some great group pictures, especially of the X-Men, but for the most part you do portraits. What is it about single character portraits that interests you?

J.S.: Well, the big group ones take forever, so I can only crank out so many!  At best, I try to depict a character in a way that puts you in a moment with them. With a group scene, it’s so much noisier. It ends up being more like posing action figures (which is totally fun) but I find it harder to make it feel poignant. So, because of that and the time they take, I’ve shied away from them. 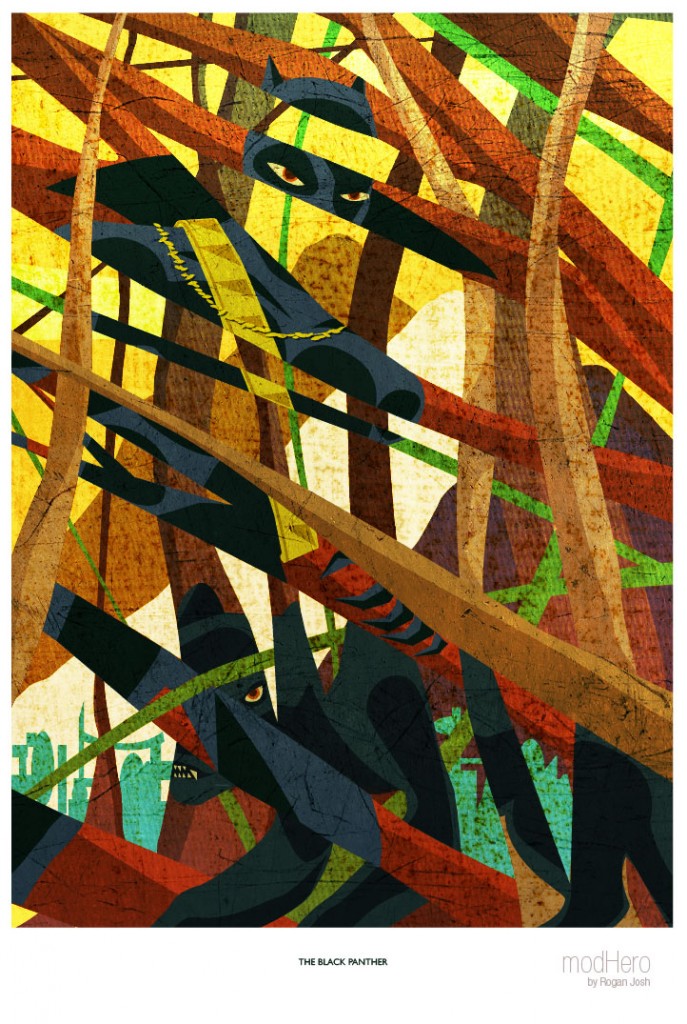 B.K.: I think your work always seems simple/iconic and emotional at the same time. And unlike the work of someone like Bruce Timm or Darwyn Cooke, your art seems current rather than iconic and nostalgic. Is that part of a specific aesthetic that you really wanted to express? What would you say are the main influences on your art style? Who are your artist heroes?

J.S.: I’m amused by nostalgic art, and as much as I acknowledge that I’m drawing from the work of some amazing mid-century graphic artists, I never really wanted modHero stuff to feel retro. I’m way more excited by art from my lifetime and the mashing up of styles and processes.

Outside of comics, I find inspiration all over the place: abstract expressionists, ancient tribal art, outsider art, science shows. There’s a show at the Met now of Italian painter Piero della Francesca, who painted in the mid-1400s. I walked into the gallery accidentally and thought it was amazing. The best inspiration comes from things I’m not expecting. 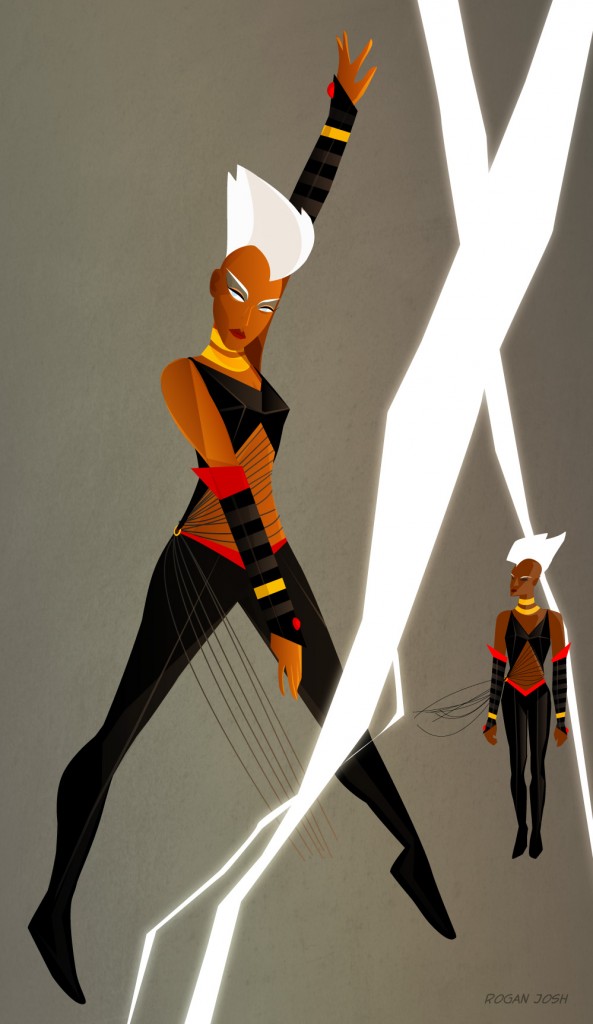 B.K.: What’s your process when you design/create one of your pieces? How long does it usually take?

J.S.: An idea comes to mind (usually in the shower), a certain graphic approach to drawing a character, some way of showing a cool moment in an interesting way.  I will probably let it roll around in my head a while. I start in Illustrator with a rough blocky sketch and just build it out from there.

A thousand tweaks later (a couple days, off and on) I may have something I’m happy with. If not, I put it aside and come back to it in little intervals while I work on something new. If you’ve ever worked with vector art, you probably know that if you aren’t that interested in what you’re doing it can be super-boring. So unless it is time-sensitive, I can put a piece away for months at a time before wrapping it up in a way that I’m satisfied with.

B.K.:  Any interest in making sequential art of your own?

J.S.: I’m actually about to wrap up a ten-page story I wrote and drew for the upcoming Sentinels anthology. Sentinels is an epic indie superhero story published in large volumes about ten years ago, written by Rich Bernatovech and drawn by Luciano Vecchio, who is now working for DC. The main story arc is done, but fans have clamored for more, so this will be the second anthology showing stories in the world they created. 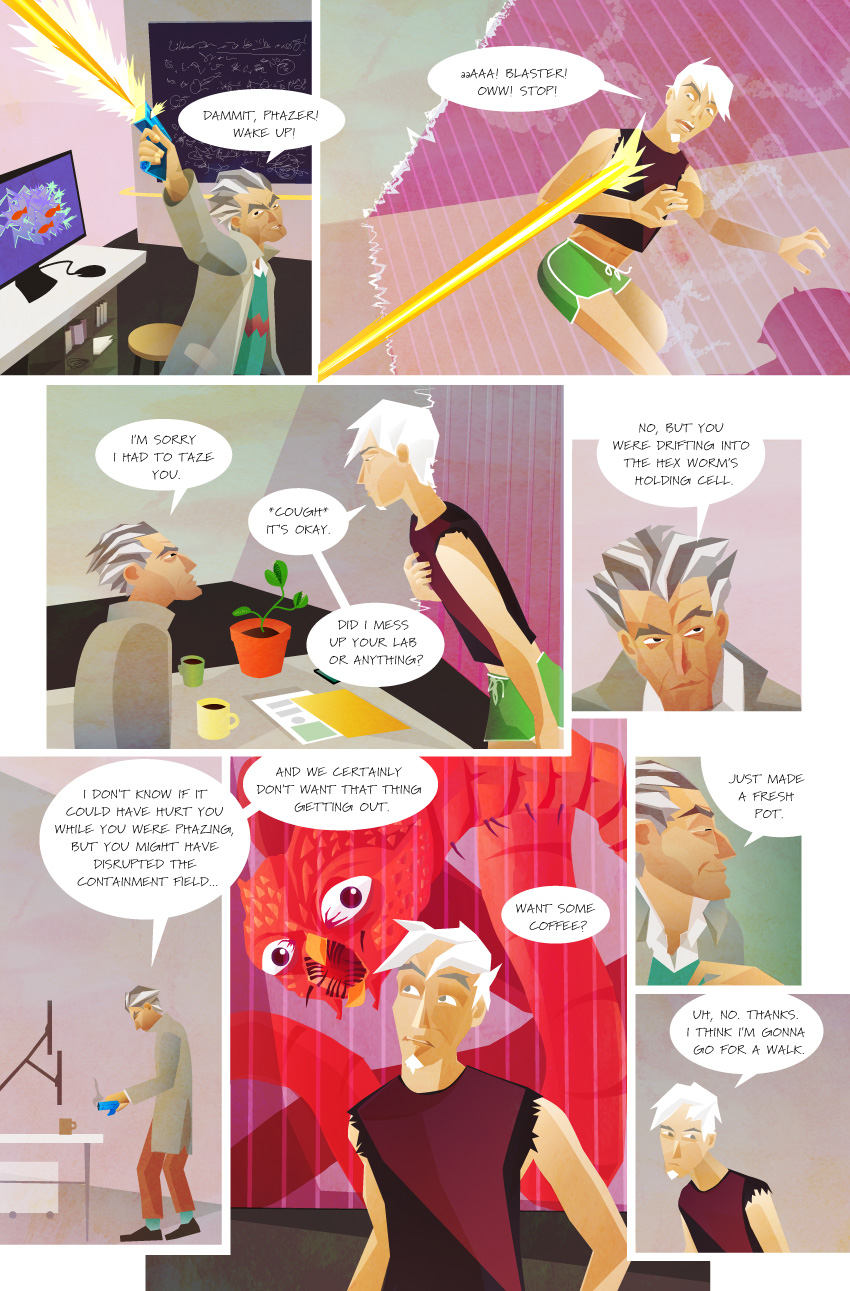 A sneak peek at Siegel’s piece for the upcoming Sentinels anthology.

This was the first time I did anything sequential using the modHero vector style. It was fun, but took me much longer than I expected. I don’t have anything sequential lined up once Sentinels is done, but I hope to do more in the future, if just to get better and faster at it. There are some big stories I have kicking around that I’d love to draw, but I should probably focus on some shorter strips and vignettes, so I can be more likely to finish what I start as I get better at the process.

B.K.: Do you have a favorite character? Anyone who you would like to redesign if you had the chance?

J.S.: Rogue is probably my favorite character, Nightcrawler and Kitty Pryde tying for second. They could all use a visual refresh, in my opinion, Kitty especially. Good lord, her iconic look is effective but so boring. As a kid, I LOVED her because she changed outfits so often, and her pre-Excalibur outfit was petty solid. I’d love to see a return to that direction for her look.

I’m relieved Rogue has moved past the canary yellow tights, but a dour, shapeless green hoodie just isn’t a good look on anybody. I miss her being kind of raw and punk.

Nightcrawler pretty much always looks great, but I do wish he could get an updated look now that he’s back in the books. Slapping an X on the classic costume was pretty terrible, so hopefully that won’t come back. I could go on about X-Men costumes for a pretty embarrassingly long time… 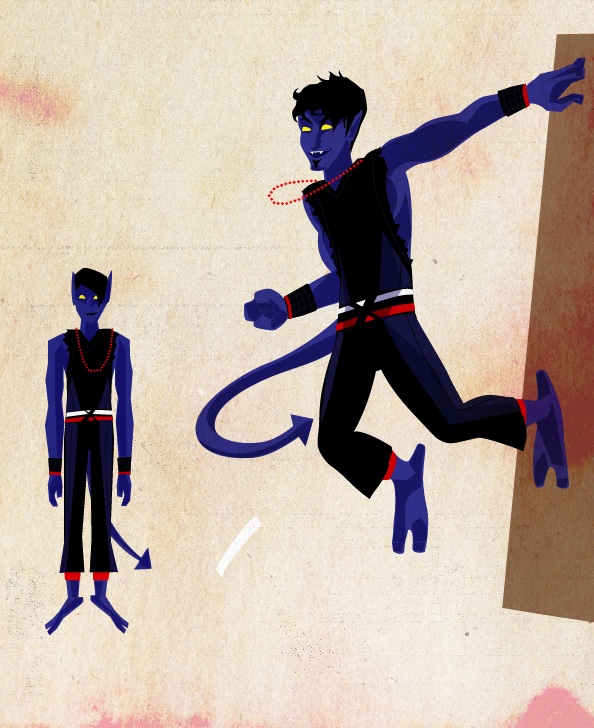 I’ve actually been toying with some costume designs for the X-Men, just for fun. I haven’t shown them to anybody. [But of course he shared some with us! -B.K.] I also just finished an infographic of all the variations of the X-Men’s standard uniform, just to underscore my obsession with what fictional characters are wearing.

B.K.: I know there are student artists who look up to you and other artists like you. Any advice for them?

J.S.: Try to challenge the medium you work in. Use it for unintended purposes. Develop your own techniques. Go to museums as often as you can.

Make art socially. I am part of a group who draws at a bar every week. It’s been good for all of us.

[As] I mentioned earlier, at least at first, as you develop your approach to what you are doing [it’s important to start] things that you know you can finish.

Do what you love, even if it’s sort of dorky and maybe [considered] uncool. 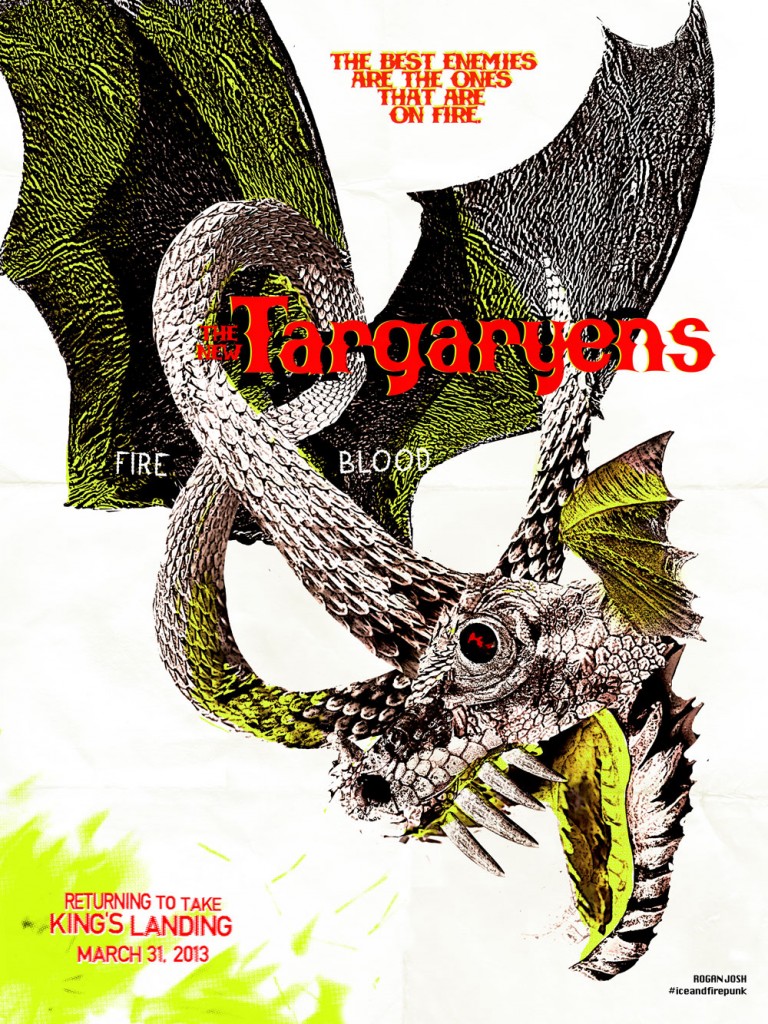 The Targaryen punk poster by Siegel.

I just finished up my Close Encounters series, which is sort of a niche personal project, but I’m super happy with it. I’d like to turn it into an Ebook with poems and sounds by my friend Vic Thrill, who inspired the series. I’m designing a book for my friend, concept artist Sean Andrew Murray, and an album cover for the band Wormburner, who I’ve worked with for years. 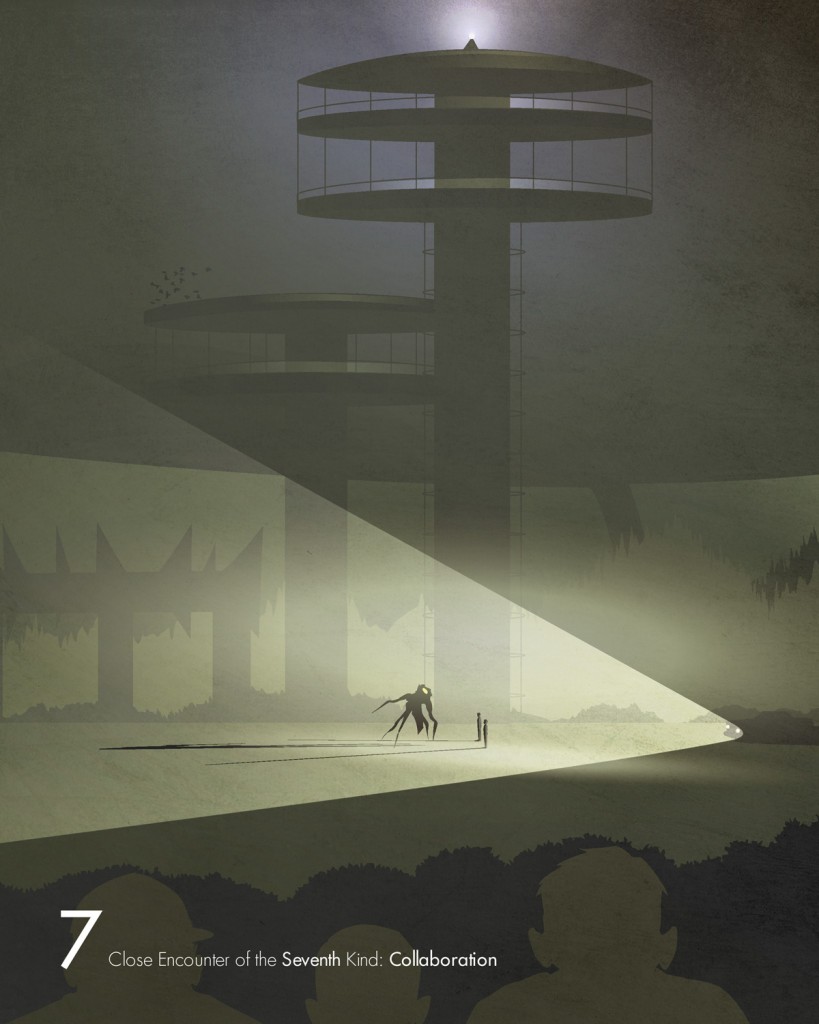 I also help run the group Geeks OUT, and we are having our annual fundraiser art party May 29th. We’ve had two previous tribute shows honoring George Takei and Sigourney Weaver. This year, were paying tribute to Sir Ian McKellen!  All are welcome to submit a piece for the show. I need to get working on mine! It’s going to be a lot of fun.

To learn more about the cool stuff mentioned in this interview, check out some of these links!