This Sub-Genre Seems To Be Working Out Well

Between Kipo and The Last Kids on Earth, the child-friendly apocalypse has become a subgenre. But that’s not a bad thing, especially when both shows have been stellar.

But there’s a major difference between these series. Kipo has childish aspects to it, sure, but it is—oddly—more grounded in its depictions of a ruined world. There’s a hard to quantify aspect to The Last Kids on Earth I only noticed by the presence of its inverse.

And that inverse holds it back. The Last Kids on Earth has a case of serious tonal whiplash. Characters openly acknowledge when they almost die. They point out often that the world is dangerous. Yet, they still do phenomenally dumb and risky things. The show tries to justify this by stating the main character is actively trying to make things light, and everyone is a teenager…but still…they should own the concept of the show more. The Last Kids on Earth has an absurdly dark plot—that’s just how it is. Its weakest parts are when the creators try to prevent the implications from sinking in too much. Video game references and iconography annoyingly attempt to distract from how many people died by this premise. The horror is simply downplayed to the point of it breaking immersion. 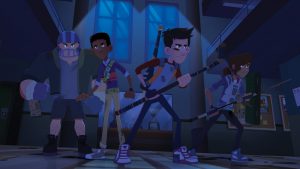 The Last Kids on Earth Ignores Itself To Entertain

This even applies to the characters in a roundabout way. They can’t be in real danger. So, most are super-powered, even if they don’t say they are. The inventions made by the nerdy character are ridiculous, and the tough guy is inhumanly strong—he rips doors out of walls.

But what this does positively for the show is make everything energetic and snappy. The pacing is great here. It’s never too slow, but also not too frantic like Glitch Techs. There are moments of a breezy and fun style to the danger, while still having it being treated seriously—kind of like later seasons of Buffy. It’s also a little like if Codename: Kids Next Door was made into a post-apocalyptic series.

The Last Kids on Earth Will Keep You Entertained

And, continuing with the positive aspects, there’s the cast. The characters are all a stereotype, but they are stereotypes with a great sense of camaraderie and snark. Quint, for instance, maybe a stock nerdy character, but he’s also not shy or reserved—instead being the heart and capable even without backup. But the standout character is not who I expected. Weirdly, the ex-bully Dirk steals the show. He’s somehow the deadpan, level-headed one. Dirk delivers some of the best lines and is consistently funny.

The show using all it has effectively is its best feature—both with characters and situations. It takes stock zombie tropes and plays with them in fascinating ways. And this same mindset applies to the animation. Because, yes, the show looks like it was done in the same flash-animation that something like 6teen used, but it never looks cheap. The Last Kids on Earth manages a lot of fluid movement, and a sense of speed that makes the many scenes of car chases and running feel exciting. They can’t do gore, but there’s a sense of impact and splatter. This can be unnecessarily used for gross-out aspects, but it’s often just another way to keep the energy up.

And that’s why you should watch The Last Kids on Earth—for the energy. It’s a series with a strange, heightened world of little real violence, and yet extreme destruction and frenetic bombast. If I was still ten years old, this would have been one of my favorite shows. 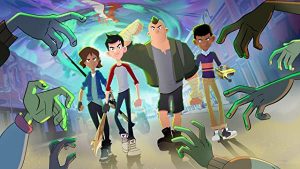