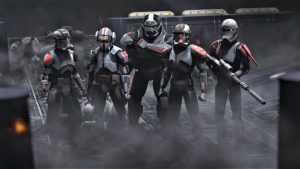 The Bad Batch Works Mostly As A New TV Series

As far as I can tell, The Bad Batch is essentially more Clone Wars. The voice actors, the animation style, it’s all being reused. The only major difference is focusing on a classic five-man band of special clone troopers.

Which begs the real question: does that mean those who haven’t seen the Clone Wars cartoon cannot enjoy The Bad Batch? Well, thankfully, no. And that’s for one major reason: that Star Wars makes for good war stories.

I realize that may seem obvious, but Star Wars as a franchise has always had a lot to do with the Jedi and their plights, rather than the bigger conflicts. We see war scenes play out (and they’re often great scenes) but they usually pull away after a few choice moments. This is a big reason Rogue One is a better movie than its given credit. Star Wars has always had an awesome array of weapons and vehicles. The Clone Wars series often allowed showcases of these in more varied applications. When no one can deflect them, blasters become quite fun weapons.

The Bad Batch understands this and uses it to great effect. The first episode shows entertaining and interesting tactical and sharpshooting trickery, along with teamwork. Its combination of combatants makes for visceral and interesting scenes.

Sadly, though, we also must contend with the characters doing the shooting, and here is where things go awry. As stated earlier, we have the classic setup of leader, smart guy, explosives/tough guy, and sniper, along with a cyborg wildcard character to round out the roster. They’re likable enough in their roles (I for one love some of the scientist character’s quips) but they are rather flat and stick to their preset stereotypes.

Another issue is they seem to be trying to make lightning strike twice. The Mandalorian showed a big tough guy protecting a smaller innocent character across action set-pieces is a recipe for heart, but The Bad Batch plays it too much the same. It may be because the resident young and impressionable Omega is not overwhelmingly interesting—or nearly as charming. Her personality is a curious and precocious child, with a hint of mystery, and that’s just not enough. It’s textbook and flatly done. Even if it was the first time Disney had pulled this trick, it’s badly done.

However, there’s one storytelling choice that carries this show to higher levels. And that’s setting it directly after Order 66. I haven’t seen/read enough extended Star Wars lore to know if they’ve covered the rise of the Empire from a microscale view before, but it makes for a fascinating point in the timeline. Seeing how characters we associate with the good side turn into murderers and oppressors and mindless drones to their ingrained conditioning is a tone shift I can get behind. Every time the budding Empire comes up in the background, it adds yet more flavor. It allows for even deeper, more intense war stories.

So, at the end of the day, we have a show that doesn’t require much knowledge of the Clone Wars show—at least so far—but does require general Star Wars knowledge. If you haven’t at least seen the movies, there may be some entertainment to gleam, but it will be surface-level stuff. The action and dialog are solid. The settings and machines look cool and varied. The characters are sometimes endearing if predictable. But for those engrained in the fandom and wanting more history and background between the movies—or who just like blaster fights—it’s a show worthy of a half-hour watch each week. Clone Wars has shown it can do mature and morally gray war stories, and I must imagine The Bad Batch will prove a vehicle for the same.