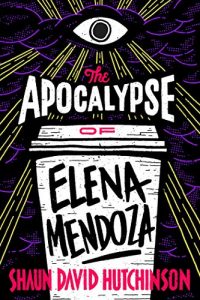 The Apocalypse of Elena Mendoza Fails To Armaggedon

For a book supposedly about the end of the world, The Apocalypse of Elena Mendoza doesn’t seem to want to focus very much on the actual end of the world. It seems content to deal with mundane moments of growing up and overcoming problems, and while that’s fine in a lot of stories, it’s not why I bought it.

Where in other contemporary novels having to move to a new place or a breakup would be the inciting incident for the character having an emotional crisis, this one decided to throw in the gimmick of someone being able to heal a dying girl.

And, I want to make this very clear: I’m fine with a contemporary teen romance novel. I’ve read a ton of them, and they can be good—but this is supposed to be a sci-fi/fantasy novel about the end of all things! They pay lip service to it, sure, a lot of talks about people disappearing and massive destruction happening off-camera, but it almost never even hits the main character’s location. I get that the novel wants to create some degree of uncertainty about what’s happening, some level of not sitting too hard on an action story—but it’s so low stakes as to simply be a waste of the idea.

And then there’s the theme of the novel. The book actually has some moments of pretty stellar moral choices, and the rules and magic/science (it’s never made fully clear which it is) and even the descriptions of how it works are fascinating, but boy does the author want to hammer you with philosophizing. It’s got the same issue as anime of bludgeoning the audience with the same concept, told the same way, repeatedly. Chapters come to a screeching halt to have the main character talk about her lack of decision making, both to herself and to other characters. And though the concept comes to a smart result, almost none of the talks come to any new conclusions. I get this book is for younger audiences than me, teenagers and such, but the swearing and somewhat explicit references to sex suggest to me that the book was written for someone who doesn’t need the idea spelled out the same way so many times.

The Apocalypse of Elena Mendoza Is So Repetitive 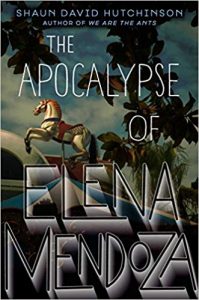 But—and this is the next question you might wonder—how does it fare as a romance novel? Like, except a few times, it’s botched itself as a serious fantasy/sci-fi story, but at least it can be a decent teenage romance novel—and thankfully it’s that. The interplay of the characters is fun and dynamic, and even certain antagonists get a level of nuance to them that’s fun to see. Well, except the squad of popular girls who are somehow irredeemably evil—because that’s not a tired trope, at all.

If my ragging on it wasn’t clear, I’m not sure I can recommend this book. I did devour it, but I feel like that’s only because it dragged me along, and I was chasing something I never was going to properly get. The concept, initially, was fascinating, and there are a few moments of pathos and human understanding that were incredibly powerful and important to younger readers to hear/read, but the presentation is bloated. It did not need to be over four hundred pages, and The Apocalypse of Elena Mendoza suffers so much because of it.