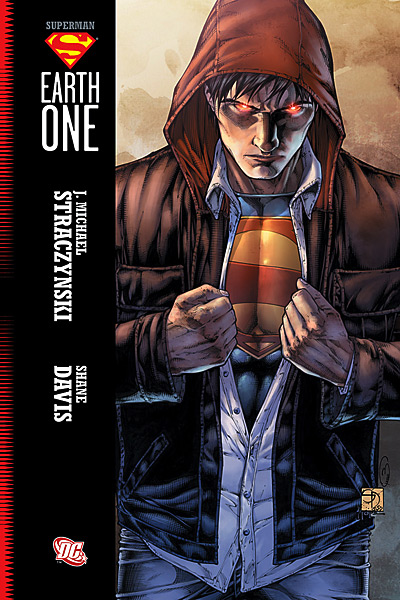 In the comic book dictionary, the terms “reboot” and “retconning” refer to the process of adding or subtracting details from character history. Reboots “modernize” characters to better fit changing times and connect with new generations of readers. The Superman: Earth One graphic novel (penned by legendary artist J. Michael Straczynski) is the latest result of such a connection.

The novel isn’t exactly an origin story. Instead, Clark’s at a crossroads. He’s trying to find a place in a world where he can do anything he wants. His abilities virtually guarantee him a future in the field of his choosing. Everything he could ever want is there for the taking. Even so, his father’s last wish haunts him. Using his powers for humanity is noble, but Clark doesn’t want the responsibility. His attempts of athletic stardom and top-tier scientific discovery are the backdrop for a man desperately wanting to fit in, instead of being outside looking in. Clark’s heart-to-heart with his father’s tombstone lends emotional impact to his dilemma.

Unfortunately, the choice is taken away from him.

A chance encounter with an alien metal triggers the dormant spaceship it’s a part of. The vessel–fulfilling the science fiction tradition of military forces and the otherworldly artifacts they hoard–activates a beacon for another alien ship.

Suddenly an alien armada appears in the sky. Their leader, Tyrell, demands the last Kryptonian survivor, and they’re not above slaughtering the planet to get him. Clark has an epiphany. All his life he’s been doing everything in his power to appear normal. But it’s not just about him now. People are in danger because of him. He can’t sit idly by. He has to do something.

He has to be Superman.

But for the story to have credibility, there has to be an enemy able to keep up with Superman. Tyrell not only fits the bill, but brings in an incredible change in the Superman mythos.

Krypton did not explode. It was destroyed by Tyrell’s species. Every twenty years, Krypton and Dheron (Tyrell’s homeworld) would meet, battle, and retreat. Neither side could destroy the other…until a mysterious benefactor gave Dheron a technological edge. Krypton dies not by its own hand but in the fires of war.

Clark risks everything to beat Tyrell. Victory is hollow, however. To the world at large, this man is a god who could vaporize the planet on a whim. The people cheer…and their leaders are afraid.

If this sounds like the plot of Man of Steel, it’s because this novel was its inspiration. Instead of a Superman all “Truth, Justice and the American Way,” Straczynski presented a more human Clark Kent, sharing the same uncertainties that haunt us mere mortals. If you ask me, he’s the better for it.

If you enjoyed Michael’s truth and justice, you can find the rest of his work right HERE on Sci-Fi Bloggers. You may also check out his personal blog over HERE.