I am so, so pleasantly surprised with Supergirl. The new show from CBS has been advertised on every surface, both physical and technological, since the beginning of the summer and on some of those ads were the classic hateful comments from the hoards of trolls who hide behind their computer screens and their skepticism. I wanted it to be good. I wanted a leading female representation of a superhero to find an audience and success.

Here’s the thing: the show did phenomenally well. The pilot episode, which aired on October 26th, tied for the highest-rated new show premiere of the Fall, alongside NBC’s Blindspot. The episode was written by Arrow and The Flash co-creators Greg Berlanti and Andrew Kreisberg as well as Allison Adler and follows the formula of their previous successes. 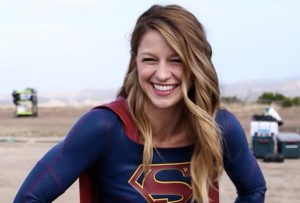 Melissa Benoist is incredibly lovable. As Superman’s cousin, Kara Zor-El, she deals with relatable issues like terrible bosses and bad dates, but she’s also dealing with problems concerning her superhuman powers. Kara spent her life in Superman’s shadow and now she would like some attention. When her adopted sister, Alex (Chyler Leigh), is in danger, she decides that this is her chance to let her own powers shine.

The pilot isn’t perfect, and rarely are they ever, but it’s an excellent establishment of character. Kara is struggling to stay normal, but her family wants her to stay safe. Also, casting Dean Cain as her father is amazing. The man is known for playing Superman in the 90s and its a fitting nod to fans. Anyway, she also deals with news reporters blaming her for damage to the city and trying to find a costume that isn’t restricting. Supporting characters like Kara’s friend, Winn, played by Jeremy Jordan, and her egotistical boss, Calista Flockhart’s Cat Grant, are also fun to watch. There’s no skimping on the action either. There’s plenty to be seen and assuming the show will follow its CW predecessors, there’s more to be shown.

Hopefully Supergirl’s ratings will continue to soar as high as she can.

If you enjoyed Carly’s surprise, you can find the rest of her work right HERE on Sci-Fi Bloggers. You can also follow her on Twitter @MrsCarlyRodgers.