Now I’m not exactly sure what was going through the head of the developers when this game is created. When you think of Godzilla, what comes to mind? Destruction? For sure. Giant monsters? Definitely. MAYHEM? For sure. What about blue dots slowly traveling from one side of a Microsoft excel like grid map to the other? Not so much. 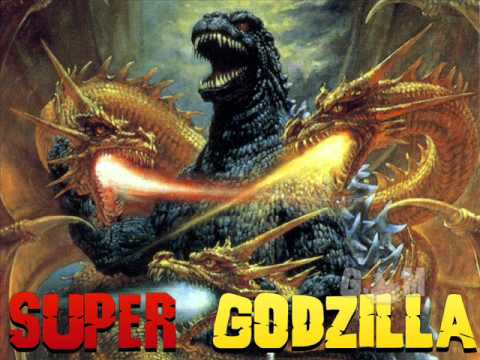 But lo and behold, that is exactly what players experience for the majority of their time playing Super Godzilla. Various cities and landscapes are displayed on the bottom half of the screen in a grid, with little buildings symbolized as gray squares, tanks represented by green squares, and the Big G himself starring as a blue dot. The top portion of the screen simply displays Godzilla walking, and occasionally crashing into a building, acting according to whatever his blue dot self on the bottom half of the screen is up to. 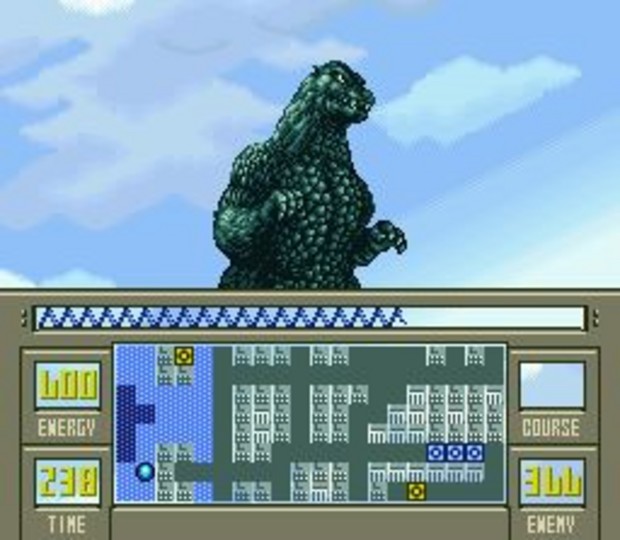 This is what you spend most of your time in Super Godzilla doing.

Now I’m going to cut the developers a little slack. Godzilla is a hard property to translate into video game form (though you wouldn’t think so.) Few Godzilla games nail the right formula. The most successful of these have been the more recent fighting games like Godzilla Destroy All Monsters Melee. This wasn’t exactly possible on the Super Nintendo, but a 2D fighter was. What’s really sad about this whole story though, is that they tried – and failed miserably.

Does it not seem obvious that the best genre for Godzilla would be a fighting game? Back in the old 16 bit days, 2D fighters were incredibly popular, a trend I’m assuming the developers (kind of) realized. But instead of making a kick-ass 2D Godzilla fighting game, we are given a strange hybrid of grid combat mixed with the strangest 2D fighting system I have ever encountered. 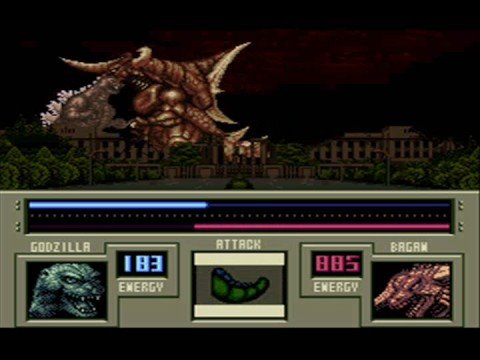 Godzilla locked in battle with the new monster Bagan.

Once blue dot Godzilla hunts down and finds pink dot enemy monster, the game warps to an incredibly strange fighting game system where they actually get to play as Godzilla himself. Players have one attack – punch. After successfully landing a punch, the player must move Godzilla backwards to unlock a special attack. The further back Godzilla walks, the more powerful the attack. After quickly selecting the special ability, players are then treated to an anime like cutscene showing Godzilla firing his atomic breath or tail-whipping whatever monster is currently being fought. That is all. Punch. Backup. Rinse and repeat. No action or combos, simply press two buttons, literally, and you win.

Of course I played this game when I was like 7, so I still have fond memories of it, and even play it from time to time. The story is actually fairly well done (for a Godzilla plot) and even introduces a monster villain to the franchise a never seen before the games release or since. It can be beaten easily in less than 4 hours, and of course must be done in one sitting. It’s only now that I realize what a poor representation of Godzilla this game is, but also just how strange the gameplay is. I have never played anything like it since, and I can only hope that I never will.