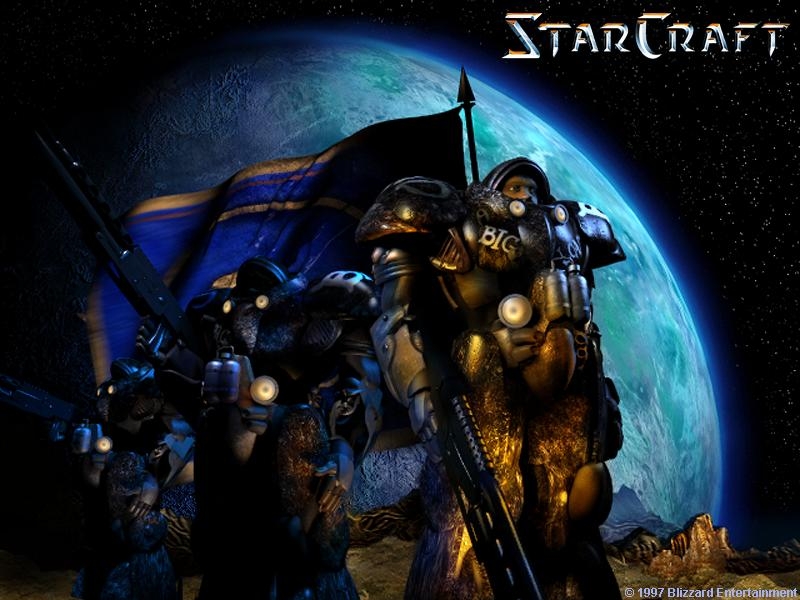 Starcraft was orignally released in 1998.  This game has  become an incredibly popular classic, causing the release of the sequel, Starcraft 2 to sell over 721,000 copies in the first few days of its release.  Starcraft is an RTS game.  RTS means Real Time Strategy, which focuses on building and base, training units and moving those units around the game map to defeat your enemies, all in real time.

Starcraft is known for being a balanced game, so that no matter which race you choose to play (Terran, Zerg, or Protoss) you have an equal chance of winning.  This means that victory comes down to skill.  Starcraft is, due to these reasons, a difficult game.  Especially the first one these days, if the servers are still up (I haven’t checked) you’re only going to be playing against extremely talented opponents.

Starcraft’s three races are each unique and a lot of fun to play as.  The Terran are the human race, fielding both cheap, weak marines, and large heavy vehicles.  The Terrans are very proficient against turtle enemies, or anyone who plays defensively, due to their siege tanks and Battlecruisers long range destructive weaponry.  Mostly, the Terrans end up fielding a lot of powerful vehicles, supported by hordes of marines.

The Protoss are a sophisticated alien race that has equipped its units with shields.  Each Protoss unit is very powerful, but also expensive, with a long build time.  The Protoss field powerful ground units such as High Templars with the incredible Psionic Storm ability, and Archons.  The Carrier is a floating fortress that launches up to eight small fighters.  These airships are incredibly powerful, which offsets their cost.  Mostly, the Protoss field smaller, but more effective armies than the other two races, utilizing tough ground units with powerful air support.

The Zerg are the opposite of the Protoss.  Their units are weak, but very cheap to produce.  Zerg aims to overrun the opposition with hordes of cheap units, such as the Zergling.  Supporting these tiny, cheap units with stronger units like Hydralisks is very effective.  The Zerg also have access to powerful air units like the Devourer and Guardian.  The Lurker is a powerful defensive unit and the Ultralisk is a massive behemoth that can absorb a lot of punishment before going down.  Overrunning the enemy with massive groups of mixed units is what Zerg is all about.

In game, you manage your workers, who can collect one of two resources for you.  The first is minerals, and the second is vespene gas.  Together, these two are what you use to build buildings, research technologies and upgrades, and recruit new units.  You have to try and spend at all times so that you are constantly at the strongest you can be.  Expanding to new mineral fields as quickly as possible is also extremely important.  Obviously you will be able to build more if you have access to more resources.

Starcraft is a very fast paced game, where a lot of players have their build orders planned out to the second, if not the milisecond.  However, even playing against the computer can be a strategically rewarding experience and this game is worth checking out just for all of the hype it caused.  I suggest watching game play videos.  Watching them will give you a good sense of what the game is about and you will know right away whether it’s for you or not.  For example, if you are a turtle player, do not get this game, you won’t like it.  Starcraft is a great game with a lot of history and it’s a lot of fun to play.  Starcraft II only improves the experience, so  I would highly recommend checking it out.