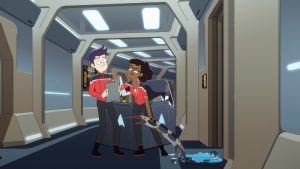 Lower Decks Has Yet To Make Me Laugh

The biggest issue with Lower Decks is that it’s not funny. Not at all. And, for a series supposed to be a comedy, that’s a brutal failure. You can tell where the show is supposed to be funny, where it intends to make you laugh, but it falls flat every time.

A little kid might find this funny, or at least amusing, but the show is also not for little kids. It has swearing, gore, drinking, and oddly sexual moments.

So, who is this show for? Well, it’s not a terrible addition to the Star Trek universe. Yeah, the references and callbacks are jarringly in your face and navel-gazing, but the first episode is at least competent structurally. The plot is paced fine—if a little rushed at the end.

And that persists to the characters. 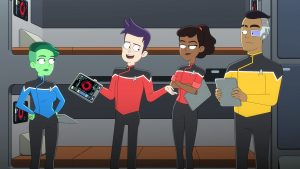 Lower Decks Gets Something At Least Half-Right

We’ve got two out of four good ones. Our main two are, sadly, not the good half. Mariner is obnoxious, grating, and breaks the usual style of how people talk in Star Trek. I’m not extremely familiar with the overall franchise—but I’m pretty sure rapid slang and hyper-casual chatter are not how anyone talks in this future. The voice actress is fine, this is just atrocious dialog.

Conversely, Boimler is not annoying to listen to, but is not interesting as a character. He matches his wet blanket stereotype too well and becomes forgettable. He’s mostly just the butt of jokes—and there are no good jokes.

It’s the other two where things shine. Tendi is endearing by design. She’s eccentric in a way sure to make her a fan favorite. Then, there’s the best character: Rutherford. He’s just so much good storytelling potential in one character. A new cyborg who is both a cheesy romantic and yet so obsessed with technology aboard the ship he ruins a romantic moment? That’s great! Sure, the punchline for that realization was flat, but that’s still fun as a character trait. It’s different. I want more of him. He and Tendi might also be a future couple—which is just adorable. 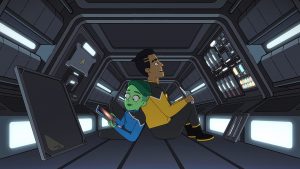 Wrapping up, let’s talk about how the show looks. The animation, when it’s not being used for stupid jokes or weird sexualization, is passable. The action scenes are a little too busy (the show often has too much happening in the background), but they are exciting and fluid enough. The character designs are very Rick and Morty if less deliberately sloppy looking but are expressive and dynamic.

If you wanted a version of Star Trek that can more regularly have unique alien designs, monster attacks, and slapstick violence, animation works well enough.

However, even with my mild praise, I would expect nothing special from Lower Decks. They need a lot of new, interesting ideas to succeed—and they don’t seem to have them. Either the comedy needs a massive upgrade, or the story requires more focus. The first episode might be a fluke, but I can’t see it getting much better without something jarring. 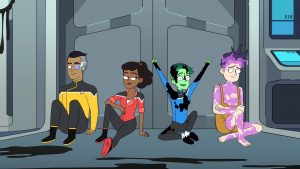