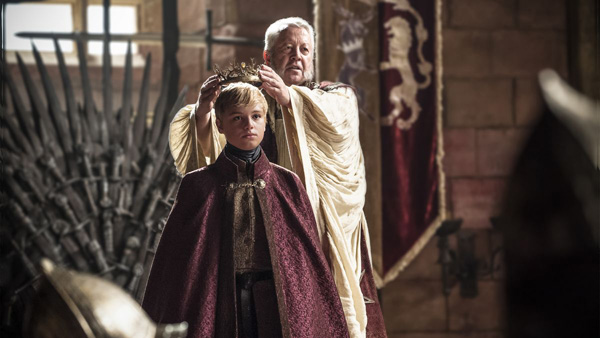 “First of His Name” has brought us to the halfway mark of the fourth season of Game of Thrones. We open with Tommen’s crowning, seeing our new king (now with more blonde!) making nervous eyes over at Margaery, who then has a nice little chat with everyone’s favorite queen regent. “I won’t even know what to call you. Sister? Or mother?”

We spend a short check-in with Daenerys, who is told of Joffery’s demise before learning that the cities she liberated previously are picking up the pieces and returning to their old ways. Jorah Mormont, ever the faithful counselor, suggests to leave Slaver’s Bay behind and sail for Westeros. Big surprise, she ignores his advice and decides to stick around Meereen and rule like a real queen.

Sansa and Petyr arrive at the Eyrie where fragile, little Robert (or rather Robin, in the show’s case) doesn’t stray far from the breasts of his mother, Lysa. He seems quite excited for a glass bird that Petyr brought him before making it “fly” out of the Moon Door, giving Sansa an example of what he would have done to her husband, Tyrion (if mummy hadn’t said “no”). Lysa then gives her big reveal that Jon Arryn (the former Hand of the King) had in fact not been poisoned by the Lannisters, but that she herself had done the deed. She’d done just as Petyr had instructed her, and wrote a letter to Catelyn claiming that the Lannisters had been behind the poisoning. This revelation cannot be stressed enough. If Jon Arryn had never been killed, Ned would have never come to King’s Landing and the Starks would have never been involved in the mess of the crown. (And, who knows? Jon might have handled Cersei’s unfaithfulness a little less honorably.) True to her word, after she and Petyr are married, Lysa lets the whole castle know how well her lungs work. All. Night.

Tywin Lannister admits to his only daughter, Cersei, that their family is not only broke but owes a “tremendous” debt to the Iron Bank of Braavos. A Lannister always pays his debts. Cersei and Oberyn take a walk through the garden where Cersei asks about her daughter, Myrcella, who was shipped off to Dorne in season two. In this scene, Lena Headey really shines. While watching, I could really feel her genuine pain for the loss of her only daughter, now a whole world away.

Arya still does her “prayer list” every night before bed–including her dramatic final name, “the Hound.” The Hound finds her working on her “dancing lessons” the next morning, where we finally get a mention of our beloved Syrio, whose fate is still uncertain. In true Hound fashion, he teases Arya about her former mentor until she attempts to stab him. She really wasn’t counting on that thick armor, and the Hound knocks her down. Not to worry, if the Hound took every attempted assassination personally, Arya’s storyline would have ended ages ago.

Meanwhile, back at the Eyrie, Lysa and Sansa are having a happy trip down memory lane discussing her mother, Catelyn, and her love of sweet things. Lysa turns very abruptly into a jealous psycho, accusing Sansa and Petyr of having relations. Sansa uses her mad defense skills and convinces Lysa that she is, in fact, a maiden and would never lie to her crazy aunt. Lysa flips that insane switch off like a light and comforts her niece. Her words of encouragement? One day she’ll marry her cousin Robertin (couldn’t decide) and be the Lady of the Vale. Eugh.

Locke is quietly checking out Craster’s Keep, counting the men and searching for Bran on his own agenda. He returns to the brothers and informs them that there are only eleven men and no one keeping watch. He then tells Jon that there’s a hut that they should stay away from–a hut that contains his little brother, Bran. While the fighting starts, Locke grabs Bran and tries to escape, but Bran wargs into Hodor and busts right out of his chains. The Incredible Hulking Hodor breaks Locke’s neck (yes! I knew that he was completely dispensable) and is off to free Jojen and Meera. I’m reminded of the Red Wedding, as Bran and Jon almost have the reunion that never was, before it’s decided that Bran’s journey will not be able to continue if he stops to say “hello.”

Burn Gorman (from Torchwood) plays Karl, who shows us why he was a “fooking legend” with knives while he goes face to face with Jon. Karl then gets distracted by one of Craster’s wives/daughters where it was pretty obvious that Jon would finish him off then. I WAS NOT expecting a sword through the head that protruded from his open mouth! 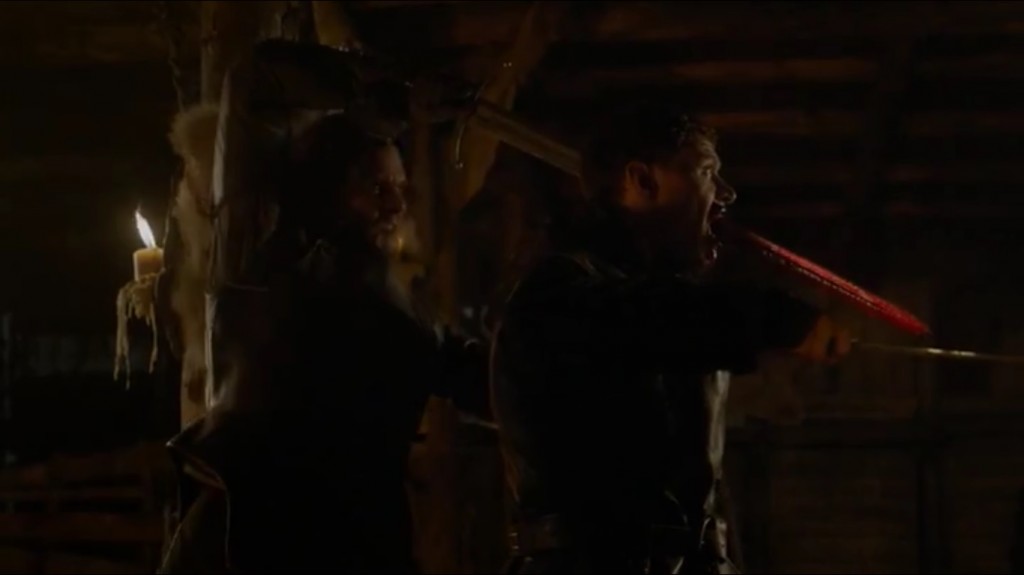 As the last of the mutineers are taken care of, Rast escapes – only to be taken down by my favorite dire wolf, Ghost. The best reunion of the whole show takes place next when Jon and Ghost come together once more. Jon then invites the women of Craster’s to come with them, but they refuse, telling the men to “burn it to the ground, and all the dead with it.” 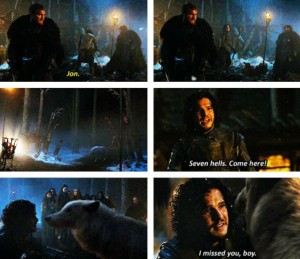