The speed of light, at which time travel becomes theoretically possible…

Thus opens 300,000 kilometres/seconde, a French, sci-fi short film by Stéphane Réthoré. This film has many things going for it: Paris, really cool clocks, a great 1950s noir vibe, and an ending that makes you want more.

As you can see from the trailer, inventor Lucien Lacroix seems to be involved in developing a time travel device. From the scene we see of him working with tiny clockwork, you can probably also guess that the device might be a timepiece that does a bit more than just tell time. This alone is a simple but satisfying concept. Time travel is always fun to play with, and I like the idea of a time machine that is essentially a super complex watch. It’s a sensible design, but complicated enough that we appreciate the specialized knowledge needed to make it. I also liked that the film’s score includes ticking clocks in the background, as a layer underneath the accompanying music. It helped to increase the tension in certain places. 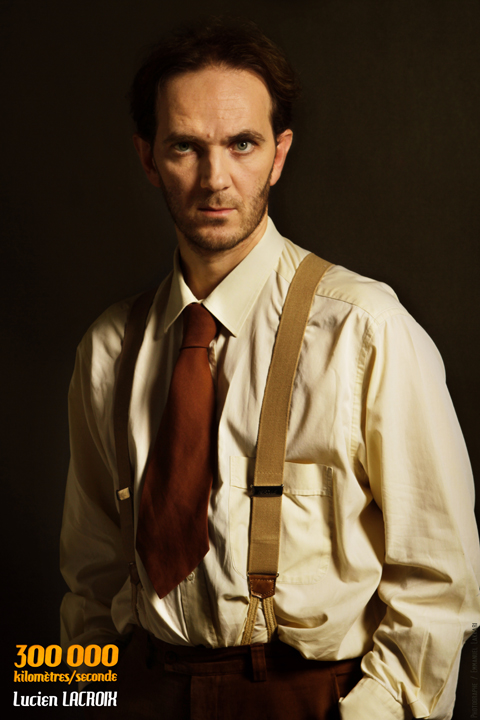 Of course Lacroix is not the only one interested in time travel, and he soon encounters a shadowy Organization that seems bent on finding his creation. Lacroix’s conflict with the man from the Organization, without going into too much detail, forms the core of the film. The conversation between the two men is well played, but I found myself wondering what Lacroix’s exact position was. I couldn’t figure out if his life was really in danger or if in the end the Organization needed his knowledge. While I know that for short films time is a serious consideration, I wanted to know more about the faceless Organization—since those sort of societies have the risk of being quite interchangeable. If I knew precisely what they stood for or wanted, perhaps that would have been enough. For example, if it seemed like the Organization truly needed a time machine for some task, then their potential grasp on Lacroix would seem more threatening.

The ending of the film relies on the moxie of its protagonist, an admirable thing upon which to depend in terms of storytelling. Lacroix’s daring decision, and where it lands him, also serves to slightly expand on what we know of the Organization. What the film shows us in those last few minutes sets up the next part of the story as well.
From what we know of how stories work, we can guess that whatever Lacroix’s path ends up being, he will encounter the Organization again.

If the filmmakers were only concerned with bringing Lacroix to the point of making that pivotal decision then they did well. But in terms of the story I wanted to see, we get solid a set-up and a first foray into the conflict, but then the movie seems to end right after its mid-point. The majority of the film (which is in its entirety about 18 minutes long) seems like set-up for what is to come. In its current form this almost seems like a flaw, but if the plans to continue the story come to pass then all should be well. The filmmakers do a good job of giving us enough information to fill in the next few pieces, and it is a credit to the filmmakers if, like me, you want the story to continue.