In celebration of Disney’s Star Wars Weekends, we’re releasing Retro Reviews of the original Star Wars movies! Stick around all weekend as we take you on a journey through your favorite trilogy!

What: A space opera that almost defined  the genre as we know it and one of the biggest sci-fi films of its era, it beat the original Star Trek film into theaters by two years and won thousands of fans. The story is one of a farm boy on a desert planet who is dragged into an intergalactic conflict that has been raging for generations—and involves him far more personally that he realizes. Along with his mentor, a bravado-filled smuggler and a mysterious, whip-smart princess, the farm boy sets off on an adventure that will change the galaxy forever.

The trio try working together for the first time. It mostly succeeds.

Where: Set in a galaxy far, far away that audiences had never seen before, and filmed in various locations such as Mexico, Tunisia (Tatooine), Guatemala (Moon of Yavin) and sound studios in England.

When: The year was 1977. Nobody knew what a lightsaber was, or the difference between an X-wing and a TIE fighter. At that point, George Lucas had directed THX 1138 and American Graffiti (in which Harrison Ford had a part). Aside from Alec Guinness and Peter Cushing, the cast of Star Wars were all relative newbies. Close Encounters of the Third Kind was released a few months after Star Wars, but films like Star Trek: The Motion Picture, Mad Max, Alien, and Superman were all a few years in the future. Star Wars was something that people had never seen before in terms of SFX and world building. 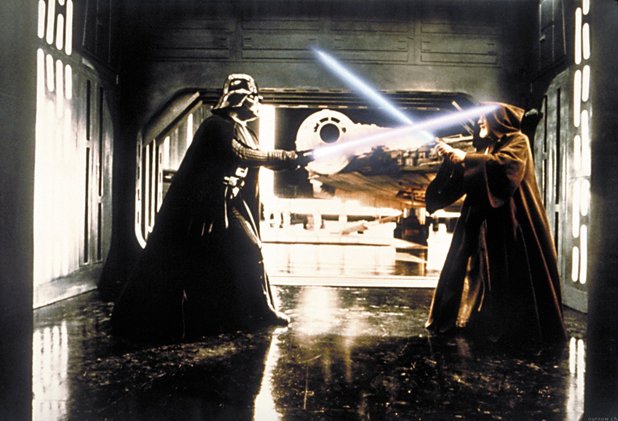 The first lightsaber duel ever was a slow affair compared to later ones, but it’s still the stuff of Hollywood and sci-fi history.

Why You Should Watch It: When it comes to space opera, you can’t get much better than Star Wars. A New Hope in particular—as the origin story—is well plotted and well paced. Luke Skywalker is a generally likable, if a little naive, protagonist, and his fresh-faced attitude contrasts well with Han Solo’s cynicism and Princess Leia’s no-nonsense attitude.

The often dusty, lived-in locales, intriguing technology and specialized ships are all well-designed. And the special effects were, for their time, quite impressive. Want some numbers as proof? A New Hope won five Oscars in design, as well as the Golden Globe and BAFTA for John Williams’ unforgettable score. First and foremost, this is a fun ride of a film.

Why You Could Maybe Skip It: The reason why everyone can to some extent read so many theories and worldviews into Star Wars as a series is that Lucas dealt in archetypes and the ages-old hero’s journey. He gave it his own flavor and built an impressive world around its basics, but essentially he was just smart in picking what pieces he wanted to play with. That being said, unless you really dislike sci-fi as a genre, or have a phobia of spaceship travel or droids, one would be hard-pressed to come up with a really good reason why you shouldn’t at least watch A New Hope once.