The Thing (1982) from Universal Pictures

What: After bringing us Halloween (1978) and before directing Big Trouble in Little China (1986), Carpenter created this compact film that comfortably straddles the line between sci-fi and horror. With a cast of only 14 people (plus half a dozen sled dogs), Carpenter made great use of the Antarctic isolation to up the stakes in the hunt for a deadly alien.

Where: While actually filmed mostly in Canada, with a few bits of Alaska, the film is set in Antarctica at a US National Science Institute research base.

When: Interestingly enough, while the film is set in the winter of 1982, it was released in June of 1982. Way to just barely set it in the future, Mr. Carpenter.

Why You Should Watch It: The highlights of this oldie are definitely the various superbly disgusting iterations of The Thing, the claustrophobic tension of the science station setting, the terrific amount of flamethrower and dynamite usage, and how concise and no-nonsense the plot is.

Why You Could Maybe Skip It: If you’re not a fan of blood and gore and dogs being absorbed by aliens, then maybe you should pass on this one. I’m not joking when I say the SFX are nasty. This came six years after Ridley Scott’s Alien, so they knew how to burst things from people’s chests and then some. It’s a fast-paced film, but that also means that sometimes you might not feel like everything has been explained properly. It should also be noted that there are zero female characters in this film, so if you’re looking for great women characters you won’t find any here. 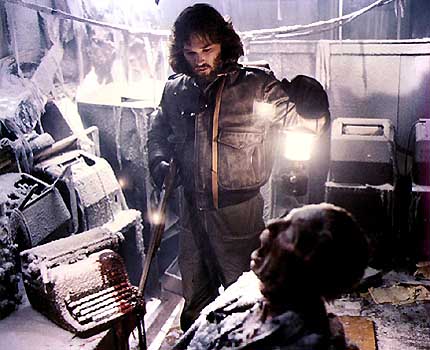 Mac (Kurt Russell) discovers the first of many bodies.

A Taste of What You’re in For:
It’s no spoiler that this is a movie about an alien trying to survive on earth.  Even before the flashy title screen, Carpenter gives us an opening shot from outer space of a giant flying saucer flying toward earth. After the title, the film begins with a pair of guys in a helicopter chasing after a sled dog and shooting at it. We then meet some of the dozen Americans at the science base. MacReady (Kurt Russell) is one of the two helicopter pilots that the base retains. We first see him drinking Jim Beam and playing chess with a computer. The computer beats him and he promptly fries its circuits with the rest of his drink. A straightforward kind of guy.
The helicopter, apparently Norwegian, circles the camp and lands. One guy jumps out, attempts to throw a grenade, drops it and blows up the helicopter and its pilot. He then yells incomprehensibly at the gathering Americans and shoots at the dog, which is currently licking an American crew member’s face. The Norwegian manages to miss the dog but shoot the American in the leg and then chases the dog into the camp. He is shot by the American commander, Garry, before he can get very far.

The Americans are understandably weirded out by this whole situation and MacReady, known as Mac, and the Doc are sent to the Norwegian camp to check things out. Meanwhile, their radio guy, Windows, tries to reach anyone out there to report the incident. And the dog creepily stares at people.

When the Doc and Mac reach the Norwegian camp, they find it dark and quiet. They investigate and find dead people, a large chunk of ice from which something was taken, some video records, and a half burnt grotesque humanoid creature. They bring the latter two items back to the American camp. The strong-stomached American medical staff dissect the half burnt creature and discover that it has normal human organs inside.

It’s not the Millennium Falcon, but you could have fooled me.

The dog keeper guy is told to put the mysterious stray dog in with the other sled dogs, because it has been wandering around free the whole afternoon and maybe even all night. (Special kudos to whoever trained this dog to act really creepy.) At first, when he puts it in with the other dogs, it just sits down and eerily stares at the wall. But, after a little while, it does something a heck of lot more messy.