Jim (played by Dean Norris) wants to put down Eva (played by Kylie Bunbury) after Julia (played by Rachelle Lefevre) tells the group how far along she is. Meanwhile, Barbie (played by Mike Vogel) tucks Eva into bed since she is due to give birth by the end of the day and her baby shows signs of not being human.

Barbie tells Joe (played by Colin Ford) to stall his progress on the device to keep the dome up long enough to cure the townspeople so the kinship doesn’t escape into the world. Junior (played by Alexander Koch) and two armed men nearly kill Julia and Jim before Aktaion soldiers kill them and Jim offers up Junior as the test subject for the cure. Hunter (played by Max Ehrich) learns that Lily’s (played by Gia Mantegna) father is still alive and that Hector (played by Eriq La Salle) lied. When confronted, he admits that Lily’s father is alive but “gone” and lost to the alien consciousness. Although Jim knows that the new cure they invented could harm or even kill Junior, he tells them to administer it and Junior soon runs a high fever. In an attempt to make Joe work faster, Christine (played by Marg Helgenberger) leads him into the woods and tells him that another alien race destroyed the kinship’s home planet. Those same aliens are coming to earth and the only way to stop them is for the kinship to escape the dome. Eva discovers Barbie is no longer in the kinship, but before she can raise an alarm she collapses from drugged tea Barbie gave her and he abducts her. 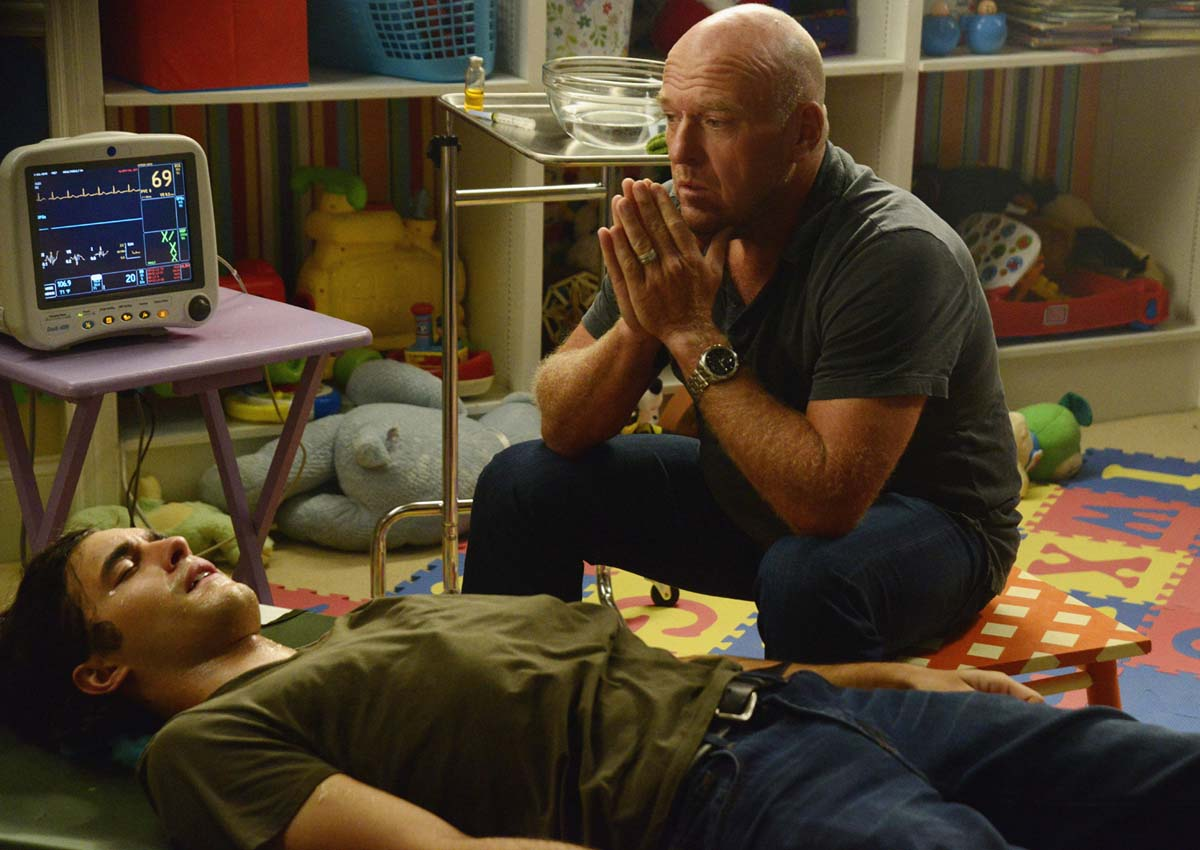 We’re going to fix you up.

Julia has a point that Jim is always quick to kill whenever there’s a problem but in this case that’s a great option. It’s a good thing Hector has someone he cares about who’s infected otherwise he wouldn’t bother with a cure; he’d go straight to genocide. Although the bigger concern is that someone related to the dome is an alien who could possibly escape and infect others. Joe took delaying his progress to heart. Jamming out to music in front of his guards was a really bold way to stick it to them. Now there’s a new piece of the aliens’ backstory where they were forced to run because another “evil” alien race attacked them. Although the idea of an alien turf war sounds amazing, I can’t bring myself to believe Christine’s story because she is known for making up lies to suit her needs. Not to mention the fact that this other alien race could be the good guys coming to earth to end the kinship. Barbie wants so badly to believe his child can be saved but the kinship’s pull is strong and if she’s born with it I don’t see any way to save her.

Barbie radios Julia when Eva goes into labor but since Jim and the others are wary of revealing their location, she meets him at the motel. After Sam (played by Eddie Cahill) tells Christine people have been doubting Barbie, she discovers Eva is gone and orders a massive search. Barbie refuses to abandon his baby because she is half human and he believes there’s a chance for her. Julia realizes that Eva is stalling the delivery, hoping Christine will find them first so Julia forces her to push and Eva delivers a healthy baby girl. Junior starts to show signs of improvement so Jim releases him, but once freed Junior attacks Jim and the other soldiers before he escapes. Eva asks Barbie to hold her daughter before Julia and Barbie take her but while feeding the baby Eva’s veins turn blue. Eva declares the baby is her queen and throws Barbie through the window, Julia and Barbie are forced to run when the kinship arrives. 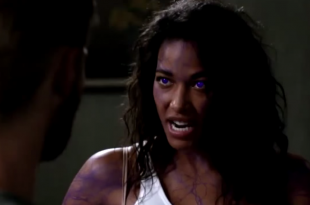 My baby is my queen!

Jim is getting softer these days. The old Jim would never have fallen for Junior’s act (or rather he wouldn’t have cared). My personal theory for why Junior is so into the kinship is because it allows him to embrace the inner crazy he used to have back in season one. I’m not sure what Julia was more upset about, helping her lover’s ex deliver his baby or helping deliver the alien queen who would bring their destruction. It was so cool how Julia pressed down on Eva’s stomach to force her to push and went badass midwife when Eva refused to do so, and you know she enjoyed hurting Eva. Now that the baby has Eva’s alien juice (I don’t know how else to describe it) inside her, I think it’s pretty clear Barbie’s daughter is lost. If there was any doubt the fact that Eva referred to her daughter as her queen made it clear the baby wasn’t human.

Hector and Jim talk and Hector tells Jim that since the cure isn’t going anywhere, they have to kill everyone who was infected, even people who have been seemingly cured. Lily overhears the conversation and tells Hunter and Norrie (played by Mackenzie Lintz). The baby takes the alien essence out of Eva and effectively cures her, since Eva is no longer needed, Christine smothers Eva while singing the baby a lullaby. Hector’s ready to cut his losses and kill everyone. I knew the evil corporate personality would eventually come out. Now that Barbie’s daughter is obviously an alien, he may have to resign himself to killing her to save humanity. But hopefully she’ll rapidly age first because, alien or not, few could bring themselves to kill a baby.

“We gotta put her down before that thing comes out.” “Why is that your solution to everything, killing the problem? I’m sure you like stepping on spiders too.”

With Eva’s death, I’ve noticed most of the main character deaths have been women. Is that a pattern or just a coincidence?

“You still think we want to be here, that we wanted to travel hundreds of thousands of light-years through a cold harsh vacuum, that we wanted to leave our home, our history, behind. Earth is a wonderful place, but it’s not that great.”

I notice that Hector and other Aktaion people never really say aliens. I wonder if they think it really is just a virus and are unaware there are aliens among them.

If you enjoyed Manny’s return to the Mill, you can find the rest of his work right HERE on Sci-Fi Bloggers. You can also follow him on Twitter @KN_Manny.