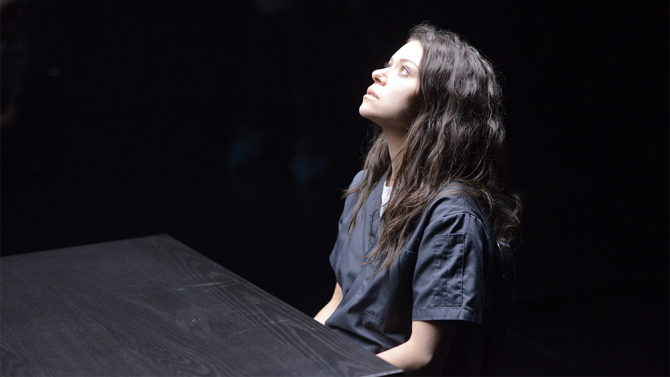 I walked into this episode like a soldier facing an alien invasion. I armed myself with a box of Kleenex, a bucket of popcorn, and an emergency cake to break open in case I became so overwhelmed with grief that I had to stuff my face. I dreaded sitting down to watch because there was this bittersweet feeling of an ending approaching, but here we are.

For starters, I’ll say that there isn’t a troll on this planet that could ever make me believe we’d finish off this season with Kira at Dyad. Almost as instantly as she was nabbed by Rachel’s slimy paws, I knew that by the end of the episode, she’d be back with Sarah. And she had damn well better be. Like most episodes in the season, it felt too fast, like there should’ve been more time, like they should’ve had a two-hour finale (like Once Upon a Time).

After knocking heads for letting Kira be taken in the first place, Sarah turns herself in to the Dyad, agreeing to let them have her eggs when she ovulates, TAKE OUT AN OVARY, and further down the line, impregnate her. Crap. 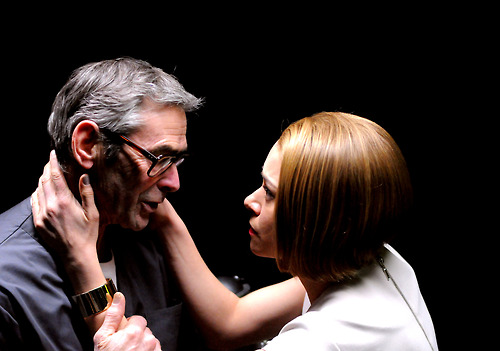 These Dyad people are no joke. Well, Leekie was definitely a joke, but there’s a new doctor in town, and Nealon is all business and serious face. Do not leave your children with this man. I suspect he will cut them open like a dead frog. Rachel also boots Delphine out of the picture fairly early and sets Dr. Nealon up as Cosima’s primary physician. I’m all right with this because Cophine can burn in flames (although I know it’ll be back next season), and it gives Cos the chance to see Kira by being cooperative with the change.

A master plan needs to be orchestrated to get Sarah and Kira out of Dyad’s clutches, so the Clone Club is on red alert! What I want to know is why didn’t they use their secret weapon? There’s no force greater than Helena, who we’ve seen do some pretty terribly amazing things and cheat death a few hundred-dozen times. I guess if she burst through the doors slicing and dicing, it’d kill all the suspense, huh? She spent most of the episode holed up at Art’s with Fe, recounting her adventures.

Meanwhile, other forces are in motion. Cos works hard with Scott to formulate their own breakout plan for Sarah. Go science! Through a very simplistic and adorable explanation of F=ma, Cos basically creates a killer pencil contraption. Ya see, this is why you need to stop sleeping in science class. 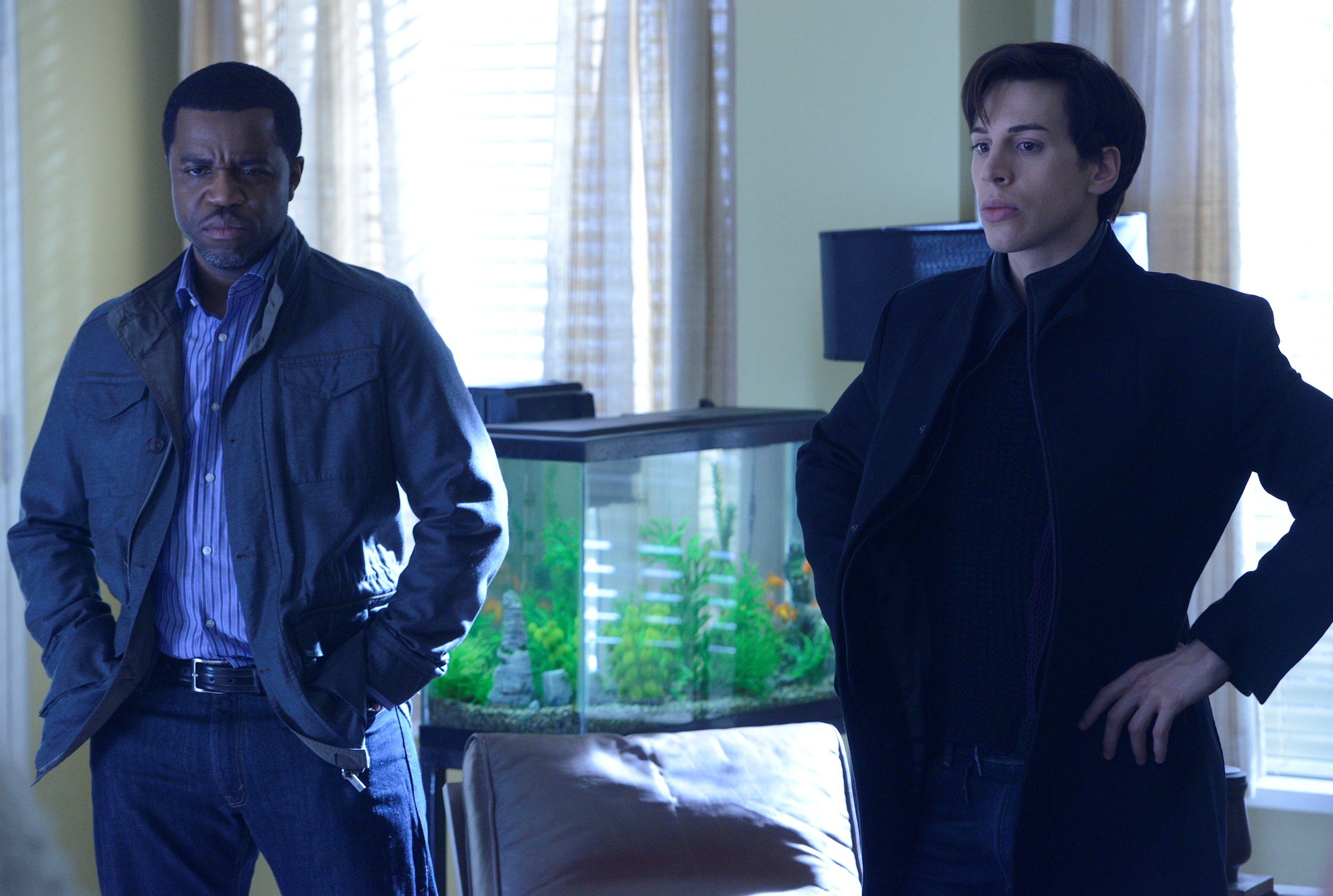 Rachel is a flaming pile of poo, but I feel bad for her. All that toughness is such a facade. She’s clearly a deeply hurt woman, but she does some really craptastic things. In a touching scene between her and Ethan Duncan (who’s now held in bondage like Sarah at Dyad), they watch videos of Rachel playing as a child. Rachel tries to coerce the doctor into giving her the sequence to allow Dyad to make more clones, but Ethan claims he’s memorized it and won’t tell. Rachel’s clearly pissed, but Ethan gets the last word. Drinking liquid from a tea bag laced with God knows what, Ethan calmly commits suicide, telling Rachel that she no longer deserves him. Well, she doesn’t. Things could’ve gone so differently if she wasn’t such a lying, impersonating, master-manipulating piece of snake. Now, she has no one—so she takes it out on Sarah.

In captivity, Kira yanks the cell of a nurse and phones her daddy! She asks Cal for help, sending him to find Mrs. S, and the two connect with an insider at Dyad who holds some power at the top of the pyramid. This opens a can of very greasy WTF noodles. Cal is able to set up a meeting with his mysterious contact, and Mrs. S sets up one with SexyPaul, striking a deal that will have a lot of people set on fire next season. 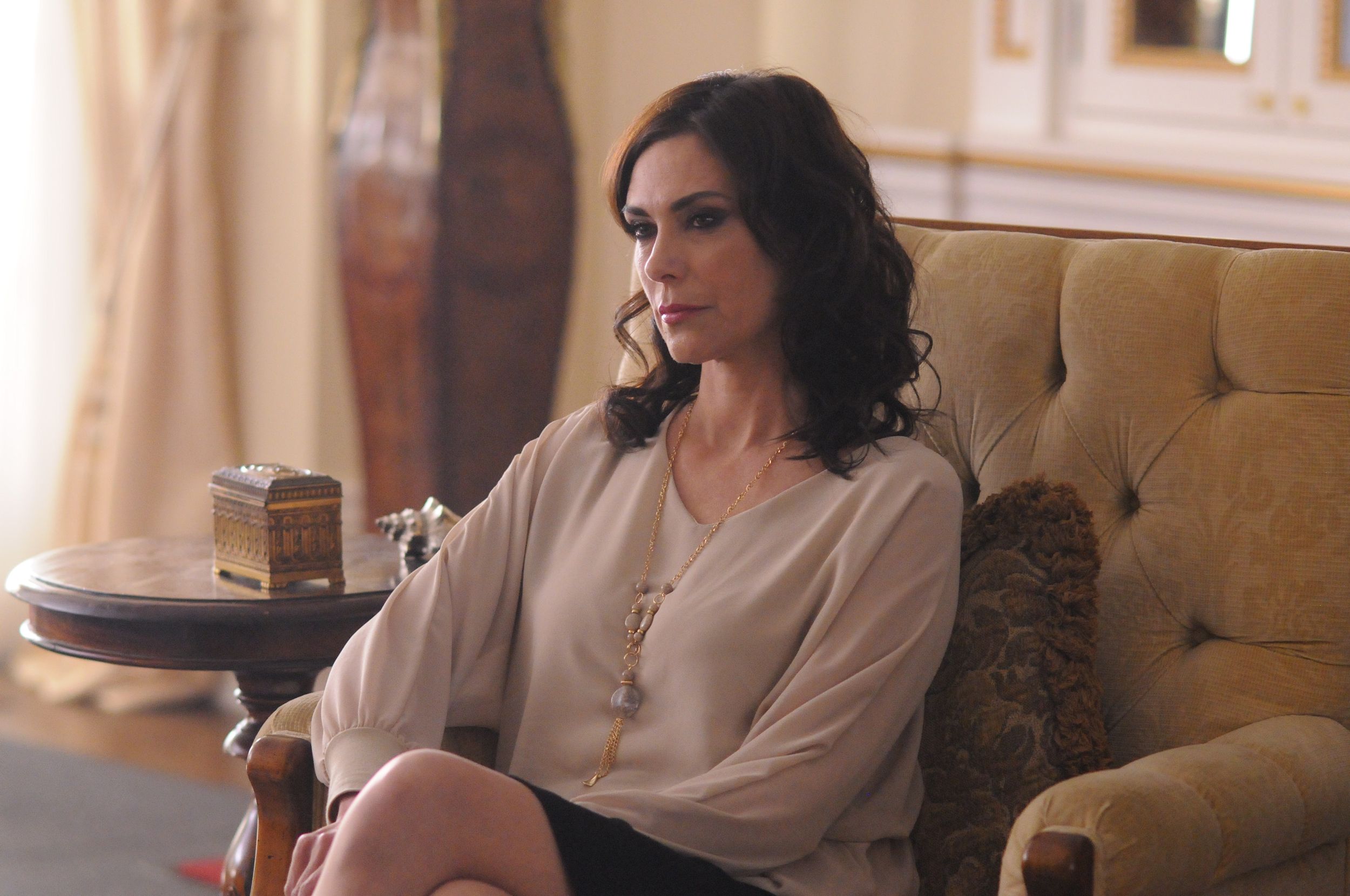 Can we stop to talk about SexyPaul? Can I just say YAS, yet…NO. So, apparently Paul is now a major in the army, and we get to see him don his full uniform. I think throughout the season, he’s been drifting into sketchy territory, but it’s clear that he still cares for Sarah (A LOT). Did you SEE that moment between him and Cal? Sorry, Paul, Sarah’s with Cal now. It also doesn’t help your case that he’s a definite member on Team Sarah (bo sketchy business) and less of a schmuck than you. Plus, he has the full weight of the Clone Club backing him up. It’s okay. Come into my arms.

Anyway, turns out, Cal’s been chatting with Marian Bowles, one of the Topside heads over Dyad. She promises to clear a safe passage out of Dyad for Sarah and Kira.

Hm, if only that had happened a few minutes earlier. Sarah is thrown onto an operating table with Dr. Nealon bent on taking what’s owed promptly. Rachel barges into the room and kicks everyone out, demanding that Sarah tell her where the sequence is. Sarah can’t tell what she doesn’t know, so big bad Rachel throws a fit. She smashes Kira’s bone marrow extracts and means to let Dr. Nealon go through with the procedure, but ya know what? BAD GUYS NEVER WIN, HOE!

With the help of Scott, Sarah uses the contraption that Cos made, and BAM! Rachel gets a pencil to the eye (). BOOM! Science. Sarah runs out of the operating room and off to rescue her baby.

She finds this Marian chick in Kira’s room, saying they don’t have to run because she’s given them passage out of Dyad and invites Sarah to meet her the next day. Sarah sprints out of that building like she’s on fire. I mean, would you just casually stroll out of the place that’s been holding you captive for who knows how long?

When Sarah and Kira make their getaway, the clones meet at Felix’s pad for a night of sibling bonding. Helena FINALLY gets to meet her other sisters and, for the first time since season one (?), all clones are together again. It’s probably the sweetest thing on television and the most highly anticipated event on OB to see Helena interact with her clone seestras. Oh, and there’s a hilarious dance party that will make you sob with happiness.

But I should’ve known something bad was going to happen. It’s always a dead giveaway when everyone’s happy. After a night of awesomeness, Helena sneaks out (as she’s known to do) and is nabbed almost instantly by some dudes. Fe really needs to move. His place is not secretive enough to be the Clone Clubhouse. The little deal that Paul and Mrs. S struck up earlier was, in fact, a trade. Sarah and Kira for Helena. The worst part of that is that they’re taking her off on a plane somewhere. I mean, at least stay close! Mrs. S said Sarah’s going to be very pissed when she finds out, but is she? It’ll probably take awhile before anyone suspects anything because Helena Manning is so unpredictable, it’s assumed that she just took off without a word to anyone. She’s a free spirit (much like her sisters). Also, I’m still salty about Sarah leaving Helena in jail. I know Sarah cares, but geez, would it kill her to care a little bit more?

On Sarah’s end, she meets Marian at her home. She is shocked to discover that Marian’s “daughter” is another clone named Charlotte. Charlotte appears to be self-aware and is the only surviving product of many failed attempts to recreate Dr. Ethan’s cloning cipher. Marian reveals the second half of Project LEDA: Castro = male clones. Wow, we just can’t have anything to ourselves, huh? So, there’s guy clones, huh? Wow. Okay, Manson. Okay, Fawcett. All right.

Oh, and by the way, I don’t know about you, but I was hoping that Gracie and Mark would just…disappear, but nope. They got married and, more importantly, the male clones actually have Mark’s face. So, we’ll be seeing more of those creepy eyes.

Overall, I’m happy. The pain isn’t so bad. Probably because Cos didn’t die, and it looks like they’ll have the cure soon (*CROSS YO DAMN FINGERS*).  Also, our Clone Club is still relatively intact. We’re all used to Helena being away from the group anyway, and as I’ve told you before, Helena’s the one clone nobody has to worry about.

We made it through season two, Clone Club.