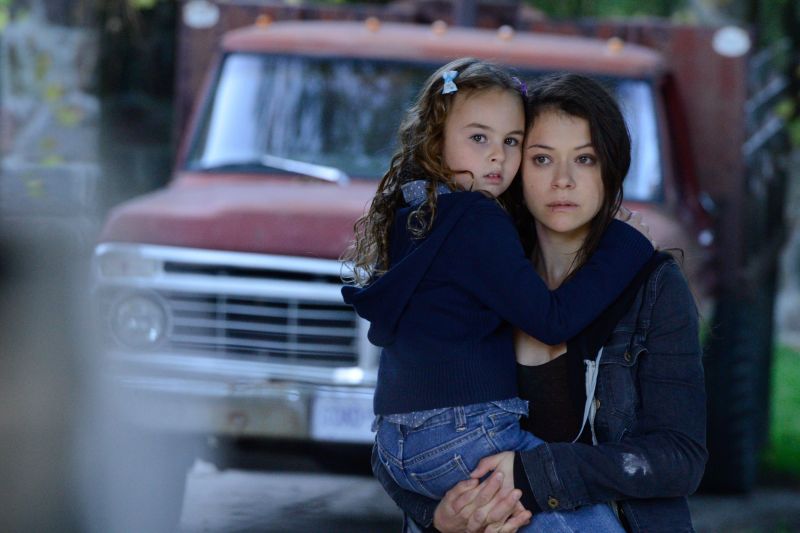 Season two is spectacular. It’s mind-blowing. Intense. Edgy. Everything. If Orphan Black was a single man, we’d be married by now on our fifteenth child because they are pulling out all of the stops to get me completely infatuated.

At the beginning of this episode, Sarah and Felix reminded me a lot of Bonnie and Clyde. They awaken, disheveled and hungry, after a night of sleeping inside of their cramped, stolen truck in the middle of the woods. A mini heist is orchestrated at a small town general store (yes like the ones from old westerns) with Kira at the center as the distraction as Fe stocked up on other goods. I mean, they’re on the run, people! There needs to be a crime spree to get the pot stirring.

Look at this face!

Intent on finding Kira a bed for the night, Sarah and Fe break into a cabin. Little did they know that cabin’s owner was in town. Now, I was wondering why Liam (Michiel Huisman) from Nashville was posing in photos with Tatiana Maslany. Turns out, he’s her baby daddy, Cal! Although Cal seems a bit distrusting toward Sarah because she stole from him years ago (8 to be exact), you can tell there’s still some kind of connection between them. He’s getting wrapped right around that finger, the same way that Paul did, but I wonder if that’s a good idea, Cal. Sarah is an exploding cigarette, as Fe said. I don’t think she intentionally, or maybe she does (TRUST NO ONE), use(s) people, but it causes me pause when I question the genuineness of her affections for anyone other than Kira and Fe. There’s love in her, but it’s so heavily guarded. She doesn’t seem to be as into Cal as he is in her. Stuff like this is really what keeps the show pulsating because nothing is certain. We know Sarah has the capacity for love, but she’s the type of person who can turn into a ghost at the drop of a hat if she thinks it’s in her or someone she loves’ best interest. Wow, look at those dimensions. Tatiana’s such a great actor! She’s so dynamic! What am I doing with myself?

Anyway, Kira’s paternity is something even Fe didn’t know. This secret throws him right off the map and into believing there isn’t a place for him in Sarah’s world. I wonder how so. Isn’t this the same level of crazy that’s very characteristically Sarah? Shouldn’t he be accustomed to this? Or is it that Fe’s somehow changed (no, not his hair, even though that is different) and doesn’t like all the lies and tricks? Is it Sarah that no longer fits into his world? Whatever the case, he hitchhikes to Glendale because Alison needs him. Her play’s tomorrow! One thing I do like about Alison is that her spots are the same color. There’s not 15 different versions of Alison running around (woah, no pun intended! I’m so cool). Alison is consistently a hot mess, and even when she’s not a hot mess, she’s lukewarm and trying to get it together. I told you she might be becoming my favorite clone!

Even though she has a meltdown, Alison has made me so proud. When I saw the preview for this episode last week, I thought she was going to cause me grief. There’s a clip of Detective Pain-in-the-Face (others may know her as Angie), clearly trying to get in Alison’s good graces to poke for information, but our girl SHUTS HER DOWN. Alison thought she was another monitor sent by Dyad because she found Teddy out. When she discovers that Pain-in-the-Face is a cop, trying to get information about Sarah and Beth, she still doesn’t cave. That’s right. The first rule of the Clone Club is that nobody knows about the Clone Club! 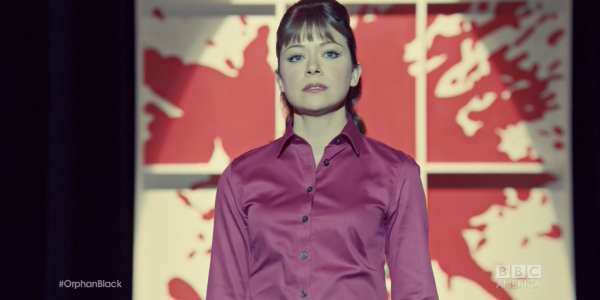 Speaking of monitors, Teddy always looks like such a joke. I mean, Paul was Beth’s monitor. Do you see Paul? Do you SEE PAUL? Ex-military. Fine as hell. Muscles galore. Smart. Cunning. Carries multiple guns at all times. And just badass. Badass to his soul! Teddy might be some of those things, but we never see him do anything cool or say anything smart! He always gets beat up by Alison. Remember when she tied him to that chair and tortured him? You know who also seems like a joke? Dr. Leekie! Dr. Leekie is like someone’s old, cooky grandpa this season. I can’t take him seriously as a villain because Cosima doesn’t take him seriously as a villain. She and Delphine basically hang out in his office all episode. I mean, guys, that’s your boss! I know, I know. I can’t even type “boss” without scuffing myself.

Anyway, back to Alison’s meltdown. Since the first episode, it’s been a domino effect, leading to her fall. She took it very hard when Fe left and, earlier that day, she had a pretty detached conversation with Cosima, who at the time was operating on another clone, Jenn’s dead body (and you know how she gets in general when she’s in Cophine Land), so it’s not like she could talk freely.

Apparently there is such a thing as too many drugs, as Alison was sipping the sauce and popping the candy for so long that, when she finally gets center stage, it results in a crash, literally in two cases and metaphorically. Good thing Fe’s right there in the audience, so maybe he can get her on track next episode. 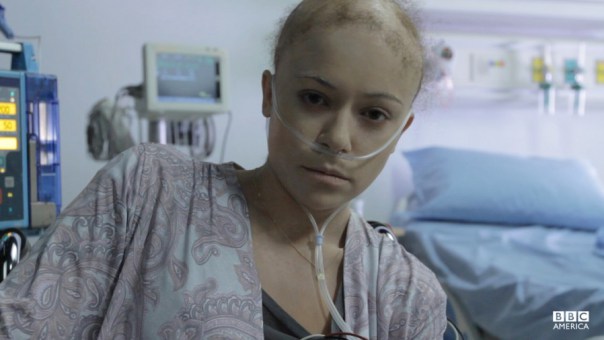 Before I get to Cosima, one last thing about Sarah. While she’s playing house in the woods, Rachel’s henchman, who’s been hot on their trails, almost makes away with Kira. He shoots a cop and almost gets shot at by Cal. Failing to take Sarah and Kira away, David makes off with Sarah alone. Cal’s now left with Kira, probably completely confused about everything. I just hope he has enough sense to get her out of there, and maybe try to find Fe, but how would he know where to go or anything? Ugh, we’ll see what he does next week.

The interesting part is that the henchman was surprised about Sarah’s photo of Mrs. S when she was working (?) with Project Leda. Isn’t Project Leda something the Dyads were working on? I guess we’ll see where that goes too. Oh, they got hit by a truck on their way back to the Institute!! I jumped out of my freaking skin when that happened! How much do you wanna bet it was those damn Prolethians?! You know what they remind me of? Have you seen Alien vs. Predator? It’s like the Dyad guys are the aliens, the Prolethians are the predators, and the clones are the humans caught in between saying, “What the hell? Just leave me alone!”

In the heart of the Dyad Institute, Cos spends this episode watching tapes that chronicle the death of Jennifer Fitzsimmons. Jenn was a clone we didn’t get to meet last season. It was pretty sad watching the illness slowly suck the life away from her, but imagine how Cos feels. Cos has the same symptoms as Jenn (wow, have you noticed I just gave this girl a nickname? Anyway…), and it’s safe to assume that she could be facing death in the not-so-distant future. There’s a race against time to find the reason behind Jenn’s death and hopefully a cure before the disease takes our Cosima away. There’s also a chance that the other clones have the same illness because it might be causing their infertility. Well, everyone except Sarah.

Which reminds me, do you think Helena can have children too? They are twins. Aren’t identical twins genetically identical? I’m asking because I think I see the inklings of a shit storm in the distance. 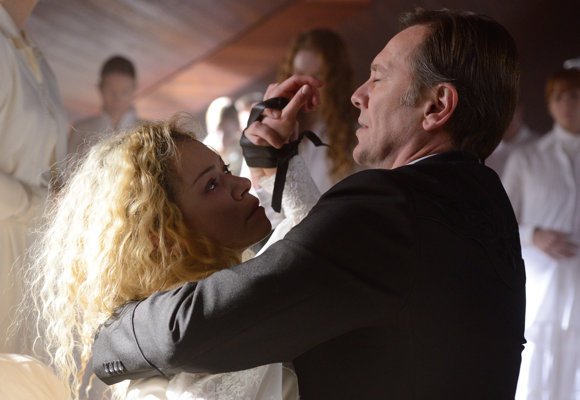 I’m not going to call it a wedding. I’m going to refer to that mess as The Debauchery because it is so incomprehensible, so tragic, who let this happen, WTF, no, everything, nothing, ARGH, where is help, can help come? They basically drug the hell out of her and force her to partake in The Debauchery. Yes, I know the actual definition of debauchery is something completely different, but I feel like that’s coming. I don’t want to say what I’m thinking, but you guys are thinking it too. No, we’re not going to talk about it because I really hope that’s not where this is going, and I can’t write that. I can’t.

The Prolethians were smart to drug Helena because if she wasn’t regaining her strength and eating those grapes, she would be carving holes into their faces. THEIR FACES! I don’t like it. I don’t like what’s happening. And do you see all those pregnant women in the background? There are at least three of them, I think. Isn’t that a lot of pregnant women at one time for a small community in the middle of nowhere, or am I just looking for problems? I might be looking for problems, but I don’t see a lot of men, just saying. *gives SIDE EYE*