October Faction Is Not What It Should Be

While the marketing for October Faction may have said it’s like The Umbrella Academy, they neglected to say that it’s like the worst parts of The Umbrella Academy. And, in fact, it’s this issue with the show that’s indicative of a problem I’m having with modern television, especially series that claim to have some degree of drama to them. Someone needs to be informed that you can just have a fun show, that people don’t have to have these deep emotional wounds, and that angst is not inherently interesting. 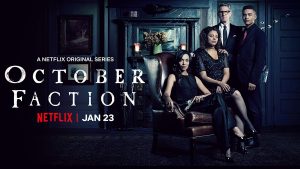 Let me be very clear, I went into October Faction thinking it was going to be like Men in Black, but with monsters. An adult version of The Troop, if you’ll pardon a slightly obscure reference. A fun show where they hunted monsters of the week and showed off cool gadgets. Even after the first episode, it seemed like they would be doing a more down-to-earth version of that idea, with them using mostly high-tech guns and that the monsters would be a lot more hidden and human-like. I was fine with that, too. The monster hunters being an old married couple with kids was also a nice twist—and their romance was cute if a little odd at times.

But that went out—they ruined the romance. They simply didn’t deliver. There’s good stuff, but the good stuff is not what dominates the story. What I got was a superpower teenage angst plot that I’ve seen a billion times, paired with a daddy issue/old wounds story that isn’t why I’m watching a monster-hunting show. We don’t even get to see a lot of it when it’s happening. They cut away! And, for lore people: that’s squandered, too. The main characters are established secret agents with years under their belt, so they don’t really explain anything because they already know—which is fine, but I don’t know anything and there needs to be an audience surrogate. It’s a unique enough world that expecting genre savviness in an audience isn’t a reliable shortcut. It seems like the kids might eventually learn the secret and that will get the audience up to speed, but they went too long and now I almost don’t care. 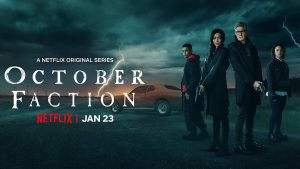 And the powers—can we just have a show without powers? They don’t need it. Monster hunting by ordinary people, but being well-trained, is infinitely more interesting.

There’s just no point where this show doesn’t undermine itself.

Romances tainted. Friendships that could be endearing and interesting but dissolved by betrayal. Unique monster ideas barely explored. In short, all fun destroyed for the sake of drama and angst. Shows about people who deal with a secret world while balancing normal life are a dime a dozen, but when done well it can be a wonderful subgenre full of engaging stories and imaginative ideas. Buffy the Vampire Slayer, Warehouse 13, American Dragon: Jake Long, are all part of that subgenre, and all worth watching—but unless October Faction can sell me on why it’s not something I’ve seen a billion times before, how it’s actually unique, then it’s just a passable show with cool vampire designs and good actors, and that’s not enough for me to recommend it. You deserve a better show. 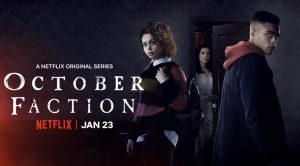